Larry Wilkerson: The Senate passed a good amendment to NDAA but a terrible resolution on Iran; Susan Rice should be opposed on policy issues, not GOP rhetoric

Larry Wilkerson: The Senate passed a good amendment to NDAA but a terrible resolution on Iran; Susan Rice should be opposed on policy issues, not GOP rhetoric 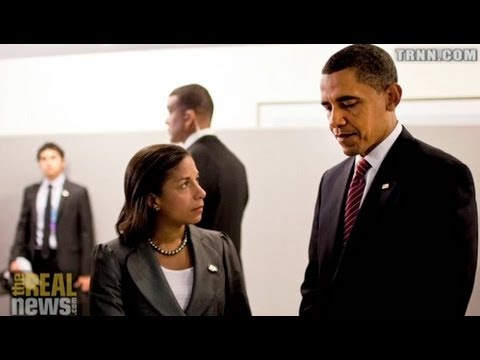 Larry Wilkerson is the former chief of staff for U.S. Secretary of State Colin Powell. He’s currently an adjunct professor of government at the College of William & Mary and a regular contributor to Real News. Thanks for joining us, Larry.

JAY: So what do you got for us this week, Larry?

WILKERSON: The National Defense Authorization Act once again is drawing things to it, even though Reid would like to keep them from it. Besides the inane questions and comments by senators McCain and Graham, amongst others, about Susan Rice, [her] potential nomination for secretary of state, there’s the National Defense Authorization Act working its way through the Congress. And there are a couple of amendments, apparently, that Senator Reid is trying to keep away, I think. One is a positive one which would strip out the previous amendment to the same act, as I recall, which allowed forces inside the United States, including the military, as I understand it, to go after those in the United States who were providing material support to terrorismâ€”that ambiguous phraseâ€”and they would be able to detain them indefinitely. I’d love to see that stripped out. I think the Senate probably finally came to its senses and realized how stupid that was, howâ€”curtailing of our civil liberties.

The other one, potential amendment, is not positive at all, and it’s been tried before, too, and it would essentially insert language into the bill that would make the United States’ potential to go to war with Iran, to use the military instrument against Iran, far more likely. And I think that’s a bad one.

JAY: What’s the specifics of that? How does it do that?

WILKERSON: Well, it’s the language. The language previously was sort of countered. I think it was John Conyers who did it. Maybe I’m wrong on that, but I think it was Conyers. It was countered by language thatâ€”a sentence that was added at the end of it that said something like, none of this shall be construed as authorization to use force against Iran or to go to war with Iran. That language is not there this time.

What itâ€”the language essentially says that no matter what happens, if we think Iran is getting ready to have a nuclear weapon, we have to go to war with her. I mean, that’s really what the language is aimed at.

DENNIS KUCINICH, U.S. MEMBER OF CONGRESS: The NDAA authorizes war against Iran. It calls for a new policy, military action, which puts U.S. aircraft and munitions into position for air- and sea-based missions.

WILKERSON: That’s really what the language is aimed at, to tie the president’s hands completely into a position that would say, okay, not only are all options on the table; the options of diplomacy and so forth having failed, we’re going to war.

JAY: And what’sâ€”based on what is that decision supposed to be made? I mean, so far, American intelligence agencies have yet to say there is a plan in Iran to have a bomb. So what are they going to base this on?

WILKERSON: Well, there, Paul, you have the crux of the matter: who is going to make this decision that all other options have been exhausted?

I would suggest to you that if we don’t have an incident in the interim that starts a conflict, or at least looks like it’s going to start one, then what we’ll have is an exhaustion of this president’s patience, and we’ll either move to the point where Iranâ€”because of something we do, probablyâ€”kicks out IAEA inspectors, takes down the cameras and so forth that are associated with them, and moves off to, as fast as she can, develop a nuclear weapons capabilityâ€”not a nuclear capability; she already has a nuclear capability. So I see it as being not helpful to diplomacy, which I’m sure some of these cretins in the Congress believe it to be, but as being injurious to diplomacy.

If we don’t back off soon in terms of what we’re demanding, and if we aren’t able to give Iran a quid pro quo for their doing what we want them to doâ€”and that quid pro quo has to be some sanctions relief, and not just cosmetic relief; it has to be significant reliefâ€”then there’s no possibility of diplomacy working.

JAY: Let’s go back to this issue of Susan Rice. The rhetoric the Republicans have been hurling at Rice about the Benghazi thing I think on the face of it is pretty dumb, as you said, and clearly political. But what do you make of her as a possible secretary of state? I interviewed her in New Hampshire during the primaries in 2008, and she’sâ€”was very gung ho in supporting an expansion of the war in Afghanistan. She’s kind of known to be someone who advocates this sort of humanitarian imperialism, some people have called it.

SUSAN RICE, SENIOR FOREIGN POLICY ADVISER TO SEN. BARACK OBAMA: Not by itself. I mean, I mentioned veryâ€”I said, coupled with the economic and political steps.

JAY: So what would be concrete steps?

RICE: Well, we have underinvested in Pakistan and Afghanistan, but particularly Afghanistan, with respect to the counterterrorism effort. We haven’t done the socio and economic investments in infrastructure and education in alternatives to poppy.

JAY: Does her outlook on world affairs concern youâ€”not the Benghazi stuff, but more her geopolitical outlook?

WILKERSON: Let me just say this, Paul. I don’t know her at all, so that’s the first caveat. I don’t think I’ve ever met the lady.

That said, I have heard from a lot of foreign service officers and others whose views I trust and respect, and I’ve heard from both those leaning toward the liberal side of things and those leaning towards the conservative side of things, and their objections to her are nothing like what McCain and Graham and others are saying. Their objections to her are along the lines of what you’ve just talked about. She’s the Samantha Power, if you will, of the UN right now. She wants to do everything possible with U.S. Armed Forces to prevent humanitarian problems, to prevent dictators from doing things to their people, and so forth and so on. Atrocities Prevention Board is one of the products that has come out of that. And this business of using the Armed Forces for those kinds of activities, generally speaking, I object to.

More to the point of her personality, I’ve heard that she is, as one foreign service officer put it, more like Madeleine Albrightâ€”and he didn’t mean that in a complimentary way. He meant that veryâ€”you may recall in Secretary Powell’s book, General Powell’s book, My American Journey, he talks about Madeleine telling him that he was always talking about his Armed Forces, why couldn’t she use them sometimes. That really made him apoplectic, as you might imagine. Any soldier would feel that way.

So her personality, her penchant towards using the Armed Forces for other than national interest and so forth are things that I would object to.

And if people were going to object to her, I wish they’d start bringing some of these things out, rather than the petty stuff they’re bringing out. The Benghazi affair is so ludicrous in terms of what McCain and Graham and others have said about it, and other Republicans as well, that it just makes youâ€”it makes you wonder where their brains are.

JAY: When I interviewed her in New Hampshire, I was primarily focused on candidate Obama’s position on the Afghan War, essentially to expand it, and I asked her, well, doesn’t thereâ€”if you’re going to expand, don’t you really have to expand solving problems facing the Afghan people in a serious way? A lot of rhetoric’s been thrown around about doing something to win the hearts and minds of Afghanistan, the Afghans, but very little in terms of real money and real on-the-ground action. She kind of said, oh, yeah, yeah, yeah, and kind of dismissed it. Her main argument was about increasing troop levels.

And then, at the end of the interview, I said candidate Obama is promising change we can believe in. He’s even talked about a whole think and approach to U.S. foreign policy. And I said, well, doesn’t that require at least questioning the whole role of the United States in terms of being the dominant power and projecting U.S. power around the world. And she took her microphone off and says, I don’t have time for this, I don’t have to do this, and she walked out of the interview.

WILKERSON: That’s another reflection of the personality and the character I’m being told about by these foreign service officers, who say she’s acerbic. At one point she extended her middle finger to an assistant secretary at the other end of the table, I’m told. She is not a diplomat by any measure, unless you consider throwing someone into a field of mines and saying, walk through it, babyâ€”maybe she might be able to do that alright. But I’m just hearing really bad things about her in terms of her ability to negotiate, to get along, to cooperate, to engage, and so forth and so on. And what you just described to me is a demonstration of that.

JAY: Right. Okay. We’ll see how this unfolds. Thanks very much for joining us this week, Larry.

WILKERSON: Sure. Good to be with you.

JAY: And thank you for joining us on The Real News Network. Don’t forget, to see more programming like this, we need to match ourâ€”get to our grant challenge. So please click on the Donate button, ’cause if you don’t click it, we can’t do this.