Pt. 1 US & Iran Move Closer to Negotiations But Neo-Con Objectives Attempt to Pull Them Apart

Larry Wilkerson: Senators Graham and McCain represent a strong opposition backed by Israeli lobby looking to knock down Iran as a regional power

Larry Wilkerson: Senators Graham and McCain represent a strong opposition backed by Israeli lobby looking to knock down Iran as a regional power 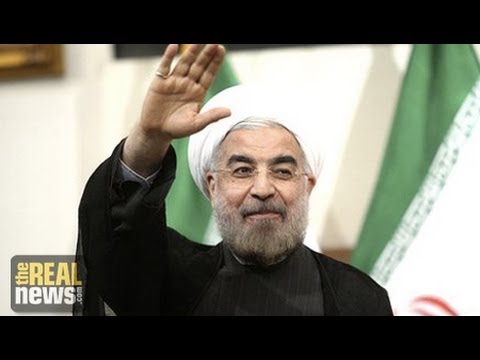 JESSICA DESVARIEUX, TRNN PRODUCER: Welcome to The Real News Network. I’m Jessica Desvarieux in Baltimore. And welcome to this edition of The Wilkerson Report.

Now joining us is Larry Wilkerson. He was the former chief of staff to Colin Powell and is an adjunct professor at William & Mary College.

Thanks for being with us, Larry.

DESVARIEUX: So, Larry, what we’d like to discuss this week is the Iranian government’s attempts to thaw relations with the U.S. They’ve actually sent out Rosh Hashanah greetings to Jews. They’ve sent worldwide–they’ve released political prisoners, exchanged letters with President Obama, praised flexibility in negotiations, and transferred responsibility for nuclear negotiations from the conservatives in the military to the Foreign Ministry. So a lot of people are talking that this could be a real change of Iranian attitude. What do you make of this? Does this represent a real opening for a deal?

I think President Obama has done the proper things. I think the exchange of letters probably, if we knew what those letters said, would cement this new opening.

And I hope we go positively from here on. I know there are people arrayed across the spectrum in this country–and certainly there are similar people in Iran–who don’t want negotiations to succeed, so it’ll be a tough route. But I hope it shows some progress, and I hope it ultimately produces a diplomatic solution.

DESVARIEUX: And that diplomatic solution, to you, what do you see actually being a concrete deal that you think both sides could agree to?

WILKERSON: That’s been there. It’s been there for years, decades, even. All Iran has to do is limit its enrichment to what would be normally done under a civilian program, under probably at the outset and for a couple of years (maybe five) very rigorous inspection and immediate access to anywhere by the IAEA until Iran has substantiated to the international community that its program is purely civilian, in exchange for substantial sanctions relief. The outlines of a deal, indeed, the specifics of a deal have been there for some time.

DESVARIEUX: And who would be opposed to a deal like that? And why?

WILKERSON: First and foremost, Prime Minister Netanyahu and his extremely right-wing government in Tel Aviv. If you’ve seen what they’ve laid down as their deal parameters, if you will, it leads off with no enrichment at all, that is to say, they do not want any nuclear program whatsoever in Iran.

And then you come to this country and you find Netanyahu’s allies in people like Senator John McCain, Senator Lindsey Graham from my home state, and others who are bordering on being traitors, in my view, because they won’t let this president have room to achieve a diplomatic solution. They’re all angry now that he didn’t bomb Syria, that he in fact, in conjunction with Putin, came up with a deal that may be extremely challenging to implement. But nonetheless it’s kept the bombs from dropping, which is a good thing. And so they’re moving on to Iran, with Graham even saying he’s going to move for legislation to authorize the use of military force against Iran in the next four to five months. So these people are bordering on being traitors. And those who would say, well, they’re just good Republicans trying to keep up the pressure on Iran so that Iran will negotiate and negotiate in good faith, that’s preposterous. We’re to the point now where everybody needs to put down his 0.45 caliber pistol and walk [incompr.] table and begin to negotiate in good faith. And people like Lindsey Graham and John McCain need to sit down, recede into the background, if you will, and shut their mouths.

DESVARIEUX: And when you have people like Lindsey Graham and John McCain coming out and really advocating for military strikes against Iran, you can’t help but think of Chuck Hagel, currently now our defense secretary. But during his confirmation hearing, you heard a lot about his remarks in the past about how the GOP and Congress actually really is under the intimidation–or being intimidated, I should say, by AIPAC and other lobbying groups there on the Hill who are very pro-Israeli politics and things of that nature. Do you feel like them coming out with these types of remarks and proposed legislation is just really feeding to that whole argument?

WILKERSON: Absolutely. When Chuck Hagel was being asked by Senator Graham during his confirmation hearing to cite one time, one time that Israel had been influential on U.S. policy, all Senator Hagel had to say was you now, Mr. Graham. That’s all he had to say. Of course, he could have cited Ronald Reagan’s inability to sell F-15s to Saudi Arabia, to give AWACS to Saudi Arabia, and so forth, all of which AIPAC and the Jewish lobby in this country stopped. So Israel has an enormous impact on U.S. foreign policy, but it’s beginning to be so detrimental to U.S. foreign and security policy that people like John McCain and Lindsey Graham, with their hands out to the Jewish lobby for more donations to their PACs and so forth, just simply need to shut up and go back into the dark shadows from whence they emerged.

DESVARIEUX: Okay. Well, we’ll certainly be continuing this conversation in our extended version of The Wilkerson Report. So if you’re interested in that, viewers, please stay tuned.

But thank you so much for joining us, Larry.