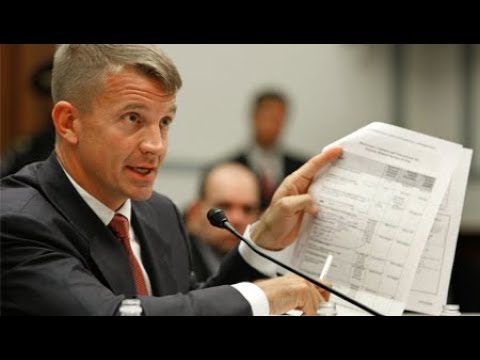 SHARMINI PERIES: It’s The Real News Network. I’m Sharmini Peries, coming to you from Baltimore. Former Blackwater CEO, Erik Prince, is making waves after penning an op-ed in the New York Times on Wednesday. He was calling on Donald Trump to adopt using private mercenaries to lead the war in Afghanistan. This is the second such major op-ed that Prince has penned in the last month or so. The last one was in the Financial Times. And of course, one in Fox News as well. I would say that Prince has a pretty good PR firm behind him given the mainstream newspapers that he’s getting a chance to pen op-eds in. And of course this allows him to revive his charred reputation. Prince previously headed the infamous Blackwater company that was mired in controversy. Most notably, was responsible for a massacre of civilians in Iraq in Nisour Square.

Joining us now to discuss this is Larry Wilkerson. Larry, as you know, was former chief of staff to the Secretary of State Colin Powell. Thank you so much for joining us today, Larry.

And I know you have a very short window with us, so let me jump right to the question and ask you: What do you make of this op-ed that’s been penned by Erik Prince in the New York Times? And what do you make of the advice he’s giving Trump as well as the space that Prince has been given in the Times that there is a lot of controversy around right now?

LARRY WILKERSON: I think, as I’ve said many times before, that this is privatizing the ultimate public function, which is to kill people for state purposes–war. I think this is a dangerous, if not the most dangerous, path we’ve contemplated in a long time to go down. It’s incredible that the London Financial Times some months ago gave Erik Prince editorial space to talk about doing this for Europe’s problem with regard to Libyan refugees. One can only imagine what Erik Prince was going to do in order to stop those refugees. And now, the New York Times giving him space. It’s incredible that this man, who is worse than the British East India Company’s worst dreams and nightmares, is allowed to write in what are supposed to be the prestigious newspapers in the English-speaking world.

SHARMINI PERIES: Larry, let me read what Erik Prince had actually penned in this editorial in the New York Times, a section of it. He writes:

“The ‘new’ strategy that the president adopted last week would reportedly increase authorized troop levels from 8,400 to around 12,400. This will merely continue the conflict. And no one can seriously argue that this strategy won’t inevitably require more spending, more troops and more casualties. In a war that has already lasted twice as long as Vietnam, is this the ‘new’ strategy we want?” He says.

Give us your response to that.

LARRY WILKERSON: Well, we can’t fight wars anymore without contractors. That’s the sad state of the all-volunteer force and the number of people we actually have in the land forces, in particular, of the military. But I recall what Colin Powell told me a few years ago when one of the new chairman of the joint chiefs of staff had just called him and asked him, what would be the first couple of things he would do were he chairman again? And Colin didn’t hesitate and said, “I’d see how many people I have on private contract, and I’d fire half of them. And then I’d look at the other half for potential firing of them.”

In other words, DOD has no idea where billions, perhaps even larger than that, dollars are going in terms of private contractors, what they’re paying them, what they’re doing, where they’re operating, and so forth. But the bottom line is, because of the size of the military today, you can’t do war without contractors in the war zone. But that certainly doesn’t mean you need to go the next step and turn the war over to them exclusively.

SHARMINI PERIES: All right. Now, you teach in this area at the university, and also you’ve taught at the military academy. What is the take on the part of the military in terms of using contractors? Or is this a false dichotomy? Are they all merged at this point when the U.S. considers war in countries like Afghanistan?

LRRY WILKERSON: Oh, I think the professional military looks at contractors as a necessary evil in terms of the size of the military and its need to free up troops, therefore, to be able to shoulder the burden of the military, fighting, in other words. And that’s cooking, that’s washing clothes, that’s doing the kinds of things that the military is relieved of having to do by having these contractors. But that’s not out there fighting for them. That’s not out there killing for them.

There’s a lot of problems in that with the professional military, which you just suggested. There’s jealousy, for example, in the fact that maybe that private’s getting paid $30,000 a year, and that private contractor’s getting paid upwards of $120,000, $130,000 a year. There’s also the difference in law prevailing over contractors at war, as it were, and military at war. There’s also the difference in jobs that are handled by the military as opposed to jobs that are handled by the contractors.

And I find it really … I was almost laughing reading Erik Prince’s supposed excursion into history, talking about Claire Chennault and the Flying Tigers and so forth. That is an utterly ridiculous comparison. It shows Erik Prince up for what he is.

Claire Chennault and the Flying Tigers and those brave young men who flew war planes over to Britain in the beginning of World War II, and who actually went over and flew in the Royal Air Force for Britain in the Battle of Britain, they were defending the United States of America against a heinous enemy that threatened to topple us all. And they were the leading element of Franklin Roosevelt’s ability to try and understand and get the American people to understand that we might be fighting a two-front war. We didn’t want China to be a wholly-owned subsidiary of Japan, and we certainly didn’t want Britain to collapse. That was an utterly ridiculous historical analogy that Erik Prince tried to draw. His people are no Claire Chennaults, and they’re not the boys that flew those airplanes for the British in the Battle of Britain.

SHARMINI PERIES: Right. Now, Larry, since President Trump made the speech last week, there’s been a lot of talk about the increase of troops from what it is reported now, from 8,400 to around 12,400 troops. And also the fact that he didn’t put an end date. I know you talked to Paul Jay about this when you guys went live last week on this. But give us a sense of what this kind of troop increment as well as this not putting a deadline on ending this war means for us.

LARRY WILKERSON: Well, it’s all political for President Trump, of course. It’s to differentiate him from President Obama, and to demonstrate to the American people, such as those that are still on his side. I saw the polls yesterday, they’re getting even lower and lower. He’s gonna rival the congress pretty soon with single-digit poll ratings.

But what it is, it’s to say: I’m smarter than President Obama ’cause I don’t give timelines and I don’t give dates certain and I don’t give numbers out, and so forth and so on. That might be smart in an operational professional military sense. Sometimes in a political sense it makes no rhyme or reason at all, though. In this case I think we’re talking about, is we’re talking about a tactical situation where the United States wants to look, and President Trump in particular wants to look because he now owns Afghanistan, he now owns this war, he wants to look like he knows what he’s doing.

So on the tactical side of the coin, he wants enough troops over there to make it look as if the Taliban are losing territory, maybe they’re being compelled to political talks and so forth. I mean, after all Donald Trump’s got is about three-and-some-change years left in the White House by anyone’s sane reasoning. So that’s all he’s gotta do is survive that time, and he can leave the White House and he won’t have owned the war to an extent that it looks really bad for him.

The bigger strategic situation, which you just suggested, I discussed with Paul Jay, is I don’t think we’re gonna leave Afghanistan anytime soon. And this is just the camel’s nose under the tent, so to speak; although, we’ve been doing that for 16 years. We’re gonna stay there for 50 years or longer.