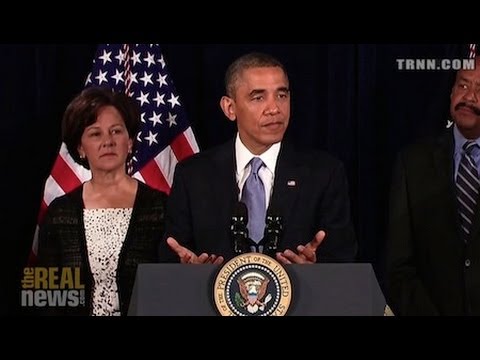 Today, President Obama defended his surveillance programs. Here’s a little bit of what he had to say.

BARACK OBAMA, U.S. PRESIDENT: When I came into this office, I made two commitments that are more important than any commitment I make, number one, to keep the American people safe, and number two, to uphold the Constitution, and that includes what I consider to be a constitutional right to privacy and an observance of civil liberties.

When it comes to telephone calls, every member of Congress has been briefed on this program. With respect to all these programs, the relevant intelligence committees are fully briefed on these programs. These are programs that have been authorized by broad bipartisan majorities repeatedly since 2006.

When it comes to telephone calls, nobody is listening to your telephone calls. That’s not what this program’s about. As was indicated, what the intelligence community is doing is looking at phone numbers and durations of calls. They are not looking at people’s names and they’re not looking at content. But by sifting through this so-called metadata, they may identify potential leads with respect to folks who might engage in terrorism. If these folks, if the intelligence community then actually wants to listen to a phone call, they’ve got to go back to a federal judge, just like they would in a criminal investigation.

JAY: Now joining us from his home in Virginia to discuss all of these issues is Larry Wilkerson. He was the former chief of staff for U.S. Secretary of State Colin Powell. He’s currently an adjunct professor of government at the College of William & Mary.

Thanks very much for joining us.

JAY: So what do you make of President Obama’s defense that it’s necessary for American safety, it’s a limited program, it’s not violating or threatening anyone’s constitutional rights?

WILKERSON: Well, he said he had two objectives, as you indicated–to make the American people safe and to uphold the Constitution. Well, the premise there is that the American people are unsafe. I think that’s a very [snip] from a lot of perspectives, but the least place, probably, we’re unsafe is from terrorist attack, which is the implication of his remarks, that our counterterrorism program and thus the safety of the American people requires this kind of intrusive surveillance.

I think that’s preposterous. I say what I’ve said publicly many times before: more people are killed on our highways every year than have ever been killed in the entire history of terrorist attacks on the United States.

WILKERSON: Well, that’s equally preposterous, whether it comes out of the mouth of Richard Cheney or Barack Obama. I will give President Obama credit for listening to his advisers and being swayed by them, but that’s not necessarily where the truth lies.

What’s caused al-Qaeda and groups like al-Qaeda who might at one time or another had some intent on an attack in the United States and might still harbor such intent to not be able to do so has been the military’s very, very robust disrupting of their networks and their actual operatives, combined with some really sophisticated financial efforts to freeze their funds, or at least their ability to access their funds.

JAY: So he’s saying that it’s a limited program, that even if they’re amassing all this data, they’re not accessing it, except for specific cases, for specific reasons, with some foreknowledge that there’s going some kind of plot or reason to do so, and people shouldn’t worry that everybody’s phone calls and emails are all amassed there.

WILKERSON: Well, he’s right, but he’s disingenuous in his correctness. I’ve been on the Liberty and Security Subcommittee of the Constitution Project for over a couple of years, and we’ve looked at this very, very closely. And you make statements like that. I hope the president knows that he’s making that statement very ambiguously, because he said–and you parse his words as you parse Bill Clinton’s words about a certain intern, and you find out he said that they’re not listening to American phone calls, not listening to American traffic over the communications networks, not reading emails even. That’s probably true. What they’re doing is gathering all this so-called metadata, storing it, and then applying algorithms to it, the length and breadth and specifics of which we have no way of knowing, and extracting data when and if the algorithm tells them it needs extracting.

And so he’s right. They’re not listening to phone calls. But they’re storing those phone calls and they might listen to them in the future. And is there probable cause? Is there reasonable suspicion? Even more so, is there a warrant to do that? No. In most cases they just do it.

JAY: Do we know anything about where all this is coming from? Clearly somebody is leaking it and taking enormous risk given the Obama administration’s attempts to go after whistleblowers. I mean, there’s no reason why the administration itself would want to leak this kind of stuff, is there?

WILKERSON: I’m very curious to find out what evolves here, because it could be people on the right who are leaking this in order to further embroil the president in what are really sort of meaningless little controversies, but nonetheless added up become quite large, and to further weaken him, or it could be genuine whistleblowers as we had before, like Tom Drake at the NSA. And if that’s it, I really fear for them, because they are really risking a lot given this administration’s draconian pursuit of whistleblowers. I applaud their action, but I really worry about them if this is a genuine effort to expose what shouldn’t be happening, what is against the law, as a matter of fact, at the NSA.

JAY: Just do a quick summary of what we know so far.

WILKERSON: As far as I can see, what’s been revealed is what we at the Constitution Project had been looking at for some time. And the gist of the big part of it is that they are and have spent billions to prepare the facilities for doing so, storing almost every communication that extends across the breadth of the United States, whether it be emails, phone calls, cell, or home lines, or whatever. And they are doing this in an attempt to always have accessible that information which an algorithm or some other technological means applied to the metadatabase would reveal has some connection to terrorism. All the other calls that are about financial situations, about just talking to your brother-in-law, or whatever, they will never be touched, because they aren’t subject to this algorithm’s ferreting them out.

JAY: And in other words, this–I think people should never forget this is a country that had a House Un-American Activities Committee and a Senator McCarthy. It’s not impossible to imagine a situation where this target, the targets for such intelligence could be dissent within America.

WILKERSON: Absolutely. I mean, if you get a political apparatus above this that decides it wants to do some digging in this database for political purposes, they will do it, I guarantee you. No surer thing, no surer idea from our founding fathers comes forth from study of them. They knew that power, if it could be abused, would be abused, and they knew that men, and now women, would do that abusing. It’s that simple.

But I go back to my original point. Are we really so unsafe from these terrorists that raise their heads from time to time around the world as is indicated by our government? And another point, which you’ve made many times, Paul, is if we are unsafe to the degree we should sacrifice some civil liberties, what is making us that unsafe? Is it our policies overseas? Or is it the fact that the terrorists hate our freedom and our way of life? I would submit it’s our policies overseas that are making these terrorists want to attack us more so than it is anything we believe in. So there are two premises here that are just fraught with problems.

JAY: Yeah. I’ve–just to add to that, I think it’s the height of hypocrisy to see, you know, The New York Times and The Washington Post and many other places that were–cheerleaded one war or the other or both and essentially excuse, justify, rationalize this national security state that’s come into being since World War II and all the foreign policy that goes with it. In other words, you can’t have it both ways. If you want to be the world hegemon, you had better expect some blowback, and you can’t then, you know, cry about–that you’ve got now an intelligence state.

WILKERSON: This seems to me to be not a genuine concern about national security but a building up incrementally of a sweeping ability of the government to become Big Brother, to look at Americans all the time and any time, and to do it for whatever purpose that any particular president might deem feasible. The threat simply isn’t there to generate this kind of abuse of civil liberties or surrendering of civil liberties. And one of the reasons, as you pointed out and as I agreed with, that we’re having what we are having in terms of jeopardizing our safety and our security is being generated mostly by our own foreign policy overseas.

JAY: Alright. Thanks for joining us, Larry.

WILKERSON: Thanks for having me, Paul.