Lawrence Wilkerson: Egypt, Bahrain, Qatar and Saudi Arabia are far more important than Israel to US strategic interests from view of US military

Lawrence Wilkerson: Egypt, Bahrain, Qatar and Saudi Arabia are far more important than Israel to US strategic interests from view of US military 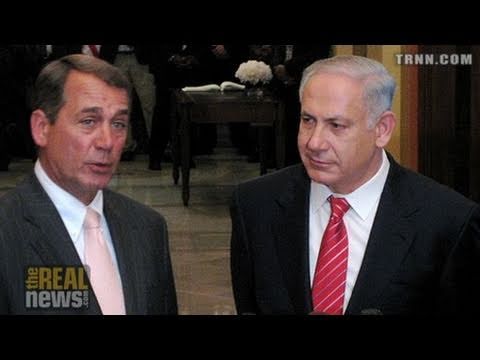 PAUL JAY, SENIOR EDITOR, TRNN: Welcome to The Real News Network. I’m Paul Jay in Washington. On Tuesday, May 24, when Israeli Prime Minister Benjamin Netanyahu spoke to the American Congress, he received no less than 26 standing ovations. Now joining us to talk about this reception in Congress and the American coverage in the news media of Netanyahu’s speech is Larry Wilkerson. Thanks for joining us, Larry.

LAWRENCE WILKERSON, FMR. CHIEF OF STAFF TO COLIN POWELL: Thanks for having me.

JAY: And I’m sure everyone knows Larry was Colin Powell’s chief of staff. He now teaches in a couple of universities in Washington and is an expert on national security and foreign policy issues. Now, go back into days when you were in the State Department and the military college. In terms of US strategic thinking, the importance of Israel in terms of the traditional US view of the Middle East, which means we need to have this kind of dominant position in the Middle East, Israel’s an important pillar of that. Has that thinking changed in any way?

WILKERSON: Well, it’s got to be altering right now, because more important than Israel was Egypt. The Bright Star exercises the transshipment, the agreements, the things that we had going on with Egypt, not to mention military sales. My colleagues in the Army joke that Egypt has more M1 tanks than we do. Egypt was a far more important partner in Israel, apart from nuclear weapons. Egypt was the real stable partner for the United States in the region, other than Saudi Arabia, other than Bahrain, where the Fifth Fleet headquarters is, and Qatar, where we have a large airfield. So these pieces of the puzzle, the strategic puzzle for the United States’ forward presence in the Middle East and Western Asia, is beginning to fall apart and could fall apart a lot further a lot faster if we don’t handle this correctly. So when I get asked this question by American audiences as to whether Israel is important strategically, I say absolutely not. Let’s look at what is important strategically. It might be untenable, but Bahrain, Qatar, Saudi Arabia, and Egypt are important strategically. Israel is not important. Israel is important from a value point of–.

JAY: And do you hear this quietly? I mean–.

WILKERSON: You don’t speak about it. You’ll be called an anti-Semite, first, and second, you will be ostracized and you won’t go much further in your career. If David Petraeus, a four-star general, retracts–or steps back, at least–from statements about how the failure to solve the Israeli-Palestinian problem is killing American soldiers on the battlefield, my God, who’s going to come forward and say anything?

JAY: Yeah, it’s an unsinkable aircraft carrier. You’ve got a military force with such might that in the worst-case scenario, it’s a bit of a gun that can be pointed somewhere in the Middle East, and it has been so.

WILKERSON: Yes, a military force, the IDF, which is powerful and can be pointed, but is increasingly irrelevant to the real threat, because the real threat is not an Arab army perched on Israel’s border about to invade, whether from the Sinai, from Iraq’s old position, or some other place, Syria for example. The real threat to Israel is the same threat we have developing–already developed quite well in Afghanistan and the threat we tried to deal with in Iraq. It’s insurgency, it’s terrorists, it’s people fighting asymmetric, irregular war–read, Hezbollah, for Israel, writ large. This is not a force, a threat the IDF deals with very successfully. No one understands that better than the IDF. So if Israel wants peace, its best bet is trying to attenuate that threat, not marshaling its conventional army to fight what is essentially a nonexistent conventional threat.

JAY: And the other threat, if you will, to entrenched interests is millions of people coming up in the streets. And it doesn’t matter what military force you have–you can’t do anything with it.

WILKERSON: I can’t imagine Tel Aviv’s tension and the feeling of unease in these last few weeks of the Arab Spring, so-called, because on one flank, Egypt disappears; on another, there’s a war in Libya; on another, Bahrain looks like it’s threatened (and the Fifth Fleet headquarters of the United States); Saudi Arabia starts making statements and writes op-eds about how the United States is not a reliable security partner anymore. Things are beginning to unravel for Tel Aviv [incompr.]

JAY: So how does President Obama and the State Department, if they’re trying to steer a somewhat more rational–I would call a rational course, how do you deal with a Congress as rabid as this?

WILKERSON: That’s a good question. Extremely difficult. And I think that’s one reason why we are going to see not much consultations with the Congress when we go forward with any kind of policy that might have a possibility of being successful.

JAY: And if Obama thought he had any leverage with Netanyahu after this speech in this Congress, it seems to have evaporated, with an American election coming up, too.

WILKERSON: I do take some heart, though, from this poll results, if they’re reflective of the truth in Israel, that 57 percent of Israelis–.

JAY: But it doesn’t mean they disagreed with what he said [crosstalk] because my understanding of Israeli public opinion right now is he–probably more than 57 percent agree with what he said.

WILKERSON: Yeah. I’m not so sure about that. I’m really not.

JAY: Now, the other part of this that hasn’t been talked about much in the press is the sort of domestic politics of Israel, the domestic politics of US, and how they interact with each other. And what I mean by that specifically is Netanyahu was invited to Congress by Boehner, Republican speaker of the House. This Republican-Likud connection versus the Democrats and Obama, how much is that part of what we [crosstalk]

WILKERSON: I think it’s a huge part. I think the Republicans, my party–. I’ll say this again. I’ve said it for a couple of years now. My party’s self-destructing. My party’s falling apart. They can’t find a presidential candidate. If you’ve been following Rolling Stone and some of the other articles about Roger Ailes and Fox, he’s losing his network, he’s losing his audience, and he’s clearly motivated by profit and power, so he’s going to switch his tactics. How do you get this together [crosstalk]

JAY: They just lost this race in northern New York.

WILKERSON: Yeah. How do you get all this together and put your party back together for 2012? President Obama and his team must be chortling in terms of the politics [crosstalk]

JAY: Yeah, one of the Sunday pundits was saying they’re probably wishing they could nominate Netanyahu as the Republican nominee.

WILKERSON: Yeah, they probably do. No. Your point that the Republicans were behind a lot of this is true. But I have to say, I didn’t watch the address to the Congress, but my wife did, and she said, let me tell you, Larry, there were as many Democrats standing up and clapping as there were Republicans.

JAY: No, there was a competition between Democrats and Republicans on who could applaud the loudest. Thanks for joining us.