Cheney killed an Iranian peace offer, pushed a New Cold War with China, and planned regime change in Iraq, Iran and North Korea - says Larry Wilkerson, depicted in the film VICE and former Chief of Staff to Sec. State Colin Powell - a REPLAY of a 2010 interview by Paul Jay

Cheney killed an Iranian peace offer, pushed a New Cold War with China, and planned regime change in Iraq, Iran and North Korea - says Larry Wilkerson, depicted in the film VICE and former Chief of Staff to Sec. State Colin Powell - a REPLAY of a 2010 interview by Paul Jay

Wilkerson on the Real “Vice” - Cheney 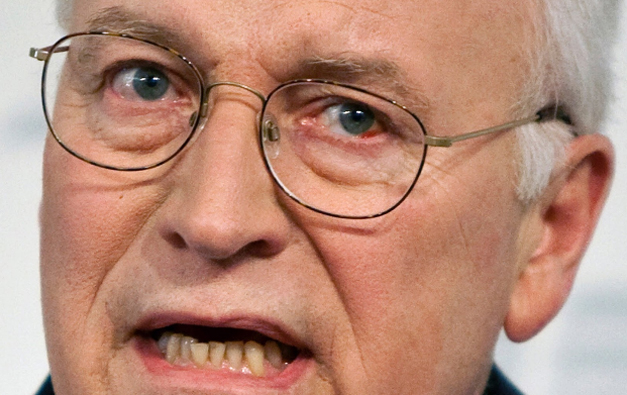 PAUL JAY, SENIOR EDITOR, TRNN: Welcome back to The Real News Network. I’m Paul Jay in Washington. And we are discussing the 46th vice president of the United States, Dick Cheney, with Larry Wilkerson, who was Colin Powell’s chief of staff and worked with Cheney in the White House—not directly; worked with Powell and worked in the same building, I guess it is. Thanks for joining us again, Larry.

LAWRENCE WILKERSON, FMR. CHIEF OF STAFF TO COLIN POWELL: Good to be here.

JAY: So talk about one of the key moments, I think, in the power dynamic within the White House. In 2003, if I understand it correctly, Iran sends a message. What is it and what happens?

WILKERSON: Well, that’s an interesting question. People don’t think Powell won very many victories. He did win quite a few. He just didn’t get the publicity for it. He won the China victory, for example, from a running together of the Chinese F-8 and the EP-3, US EP-3, in April 2001. EP-3 had to go down on Hainan Island with 24 American service members on board. Powell took over the China account and managed it for the entire four years and managed it well. Rumsfeld and Cheney were looking to have China be the new Soviet Union, to refurbish the military-industrial complex post-Soviet Union. They saw China as the new enemy.

JAY: And they were going to use the plane going down as the trigger for a new Cold War.

WILKERSON: They wanted to move off rapidly. And that was—.

JAY: “Move off” meaning what?

WILKERSON: Move off in the creation of a new enemy, new major enemy. And that was a good place to do it. And essentially Powell cut him off at the pass.

JAY: So did this have itself out in some fight, and does President Bush actually say, “Okay, Powell, you take it”?

JAY: And some of his most important allies in the corporate world are now producing in China. I mean, they would have screamed blue murder.

WILKERSON: Absolutely. And his father was, after all, one of our envoys to China, and probably if there was a country George Bush knew, it was China.

JAY: Well, this is where you get into the different economic alliances of politicians: Cheney-Rumsfeld very connected to military production and oil, less connected to that consumer products industry that’s developing in China.

WILKERSON: Absolutely. And that’s why I think Powell won that one. So he had that account. He also had in the NSC—in terms of decision-making in the National Security Council, he also had to deal with Iran, to deal with Iraq, to deal with Afghanistan. Cheney used various bureaucratic techniques to deal with each of these national security issues. He lost on China. He won on Iraq. He won on Afghanistan. He won on Iran, but he didn’t win on Iran by getting a presidential decision; he won on Iran by exploiting the dysfunctionality of Condi Rice, his national security adviser. Rumsfeld couldn’t stand her, didn’t have any respect for her, and she could not discipline the decision-making system as a result. And so he exploited that so that there never was a decision made about Iran. It was on the—I can’t tell you how many times it was on the agenda, but there never was a national security decision document issued codifying US policy towards Iran. So by default Cheney got what he wanted, which was essentially no talks with Iran. And the event you’re talking about comes about in the spring of 2003 when our protecting power in Iran, the Swiss, let Geneva, our ambassador in Geneva, know that the Iranians, all the way up to the top man, the ayatollah himself, and the Guardian Council, were interested in negotiating the points that we had previously indicated to them through our contacts in Afghanistan, when we were cooperating on the ground in Afghanistan with the Iranians. They wanted to talk about those points.

JAY: Let me just emphasize that, for some of our viewers that might not remember the history. Post-9/11, the beginning Afghan war, there’s a lot of collaboration between Iran and the United States in the American intervention in Afghanistan.

WILKERSON: We were essentially getting rid of their number two enemy. Saddam Hussein was arguably their first enemy, and the Taliban were their second enemy. And so we were essentially getting rid of them, and there was a lot of cooperation on the ground. And, as a matter of fact, the Iranians were cooperative on the Bonn Conference, in setting it up to bring Karzai in to be the president. They were helpful with Al-Qaeda—it had retreated into Iran. And so forth. So good cooperation going on. So in 2003 they come back with a paper that looks a lot like the sort of non-paper we had given them—non-paper being no fingerprints on it, no letterhead, or anything: these are the points we’d like to talk about with you if we ever get down to it. And they came back and said, well, these are the points we’d like to talk about. And there was a marvelous coincidence between the two. Bill Burns, who was the assistant secretary for Near Eastern Affairs (NEA) in the State Department, I’m told, subsequent to all of this, advised Powell that he didn’t think the offer was that solid, that it was being embellished by the Europeans, or something to that effect.

JAY: The offer came through the Swiss?

WILKERSON: It came through the Swiss to our ambassador in Geneva, and then to the State Department, and then to the NSC and the vice president’s office and so forth. It was my sense that Powell already had North Korea on his plate, and he was fighting the vice president tooth and nail over North Korea and the six-party talks and getting some negotiations, meaningful negotiations.

JAY: Why? What did Cheney want to do with North Korea?

JAY: They were ready to have intervention in North Korea?

WILKERSON: These people whom I met in the Pentagon and whom I met associated with the vice president were ready to regime-change in any way, fashion, or form because everything that was evil in the world was represented to them by Baghdad, Pyongyang, and Tehran. And it also opened marvelous other opportunities to them. It opened the opportunity to protect Israel from some of its staunchest enemies. It opened the opportunity to reunify the Korean Peninsula and put 71 million Koreans to work and let the South exploit the labor of the North, in some ways the way West Germany did East Germany when they reunified. It opened up a vista of new possibilities in the 21st century. And, frankly, I encountered person after person in the Cheney network at Defense, at State, and elsewhere who didn’t—they didn’t necessarily want war, but they were not going to back away from war if war came. And in the case of the Korean Peninsula, John Bolton personified this. When I essentially suggested to him that his policies were going to lead to war on the peninsula, he said, “I don’t do war. That’s your bailiwick.” You know, “That’s the Pentagon’s bailiwick.” So, I mean, they just did not have this kind of regard for the—all the options being on the table meant you might have to use that final option, the military.

JAY: The offer comes from—.

WILKERSON: Again, with the president’s—as far as I can tell, anyway, the president agreed with this, the president went along with this, and that’s why it manifested itself. It never got anywhere, because Cheney would constantly weigh in at the last minute. And our negotiator was Jim Kelly, assistant secretary for East Asian and Pacific, and Jim would be put in a straitjacket. He would be going to the talks, the talks would be multilateral, they’d be hosted in Beijing by the Chinese, and the North Koreans would come, but Jim Kelly would be like a mummy. He’d be in a straitjacket. He couldn’t negotiate anymore.

JAY: So it’s in the context of this [that] this offer from Iran comes. So what do the Iranians offer?

WILKERSON: In essence what I saw in the document that I read was the Iranians saying back to us, all of these issues that you have put down, from our new nuclear program through these other issues, down to and including tactical issues like do we have any Al-Qaeda, and if we do, will we turn them over to you—.

JAY: And did it include things like their relationship with Hezbollah and Hamas?

WILKERSON: Oh, absolutely. Absolutely. It was all on there—Hezbollah, Hamas, Syria, Lebanon. And I suppose that’s the reason people like Bill Burns—who, after all, knew the area a lot better than I did—and some others in NEA and elsewhere thought that this offer was too good to be true, it was being embellished by the Europeans, or maybe by the Swiss in Tehran, that this was an effort to deflect our attention while they continued to work on their [inaudible]

JAY: So is there any response to the Iranian offer? Or it dies?

WILKERSON: No, the response was none. It drew no response at all from the US government.

JAY: And this is Powell not wanting to take on Cheney one more time.

WILKERSON: I think so, and I think it’s fair to say that he lost. I mean, Cheney would have won on this one. Cheney had won previously, and he wasn’t about to lose on Iran. We were not going to talk to Iran while Cheney was vice president.

Sex Workers Are Organizing, and Voters Are With Them