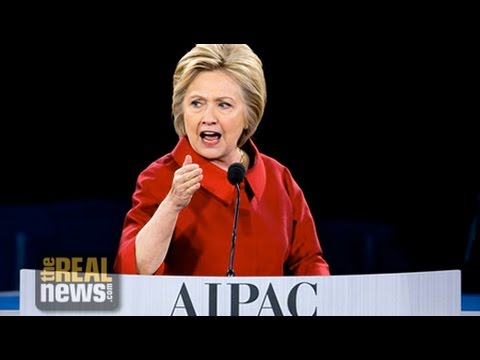 On Monday morning, Democratic presidential candidate Hillary Clinton addressed the American Israel Public Affairs Committee, also known as AIPAC. Without mentioning Donald Trump by name, she attacked his neutral stance on negotiating a settlement to the Israel-Palestine conflict. She also affirmed the U.S. and Israel’s strong military alliance, and she vowed to reestablish sanctions on Iran if provoked. Let’s take a look at what she said.

HILLARY CLINTON: That America can’t ever be neutral when it comes to Israel’s security or survival. We can’t be neutral when rockets rain down on residential neighborhoods, when civilians are stabbed in the street, when suicide bombers target the innocent. Some things aren’t negotiable. And anyone who doesn’t understand that has no business being our president.

That’s why I believe we must take our alliance to the next level. I hope a new ten-year defense memorandum of understanding is concluded as soon as possible to meet Israel’s security needs far into the future. That will also send a clear message to Israel’s enemies that the United States and Israel stand together united. It’s also why, as president, I will make a firm commitment to ensure Israel maintains its qualitative military edge.

Our next president has to be able to hold together our global coalition, and impose real consequences for even the smallest violations of this agreement. We must maintain the legal and diplomatic architecture to turn all the sanctions back on if needed. If I’m elected, the leaders of Iran will have no doubt that if we see any indication that they are violating their commitments not to seek, develop, or acquire nuclear weapons, the United States will act to stop it, and that we will do so with force if necessary. Iranian provocations like the recent ballistic missile tests also are unacceptable, and should be answered firmly and quickly, including with more sanctions.

PERIES: That’s Hillary Clinton at the AIPAC summit. And now joining us to discuss what she said is Larry Wilkerson. Larry is the former chief of staff for the U.S. Secretary of State Colin Powell, currently an adjunct professor of government at the College of William and Mary, and he’s of course a regular contributor to the Real News Network. Thank you so much for joining us again, Larry.

PERIES: So, there’s a lot there for us to unpack, Larry. Let’s start off with her comments on Iran. I know Iran has always been something that Hillary Clinton has been very concerned about, and of course that all comes out here in the AIPAC meeting. And I remember in 2008, you know, during her presidential campaign she was very hawkish when it came to Iran, and I see that those sentiments are still being maintained in spite of the negotiated agreement we now have with Iran. Your thoughts on it?

WILKERSON: Sharmini, let me say first that I wish Hillary Clinton had been at the conference on Israel’s influence on the 18th of March last Friday at the National Press Club, and heard Gideon Levy himself from Haaretz in Israel talk about the young children killed by U.S.-supplied F16, of course flown by an Israeli pilot, lying on the beach opposite Gaza. I wish she could have heard that, so she could compare and contrast what she’s talking about with regard to Israelis, who are far, far safer than the Palestinians, with regard to Palestinians. There is blood on both sides of this divide, in other words, and I wish Hillary had acknowledged some of that.

With regard to Iran, her rhetoric is understandable, perhaps. But in many respects, is one of the reasons I probably won’t be voting for Hillary. And as her warlike, hawk-like her attitude–and it’s not just because she’s at AIPAC. It’s not just because of the audience to which she’s speaking, which represents the ultimate right-wing of Israel to this state, it doesn’t represent the Israeli lobby in the United States, doesn’t represent Jewish Americans by and large. Poll after poll shows that. It represents the ultra right-wing government of Bibi Netanyahu in Israel.

And so I understand she has to say these kind of red meat things to them. But beyond that she frightens me with the relaxed attitude she has about using the U.S. armed forces and about using force in general. We saw that in Libya. She was, I think, the principal who convinced President Obama to do Libya, as it were, and now we have a colossal mess in Libya.

So she disturbs me in these kind of remarks. Not just because she’s at AIPAC, but because I believe she believes some of these things she’s saying about the use of force and how it should be predominant in our arsenal.

PERIES: And Larry, the military alliance that she’s talking about, Israel is already getting quite a bit of military support. Apparently it’s in terms of its aid to Israel is getting more aid, U.S. is giving more aid to Israel than what they provide to Africa altogether. Now, what more is she going to commit, and how concerned are you about that?

WILKERSON: Sharmini, this is a terrible place for us to be doing what we’re doing right now. And in terms of the situation in the Middle East, I mean, I’ve got to tell you, we give $3 billion-plus to Egypt every year to bribe them to keep the peace treaty with Israel. And then we turn around and give $3 billion-plus a year to Israel. And there’s hardly any money left for U.S. foreign policy on a discretionary basis because of these fixed dole-outs we give every year. And now we’re talking, if you can believe this, we’re talking about going up to $5 billion. I understand the Israelis have asked for $6 billion. They’ll compromise for $5.5 billion.

This is one of the most successful capitalist states in the Mediterranean, if not the world. They’re not poor people, and we’re giving them all this money. We’ve been giving them hundreds of–we’ve given them $200-300 billion over the last generation or so. This is incredible what we’re doing, leaving no other money for U.S. foreign policy, by and large, because we’re giving so much to these two states, really giving it directly and indirectly to Israel. And now we’re going to give more. And we have one of the most robust military-to-military and intelligence-to-intelligence relationships in the world. It’s not always served us very well. And we’re going to do more? This is preposterous. This is political talk for AIPAC, for the red meat audience of AIPAC.

PERIES: Now, her comments on Trump, Larry, it’s interesting that she likens the Trump comment about banning Muslims to the United States to U.S. banning Jews from entering the United States based on religion. But she doesn’t touch the issue of walls in her comments. I thought that might be something you want to talk about.

WILKERSON: That’s interesting, that you should bring that up. I mean, one of the places where people have the most difficult time entering is Israel from the West Bank or other places for Palestinians [they live] and work. That’s rich of her to be talking about that to an audience whose oppressive policies in Palestinian territory, the West Bank in particular, Jerusalem in particular, are apartheid policies. They are apartheid policies.

This was clearly admitted to by Gideon Levy, and his real lament was that the United States is supporting these policies, indirectly if not directly. With the money we give, money’s fungible, this money we give can go to settlements and so forth, and expansion thereof. It’s really rich that Hillary would be talking about that to an audience representing a right-wing government that is oppressive in terms of the Palestinians and entry and non-entry as any Mexican government or any other government we might want to take a look at. Really rich, that this is something she would bring up.

And she knows this. She was Secretary of State. She knows this. So again, her hypocrisy is, shall I say, understandable, given the audience she’s talking to, perhaps from a political perspective. But in many respects, lamentable.

PERIES: All right. Larry, there’s so much more to talk about when it comes to Hillary Clinton and her alliance and specific alliance with Israel–.

WILKERSON: And Sharmini, let me just say that this is–this is really going to be difficult this year for a lot of people, I know that. The people who have decided to vote for Trump are going to vote for Trump. The people who decided to vote for Hillary are going to vote for Hillary. But I really don’t think that’s going to constitute on either side anywhere close to a majority of Americans, even close to a majority of Americans who will go out and vote, which I think is going to be a low ebb, maybe less than 50 percent.

And this is really a comment on our republic right now. That we can, that no one forward from 330-plus million people, 100 million of which probably fall in the eligibility category for president, better than those candidates which we have arrayed before us now. That ought to make every single American stand up and think hard about the state of his republic. Her republic.

PERIES: Larry, also absent from Hillary Clinton’s statement was any reference to the attacks on Gaza and the thousands of people that are still hurt, and were attacked in the Israeli attacks on Gaza two years ago. None of that was ever mentioned in her speech.

WILKERSON: No, and I recommend everyone go to www.IsraelsInfluence.org, and listen to one of the most eloquent speeches I’ve heard from an Israeli in a long time, Gideon Levy, as I said, from Haaretz, and listen to his eloquent plea for those people.

PERIES: And we also have that speech on the Real News Network, so do stay tuned, as well as we have Max Blumenthal in an interview with Gideon Levy all available for you. Thank you so much for those references, Larry, and good to have you with us.

WILKERSON: Thanks for having me, Sharmini. Good day to you.