Did Kerry Open the Door to Negotiating with Assad?

Larry Wilkerson says Assad is not going anywhere, and the US is late in recognizing that reality

Larry Wilkerson says Assad is not going anywhere, and the US is late in recognizing that reality 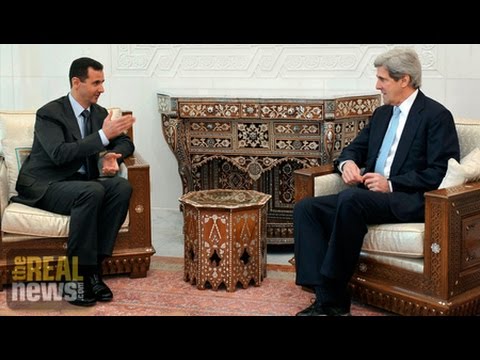 It is almost five years since the civil war began in Syria. On Sunday, Secretary of State John Kerry stated that President Assad should be included in any negotiations to facilitate a political transition in Syria.

Let’s have a look at what he had to say.

JOHN KERRY, U.S. SECRETARY OF STATE: We are working very hard with other interested parties to see if we can reignite a diplomatic outcome. Why? Because everybody agrees there is no military solution. There is only a political solution.

But to get the Assad regime to negotiate, we’re going to have to make it clear to him that there is a determination by everybody to seek that political outcome and change his calculation about negotiating. That’s underway right now. And I am convinced that with the efforts of our allies and others, there will be increased pressure on Assad.

JOURNALIST: And you’d be willing to negotiate with him?

KERRY: Well, we have to negotiate.

PERIES: After leaving a meeting with the Iranian delegation to Damascus, President Assad was asked about Kerry’s statement. President Assad replied, the Syrian people will decide what political transition takes place in Syria.

Now joining us to discuss all of this and the significance of these two statements is Larry Wilkerson. Larry is a former chief of staff for the U.S. Secretary of State Colin Powell and currently an adjunct professor of government at the College of William & Mary and a regular contributor to The Real News Network.

As always, thanks for joining us, Larry.

COL. LAWRENCE WILKERSON, FMR. CHIEF OF STAFF TO COLIN POWELL: Thanks for having me, Sharmini.

PERIES: Now, Larry, this is an opening step forward. The U.S. until now has maintained the position of regime change in Syria. What brought about this shift?

WILKERSON: A recognition of reality, as far as I’m concerned. President Obama made a mistake when the Syrian Civil War commenced, probably advised by Samantha Power and Susan Rice, that it was a similar episode to what had happened in Egypt, templating Egypt onto Syria. Of course, it wasn’t. This is a common mistake by the United States, thinking that all Arab countries are the same, or for that matter, all other countries, period, are the same. They are not. In this case they are decidedly not. Basher al-Assad has significant power sources in Syria. He wasn’t going anywhere other than dying of whatever causes. I don’t think he’s going to go anywhere for the near future. So the United States is coming late to this recognition of reality that Bashar al-Assad is the elected, if you will, leader of Syria and he is going to stay in that position, and we need to deal with it.

PERIES: Now, clearly the Iranian delegation to Damascus to speak with President Assad signifies that they’re in conversation. Is this being communicated obviously to Washington in some way to have Secretary of State Kerry take a shift in his position?

WILKERSON: I hope we’ve been having conversations with Assad’s people on the side, so to speak. For some time now–and I hope that this retort by Assad, which basically is correct–I mean, I would say nothing less than he said, the Syrian people will determine who’s going to be their leader. No matter how apocryphal that might be with Assad, that is the way it should be. The majority of the Syrian people should determine who their leader’s going to be.

I would hope that we’ve been having some kinds of conversations with his people so that we are working out, and not just starting with Kerry’s statement, some modus vivendi with him and with a political transition that might take place that would be acceptable to all concerned, not least of which, of course, is Ankara, who seem to want to see the back of Bashar al-Assad more so than anyone else in the region.

PERIES: And, Larry, one of the U.S. strategies to fight the IS has been to support the so-called moderate rebel groups in the area. Is this an indication that that strategy is no longer working, because we’re actually seeing on the ground that some of such rebel groups are dissolving, for example the Hazzm group?

WILKERSON: I think that has been reality for some time. I don’t think there’s any so-called moderate group in Syria that looks like Jeffersonian Democrats, or even a reasonable facsimile thereof. And therefore you’ve got to deal with what’s real. You’ve got to treat the factions for what they are.

The most powerful entity in Syria right now, despite his (in places) beleaguered status, is Bashar al-Assad and the Syrian military, aided and abetted to a certain extent by the Iranians and by Hezbollah. But they are the most powerful element in Syria, and no one is going to defeat them any time soon. So if you want to bring about a solution in Syria, a political solution–and that’s the only kind that’s going to work–you need to bring the regional players in and you need to deal with the power structure as it is in Syria. As I said before, the most difficult regional player in this is probably going to be NATO ally Turkey.

PERIES: And finally, Larry, what is at stake here in terms of Iran and Syria is concerned in fighting back the IS?

WILKERSON: I think what we’re seeing here–and I know what my opponents are saying, neoconservatives. And while I would discount almost anything they were saying because of their track record, which has been patently bad for the past 20 years–but if let’s say for a moment their argument is holding up some water, and that is that Iran is devouring all the capitals in the region from Sana’a in Yemen to Baghdad in Iraq–I think that’s preposterous, but that’s their argument–then they have to be doing that for a reason. The reason they’re doing that is because they are the natural hedemon in the Gulf militarily, geographically, demographically–you name an element of power. And even talk about stability and a modicum of democracy and Iran looks at the top of the list in the region.

So they are doing the sorts of things they’re doing and being relatively effective in doing them because they have the power to do them. We should recognize that. We’ve been doing that for about a half century plus.

So we’ve got to come to some accommodation with this country if we’re going to stabilize the region and give the people in the region some reasonable future and an expectation of stability and prosperity. We’ve got to do that, especially for the vast number of the population who are beneath the age of 35. There’s no other solution. And Iran is intrinsic to that solution.

PERIES: And obviously, by extension, Iranian allies in the region, such as Assad in Syria.

PERIES: Well, Larry, thank you for joining us today. I appreciate your comments and your take a what’s going on there.

WILKERSON: Thanks for having me, Sharmini.