How Trump Could Widen Divisions Within the Republican Party

Other countries might begin to see opportunities to take advantage of the Trump administration due to its glaring inexperience, says Col. Larry Wilkerson

Other countries might begin to see opportunities to take advantage of the Trump administration due to its glaring inexperience, says Col. Larry Wilkerson 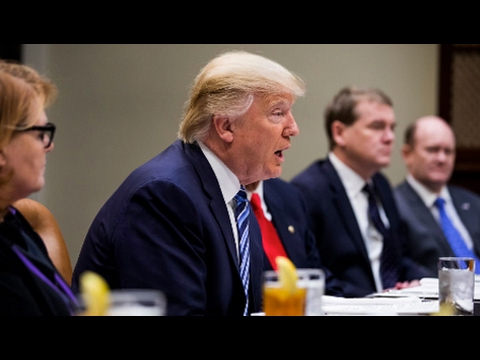 Today we’re joined by Larry Wilkerson, he’s the former Chief of Staff to U.S. Secretary of State, Colin Powell; currently an adjunct professor of government at the College of William and Mary, and of course, a regular contributor to The Real News. Thanks so much for joining us again, Larry.

LARRY WILKERSON: Thanks for having me, Jaisal.

JAISAL NOOR: So, Larry, you have a talk coming up and the topic is, “What might happen to the U.S. and the world, now that King Trump is in charge?” In fact, it’s going to be a major address in just a few days. Talk about what’s on your mind, and give us a preview of what that address is going to be.

LARRY WILKERSON: Iowa State University asked me to come up this week and speak on … Global Security. And when I was working on the remarks this weekend, I realized I couldn’t possibly talk about that subject, without first and foremost referring to the current occupant of the White House, and what he might mean for global security.

So, I coined the phrase, “HMS Trump,” His Majesty’s Ship Trump, primarily because this is the closest we’ve come to monarchial rule since 1787. Mr. Trump is closer to George the Third, than he is to say, George Bush the Second, or even Andrew Jackson the First, the so-called first populace president.

So, I began to look at it, and I had to look at it through the lens of the most important, strategic portfolio the U.S. has, and that’s the U.S.-China relationship. And when I did that, I found a very disturbing picture. Mr. Trump has gone from saying things like, “Taiwan, and so forth should have a different relationship. The one China policy should be reviewed.” And actually setting up phone calls and visits that were, if not unprecedented, certainly gave the wrong sign to Beijing about our U.S.-China policy.

And now, to an almost abject back down in the face of that kind of, in your face policy, by saying essentially, he didn’t mean any of that. We’re advocates of the one China policy, etc., etc. If I’m reading the media right, about the different moves he’s made. Those are not very smart moves. The first was not a smart move. But then compounding the, shall we say, stupidity of that move, by backing out completely without gaining any negotiating ground from having the first position, is just as stupid.

And I’m very worried about what that indicates essentially, about the most inexperienced administration since World War II. I think it means that we’ve got some real problems. We’ve got a national security advisor, for example, who is totally inexperienced at this level of power management. And who seems to be demonstrating that on an almost daily basis.

So, in terms of redefining global security, I don’t know quite how to do it, vis-a-vis Mr. Trump, HMS Trump. But I do know that it’s very concerning, very worrisome, and looks to be problematic to the maximum. And that’s probably worrying our friends and allies, and making our enemies, if not afraid from time to time, which might be his intent.

More to the point, probably making them laugh at us, and wonder when the opportunities are going to arise, to take advantage of this inexperience.

JAISAL NOOR: And on that issue of the U.S. role in the world, you know, there’s been talk of Trump approving a new massive arms deal to Saudi Arabia and Bahrain, something to the tune of 100’s of millions of dollars. And there’s been a lot made of the botched raid in Yemen against Al Qaeda there, along with Trump’s Muslim ban, which was rebuked by the courts just last week. And Steven Miller, one of his top advisors says, you know, “Trump’s national security actions will not be questioned by the courts.” What is your response to that?

LARRY WILKERSON: Well, first of all, giving more arms and more military aid to a country that beheads with axes, 5,000 people plus a year, and has started one of the bloodiest, mostly civilian casualties being incurred wars in the region’s history, in Yemen — is just absurd. It doesn’t make any sense at all, and then to go to your third point, the U.S. getting involved in that conflict as the raids seem to suggest we are contemplating, if not already doing, is even more absurd.

This is a conflict that taught Egypt, for example, when it intervened some years ago, the same thing Vietnam, I hope, taught the United States. In fact, Egypt’s incursion into Yemen is referred to within the Egyptian military, as Egypt’s Vietnam. This is not a place we should be getting buried. It is not a place we should be taking military action at all, even pinpoint strikes on the ground against Al Qaeda.

And as far as the Muslim ban goes, and the Article III courts, Mr. Trump’s administration is going to learn something. This is the most monarchial administration since George the Third, and they’re going to learn something. This isn’t George the Third’s colony, this is our Republic, and the courts are essential to the well functioning of that Republic. And the courts can certainly stand up to the President of the United States, often have indeed, and tell him that he can’t do this, or he can’t do that.

And any objection to that, vouched safe by a stooge of the President, or by the President himself, borders on tyranny. And I think the American people will have something to say about that.

JAISAL NOOR: And so, I wanted to lastly end on a question about the resistance to Trump, because we know since Trump’s first day of office, millions of people took to the streets. The Democrats have not had much success blocking much of his policies so far. It seems like the real resistance is in the streets, you know, thousands of people have taken to the streets against the Muslim ban, and other policies him and the Republicans have put forth.

How would you evaluate the role that the Democrats have played in trying to be a spoiler to Trump? Do you think they’re making the right move to set themselves up in two years and in four years, to take back some of the levers of power, and move the protest beyond the streets and actually into policy?

LARRY WILKERSON: I certainly hope the Democrats will get their act together. They’ve got something like 30 plus, maybe 33 Senate seats, for example that are vulnerable in 2018. The Republicans only have seven or eight. Just by that math alone, it looks to me as though the Republicans, if they don’t really step all over themselves, are going to gain an even bigger majority in the Senate and retain the majority in the House.

Of course, Mr. Trump could do enormous damage to that potentiality, by being more of what he’s been so far, inconsistent, dangerous, inexperienced, and so forth, and the American people could awaken to that, and vote a lot of those Republicans out. But right now, your insinuation is that the Republican Party has unanimity in the Legislature.

One case in point is the elimination of Obamacare, or the Affordable Healthcare Act. In the recent hearing, Senator McCain from Virginia, for example, asked four witnesses, two of which were very much for abolishing the Affordable Care Act. The other two were somewhere in between. And he simply asked them a question, “Would it be catastrophic for millions of Americans, if it were abolished overnight?” “Yes,” they said, after some consternation. “Would it be the case that the Republicans have a plan to immediately put in its place?” “No.”

So, you know, you’re not going to get any unanimity out of this Republican Party. You’re not even going to get it over the defense budget. You’ve got people like Lindsay Graham and John McCain, who’ll be right there with Trump trying to dump more, good taxpayer money down the rotten hole that is national security. And then you’re going to have people who are not going to be so for that, because they’re budget hawks. I would put the Speaker of the House, Paul Ryan, in that category ultimately. They’re not going to want to increase our deficit, increase our debt.

So, this is not going to be an easy road for Mr. Trump, with regard to the Legislature. And I predict that in that regard, he’ll either get tired of it, or he’ll become even more tyrannical and we’ll see him saying things about the Congress that he’s now saying about the Article III Courts.

JAISAL NOOR: All right, Larry, thank you so much for joining us again.

JAISAL NOOR: And we look forward to having you on again. Thank you so much for joining us.