Col. Larry Wilkerson says he's amused by Trump's understanding of foreign policy, but Trump still understands those issues better than other Republican candidates despite his "idiotic pronouncements" on other matters.

Col. Larry Wilkerson says he's amused by Trump's understanding of foreign policy, but Trump still understands those issues better than other Republican candidates despite his "idiotic pronouncements" on other matters. 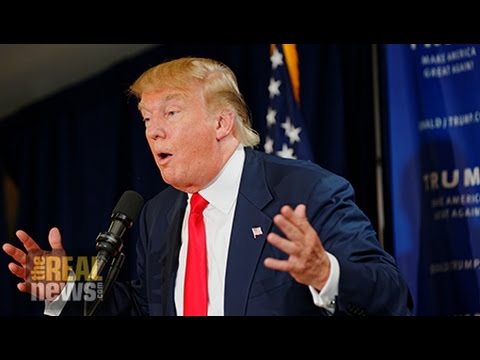 Donald Trump has been making headlines for his outrageous statements on immigration, healthcare, and gun control, among other domestic issues. Despite all of this, he opposed the U.S. invasion of Iraq, forseeing the destabilization of the Middle East, according to him. With the current situation in the Middle East, Trump says that he is not opposed to Russia playing a role in fighting ISIS, and is taking a more reasonable position on Assad.

Joining us now to further discuss all of this is Larry Wilkerson. He’s the former chief of staff for the U.S. Secretary of State Colin Powell, and currently an adjunct professor for government at the College of William and Mary. Thank you so much for joining us, Larry.

PERIES: So Larry, first of all, this is a bit odd, given Trump’s other positions on things. Why is Trump having what I would consider more reasonable policy when it comes to the Middle East?

WILKERSON: If he’s being practical, he’s shaping himself up and his positions along with it for the general election, if there’s any possibility that he might be there and be the Republican candidate.

He has gone all over the map. I mean, in 1999, for example, I remember him saying he was a big supporter of the embargo on Cuba. He even said he made a decision between human rights and making big money in Cuba, and he came down on the side of human rights. Now he’s saying the policy’s not all that bad, that the deal was bad, but the policy’s not all that bad. Closer relationship with Cuba. Well, [inaud.] deal. It was just a fact that we finally did what we should have done for about 20 years. We recognized that Cuba was not the country it was during the Cold War, and that we need to have closer relations.

And then there’s more serious issues, like where he said things about ISIS and Syria that I would disagree with, and on the other hand he’s said things that I would agree with. And his position that now, his position now that the Iraq war was a disaster, 2003 war, is absolutely spot-on. It unleashed the forces that we’re having to deal with in southwest Asia, the Middle East, today. So one doesn’t know where Trump stands, as you sort of pointed out with your question.

PERIES: Now, of course, he’s a worldly businessman. He travels, he has dealings in Russia, and I understand even reaching out to corners of the world that normally our candidates don’t. Do you think that has something to do with his openmindedness when it comes to dealing with international issues?

WILKERSON: I like to think with regard to Russia in particular that it’s not just his openmindedness, which I hope is there, but I–or his business interests, which I know are there. But it’s the strategic reality of the situation. First of all, we created the animosity that Russia now shows in Georgia, Ukraine, and elsewhere, by expanding NATO well beyond what we should have. And second, we have to understand that Russia is a power and has interest as a power. And those interests are often colliding with our own, and in most cases where they do collide they collide because we made the mistake and not Russia.

And then there’s a third reason, too, and that is as important as the first two in acknowledgement. We need Russia. And to a certain extent, Moscow needs us. We can’t deal with the challenges we’ve got in southwest Asia, whether it be Syria or Iraq or Afghanistan, or something else that might pop up tomorrow morning with rather sudden instant surprise. But we shouldn’t be. Or whether it’s dealing with the incredible challenge we’ve got with regard to planetary climate change. We need Russia, and we need Beijing and Berlin and Tokyo. We shouldn’t be alienating anyone with bad policy and bad diplomacy and bad actions, but we seem to be inclined to do that with Russia.

PERIES: Now, Larry, do you think some of this positioning is coming because he’s a businessman? And–or do you think his advisors are just telling him this is a better line to take? Or do you think he really understands the issues he’s dealing with?

WILKERSON: I think it’s both. And you really put three out there. I think it’s also that he understands some of these issues. And I’ve got to contrast that with some of the other people with whom he’s running, or running against. A lot of them don’t understand the issues, and are acting strictly in a political, opportunistic way, or in a way that they think their counselors and advisors or the polls or both instruct them to act.

So in that regard, while I have some real problems with some of Trump’s idiotic pronouncements on immigration, on the Mexican border, and so forth and so on, I do think that from time to time he speaks as if he understands the issues better than most of the other candidates. And that includes some of the candidates that are supposed to be so rational and critical thinking, like John Kasich and Chris Christie. I don’t see them as understanding issues even as well as when he does say he understands them and postulates accordingly, Trump does.

PERIES: And Larry, finally, if we were to deal with a Trump candidacy seriously, and perhaps leading to the White House, how do you think he will deal with ISIS?

WILKERSON: I think he’ll probably deal with ISIS pretty much the same way President Obama is dealing with it, to tell you the truth. I don’t think the United States has any business putting troops on the ground in any significant numbers in Syria. That’s the first thing for U.S. national interests. The second thing is the countries in the area need to do the heavy lifting here. I pointed out many times there are almost 4.5 million troops in the countries in the region. And 4.5 million troops can’t handle 25,000-35,000 ISIS fighters? Come on, give me a break. Something’s wrong with the math there. Something’s wrong with the politics there.

And you’ve got to give Saudi Arabia and others of Saudi ilk from funding people and arming people and so forth. You’ve got to get Erdogan in Turkey to stop doing what he’s doing, which is essentially giving free passage to ISIS fighters, and so forth. This is a very complex problem, but it isn’t going to be helped at all. In fact, it’s going to be exacerbated by U.S. troops on the ground fighting in Syria. So as long as Donald Trump realizes that, with that particular issue I have no argument with him.

PERIES: All right, Larry, thank you so much for joining us today.