Wilkerson: Why Hagel is a Good Choice

Col. Lawrence Wilkerson: Hagel's nomination for Sec. of Defense is opposed by those who believe that American military power should be used almost as the sole instrument of American policy

Col. Lawrence Wilkerson: Hagel's nomination for Sec. of Defense is opposed by those who believe that American military power should be used almost as the sole instrument of American policy 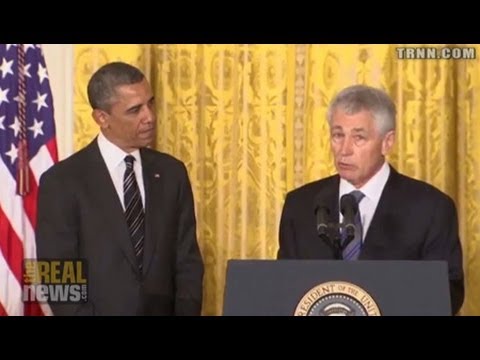 PAUL JAY, SENIOR EDITOR, TRNN: Welcome to The Real News Network. I’m Paul Jay in Baltimore. And welcome to this week’s edition of The Wilkerson Report with Colonel Lawrence Wilkerson.

Larry Wilkerson was the former chief of staff for U.S. Secretary of State Colin Powell. He’s currently an adjunct professor of government at the College of William & Mary and a regular contributor to The Real News. Thanks for joining us.

JAY: So I’ve been wanting to ask you about this for a couple of weeks now. What do you make of President Obama’s nomination of Chuck Hagel as secretary of defense?

WILKERSON: I think the president has made a pretty astute move putting John Kerry in the State Department and, hopefully, Chuck Hagel in the Department of Defense. He’s covered his bases, so to speak, with national security issues with Chuck Hagel’s appointment, and he’s done the same thing with John Kerry at State. Both have almost unimpeachable credentials with regard to national security policy, and so I think it’s a good move on both counts.

JAY: Now, he had to know that this was going to infuriate, first of all, one gentleman named Netanyahu, AIPAC and such, and the whole neocon constituency, ’cause, I mean, Chuck Hagel became a very strong critic of the Iraq War, and he’s been very unwilling to jump on board sort of hysteria about Iran, and they don’t like that.

WILKERSON: That’s true. I like it a great deal, and I think 60 to 70 percent of Americans will appreciate it also, because that group of Americans, who constitute the bulk of Americans, of course, are not interested in another war in the Middle East, a war which would probably be catastrophic, as former secretary of defense Robert Gates called it.

And so I think President Obama has made a move that is in line with his electoral mandate. After all, he won for another four years. And he’s selecting people whose views more or less reflect the views of a majority of Americans.

JAY: But why are they so antagonistic to Hagel? I mean, he is a Republican. He caucused with them. They know him well. But they’re really pulling out their guns.

I don’t know, Paul, but you may have checked the Republican Party lately. It’s got a lot of crazy people in it. It’s got a lot of extremists in it. That’s why they lost the election. That’s why they’ll lose the next election if they don’t correct their problems. So I’m wonderful with this idea that we’ve got some Republicans who [are] moderate in their outlook and who are nonetheless going to be in positions of power.

JAY: Now, I mean, the group that seems to really be opposing it is sort of not the kind of Tea Party types; it’s the old-guard neocon foreign policy guys, you know, Lindsey Graham and his gang of people, I guess the old Bush gang Karl Rove type people. What is it about Hagel? What has he done specifically that they’re so worried about?

WILKERSON: It’s the John Boltons, it’s the Douglas Feiths, it’s the Elliott Cohens, its others who believe that American military power should be used almost as the sole instrument of American policy. And they’re irritated because Chuck Hagel doesn’t believe that way. They’re irritated because in the past Hagel has shown that he has a very balanced view towards the Israeli-Palestinian issue, that he knows all the guilt isn’t on the Palestinian and Arab side, that some of it’s on the Israeli side.

He’s very balanced on the Iran issue. That is to say, he believes diplomacy should run its full course before any option looking like military force is turned to. [snip] also a person who understands, I think, that we are frittering away our military power on the fringes of our empire, and that that’s the way empires in the past have gone the route of the dodo. And he doesn’t want the American enterprise to go that way. So he’s very concerned about our getting our economic house in order, the ultimate bastion/foundation of our power in the world in general, and very [inaud.] in getting our foreign policy issues straight so that we don’t further diminish the ability of our domestic scene to correct itself.

We’ve got a lot of work to do in this country, rebuilding infrastructure, addressing climate change, coming up with alternative energy sources, and leading the world, more or less, in this effort, so at the same time we restore our economic power while we’re leading the world in a way that will be sustainable to the end of this century.

These are huge challenges confronting us. And only now do I see, you know, these brief inklings of recognition of some of these challenges beginning to blossom in the White House, maybe even in that Luddite group of congressmen, many of whom deny that global warming and climate change is even changing.

So the challenges that are confronting us are huge, and we don’t need people who are so focused on what the neocons are focused on in positions of power. And I’m delighted to see people who have a wider vista and a more moderate approach to foreign and security policy in ministerial positions. It’sâ€”this is a great change.

JAY: Now, you once gave a speechâ€”I think it was at the Samuel Adams awards that we taped that year, and you said that there’s kind of two roads here for people in positions of power who look at the current American empire. You said that there’s a fact here, which is the empire is going to come to an end over the next few decades, but sooner than later, and it can either manage that, where United States becomes a kind of aâ€”more of a coequal player in the global scene, or you can manage it in a way that you kind of strike out and make, you know, every attempt to defend something that can’t be defended, and that gets very dangerous. What does Hagel’s appointment tell you, not so much about him, but even more about President Obama in that context?

WILKERSON: I hope it tells me that he’s beginning to show he recognizes some of these long-term and far more serious challenges, for example, than Iran. Whether Iran has a nuclear weapon or not, it pales in significance when confronted with some of these other challenges.

[snip] no question about it. There are going to be 3 billion people, many of them in India and China, who are going to come into the middle class and are going to want the standard of living that that connotes.

What we’re talking about is six to nine planets’ worth of resources just to satisfy those desires. We don’t have those six to nine planets’ worth of resources. So we’d best get busy building the kind of sustainable, the kind of regenerative agriculture, for example, that goes along with that sustainability, and building the kind of infrastructure, technologically and otherwise, that can accommodate this new, massive entry into the middle class, or we’re going to have by 2050 nothing but war and anarchy and chaos and, I’m sorry to say, probably a whole lot of death.

JAY: So when you assess these personalitiesâ€”President Obama, Hagel, Kerryâ€”the question comes up about how much they can, even if they do believe in a more rational foreign policyâ€”. And I take your point: I think at least the appointment of Hagel says something about Obama vis-Ã -vis Iran, that he’s not wanting to jump on the go to war with Iran bandwagon.

But if you look at Kerry, I mean, Kerry began as this critic of Vietnam, but seems to come, like, full circleâ€”or half a circle, maybe not full circle, ’cause he’s not back to being the criticâ€”I mean, this is the guy that said, even if he knew there were no weapons of mass destruction in Iraq, he’d still vote for supporting it. But he’s even going further than some of the Republicans and others that voted at the time.

WILKERSON: I think it’s mostly an effort to shore up what (at least until, maybe one can say, the killing of bin Laden) had been very, very weak foundation for the Democrats on national security. I know for someone who knows about Harry Truman, FDR, and all that they represented in those times, that seems nonsensical, but let’s face it. Since George McGovern and his run for the presidency inâ€”what was it?â€”1968, I guess, the Democrats have really had problems bolstering their national security bona fides. They’ve had a tremendous problem competing with the Republicans in the realm of national security.

I hope it doesn’t represent a change in his basic outlook, because the basic outlook is that military force should be the last, the absolute last resort after you have exhausted political, economic, financial, diplomatic, informational, cultural, and all other aspects of national power. Military power should only be the last resort.

JAY: Alright. Thanks for joining us, Larry.

WILKERSON: Thanks for having me, Paul.