Laurel Swerdlow of Planned Parenthood Advocates of Oregon says that though the state had no restrictions on abortion access, "a right without access is no right at all"

Laurel Swerdlow of Planned Parenthood Advocates of Oregon says that though the state had no restrictions on abortion access, "a right without access is no right at all" 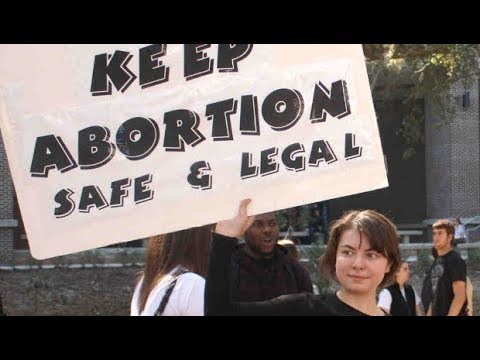 DHARNA NOOR: Welcome to The Real News Network. I’m Dharna Noor, joining you from Baltimore. Across the country, reproductive rights are coming under attack. Just this last week, the governor of South Carolina, Henry McMaster, signed an executive order stopping all state or local funding in any form to doctors who provide abortions or groups associated with abortion services. This past April, President Trump signed a national executive order allowing states to deny some federal funding to groups that provide abortions.

Some states are actually moving in the opposite direction. Earlier this month, Oregon governor Kate Brown signed the Reproductive Health Equity Act. The bill requires insurers to provide reproductive services, including abortion, for free with no copays. Here to talk more about this is Laurel Swerdlow. She’s the advocacy director of Planned Parenthood Advocates of Oregon, and she’s joining us today from Portland. Thanks for being with us today Laurel.

LAUREL SWERDLOW: Thanks so much for having me.

DHARNA NOOR: First of all, congratulations are in order. Your organization, Planned Parenthood in Oregon, the Planned Parenthood chapter in Oregon, is part of the coalition that helped write this bill. Some are actually calling it the most progressive piece of reproductive health policy in the entire country, especially because it designates some state funds to provide reproductive health care to undocumented folks who don’t have access to Medicaid, so congratulations.

LAUREL SWERDLOW: Thank you so much. We’re very excited that Governor Brown showed the leadership to sign this important bill into law.

DHARNA NOOR: While some, especially Republicans, have said that they don’t know why this bill was actually necessary. Here’s Republican State Representative Mike Nearman during the House debate on the bill.

MIKE NEARMAN: We don’t need to do this. This is Oregon. There’s no legal restrictions on anyone’s right to get an abortion. None.

DHARNA NOOR: Why was this legislative action necessary in a state where there’s been no restrictions on abortion access?

That’s why the Pro-Choice Coalition of Oregon worked with the state legislature of Oregon to introduce the Reproductive Health Equity Act, which ensures that Oregonians regardless of income, citizenship status, gender identity, have access to the full spectrum of reproductive health services that they need because ultimately a right without access is no right at all.

DHARNA NOOR: So talk more about how exactly this bill provides free abortions. Where is the funding for these abortions coming from, and what other kinds of reproductive rights and healthcare does this provide?

LAUREL SWERDLOW: Yeah. So actually here in Oregon, we’re lucky to already have a law on the books that does enable access to abortion services. What this bill does is it requires coverage for abortion at no cost to the consumer. The Reproductive Health Equity Act codifies in Oregon statute the right to abortion, so that if Roe v. Wade is overturned, we will have that right here in Oregon. It additionally requires insurance companies to cover the full spectrum of reproductive health services including abortion, which does, as I said, continue Oregon’s long standing tradition of treating abortion on par with the full spectrum of reproductive health services.

DHARNA NOOR: Some, especially in Oregon, are saying that Oregonian taxpayers shouldn’t be required to put their money into reproductive rights, especially because though Oregon’s a blue state, it has some distinctly conservative pockets. First of all, did those conservative pockets make it difficult to drum up support for such a bill, and also what’s your response to those Republicans and other conservatives who are saying that they don’t want their tax dollars to go to abortions or reproductive health?

LAUREL SWERDLOW: Oregon has actually been paying for abortion services for decades now. We are lucky to be one of the few states that does support a woman’s right to choose, regardless of their income. Oregon voters have settled that a handful of times at the ballot and made it clear that this is actually something that they want to ensure access to. Like I said, several times over the last decades.

As far as opposition that we encountered, we continue to see through polling that a solid seven out of ten Oregonians really support a woman’s right to choose, and so in fact, the support of Oregonians was really on our side for this bill throughout.

DHARNA NOOR: Nationally, too, abortion is emerging as a divisive issue, particularly within the Democratic Party. Last month in an interview with The Hill, the chairman of the Democrat Congressional Campaign Committee, Ben Ray Lujan, said that when considering, which candidates should receive funding, there would be no “litmus test” on opinions on abortion access. Some other Dems are agreeing that being pro-life should not be a deal breaker. What’s your response to all this?

LAUREL SWERDLOW: You know, Planned Parenthood is a non-partisan organization, and we believe that all politicians, regardless of their political affiliation, should stay out of decisions that must be left between a woman and her healthcare provider.

Fundamentally, Planned Parenthood believes that an individual has an absolute right to their personal beliefs on abortion, but what we care about is that politicians, again, regardless of their political affiliation, continue to represent the people that they serve. As I said, seven out of ten Americans believes that Roe v. Wade should remain the law of the land. All politicians should be serving the people that they represent. They need to make sure that when it comes to how they’re voting, they’re voting to ensure access to reproductive healthcare.

DHARNA NOOR: So turning back to Oregon, is this bill bulletproof? I know that you said that it would protect from any overturning of Roe v. Wade, but is there anything that the federal government could do to attack it?

LAUREL SWERDLOW: Ultimately the future at the federal level is really unknown. All we want to make sure that we’re doing here in Oregon is taking every step possible to safeguard access to reproductive healthcare. It’s hard to say what the future holds at the federal government but what we know here in Oregon is that we want to be taking every precaution possible to be ensuring access to reproductive healthcare and that’s what this bill does.

DHARNA NOOR: Finally, Laurel, what will reproductive rights activism look like in Oregon now? Is the fight for reproductive justice over now that you’ve had this massive win?

LAUREL SWERDLOW: You know, that’s a great question. The fight for reproductive justice is far from over. This bill takes huge strides in securing access to reproductive healthcare for Oregonians, but unfortunately there are still areas that we need to expand. Pro-choice advocates in Oregon stand alongside advocates throughout the country that oppose the Hyde Amendment, which prohibits federal dollars from going towards abortion services. We join that coalition throughout the country, that continues to say that an access to reproductive health, that access to reproductive health services should not be determined by how much money you make, by your citizenship status, by the type of insurance. While this bill does take large strides forward, there’s definitely still work to be done.

DHARNA NOOR: All right, Laurel. As that work continues, we’ll be sure to talk to you again. Thanks so much for coming on today.

LAUREL SWERDLOW: Thanks so much for having me.

DHARNA NOOR: Thank you for joining us on The Real News Network.

Laurel Swerdlow currently serves as Advocacy Director of Planned Parenthood Advocates of Oregon. She first joined Planned Parenthood in 2011 as a Medical Assistant in San Diego. She went on to complete a master’s degree in Public Health from Columbia University, and has collaborated with women’s and LGBTQ health coalitions in California, New York, Washington…