How Seattle Uber Drivers Won the Right to Unionize 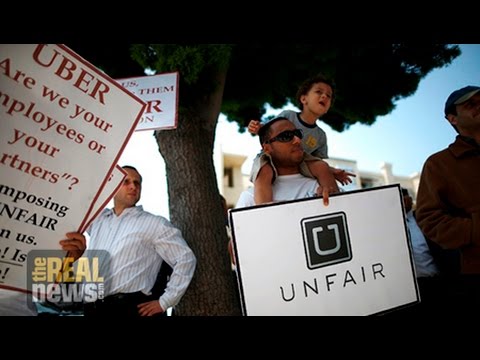 On Monday the Seattle City Council was the first U.S. city to vote unanimously to allow Uber and Lyft drivers to form unions. The App-Based Drivers Association or ABDA, worked with the local Teamsters union to fight for the legislation, will allow drivers to negotiate with Uber and Lyft for higher wages. Uber Technologies has butt heads with their drivers in the past for slashing fares at their own discretion and for discouraging union organizing.

Joining us to discuss all of this is Leonard Smith. He is the director of organizing and strategic campaigns for Teamsters Local 117 in Seattle, Washington, and he helped get this bill passed. Thank you so much for joining us, Leonard.

LEONARD SMITH: Happy to be here.

DESVARIEUX: So Leonard, I’d like to start off by asking you how you were able to get this bill passed and get drivers, specifically independent contractors, really organized. A lot of them are part time, so how did you manage to garner support for them?

SMITH: Well, they came to us. There’s a feeling–they have very strong experience with the transportation network companies, or TNCs. And let me just clarify that the bill that was passed also allows taxi drivers to collectively bargain, as well. It’s not just Uber and Lyft, it’s also taxis. And the app-based drivers came together because Uber changes the terms and conditions of their relationships at will. Cutting fares, raising costs, deactivation. And they felt powerless, and wanted to have a voice. And while they are called independent contractors their relationship with Uber and Lyft is anything but that. They’re pretty tightly controlled by those companies and how they conduct their business.

DESVARIEUX: Can you be more specific? How are they controlled?

SMITH: Well, Uber and Lyft pretty much tell them how much they’re going to be allowed to charge. They tell them their conditions of employment. They incentivize them to be in certain locations. They deactivate them, which is firing them, for no reason and there’s no recourse. And so if you’re an independent contractor–you know, Uber doesn’t allow them to take tips. And so it seems to me if you’re an independent contractor and running your own business you should be free to work where you want and take tips if you want them, and, and if the technology is going to deactivate you you should at least be able to talk to somebody to find out why you’ve been deactivated.

Normally if a driver gets deactivated and they try to hunt down the reason why, they get canned responses coming from Uber. And in fact, I just read an article the other day that led me to believe that the people that send out those canned responses are also subcontracted out from Uber, but I’m not sure about that part.

DESVARIEUX: Okay. Let’s talk more about how Uber’s really kind of captured a lot of enthusiasm in, in the mass media, everyday people. I mean, I’ll be perfectly honest, I have Uber on my phone as well. It’s, it’s really part of the sharing economy. A lot of people see this as a great way to add more competition into the marketplace, and they say it gives people an opportunity to make some money on the side, especially if you’re low-income but you need some work. You know, unemployment is rather high in this [company]. What do you say to those people that see this bill as potentially being detrimental to Uber because essentially some of the costs, higher wages for example, would eventually get trickled down and customers would have to be paying the difference?

SMITH: Well, this, this bill and these associations are not anti-Uber in any sense of the word. Uber has a great platform, great technology. What this bill does is it gives drivers the flexibility to be able to go ahead and get control over their working lives, and have a say in their hours and how much they get paid.

And you know, the cost being passed on, Uber used to cost a lot more money until they started to keep slashing and slashing and slashing. And even when they, here in Seattle when they were charging a dollar or more per mile, and they’ve cut that since, since then. But even when they were charging that higher rate, they were still equally popular. And the drivers tell, the drivers tell stories about how their customers are happy with the service. They like the service. And they’re happy to pay more. They wouldn’t have a problem paying more.

So the drivers themselves see the need, because drivers frankly can’t operate. And Seattle has the second-highest mileage rate in the country. It’s my, it’s my understanding. And the drivers really have difficulty making ends meet. The way Uber works, the way Uber and Lyft work, and to call it sharing is, is a little bit difficult. The way they work is Uber provides a technology, and the driver takes all the risk in terms of buying the car, paying maintenance, gas, tires, everything else. And we have some drivers who, you know, do this as full-time–there’s a chunk of drivers who do it as a full-time job. And they, after expenses last year, one of our drivers found after 12 and 14-hour days he was making about $3 an hour.

SMITH: So they’re, you know, they’re–. The promise of making a lot of money through Uber just is not coming through for drivers. Uber is aggressively hiring more drivers, getting more drivers on the street, which is good for consumers. But more cars on the street means more congestion and it means more work for drivers. When drivers ask Uber about this, Uber’s response is to say, well, the more cars that are on the road the more money you’re going to make. Which is counterintuitive to the people doing the work. They tell us they aren’t until only12 or 14 hours in their workday. They can only take so many trips. How does more competition on the road make them more money?

So you know, they just feel that while, you know, nobody–nobody’s presuming that we’re fighting Uber or trying to get rid of Uber or anything else like that. It’s just really the workers that make Uber function that provide the transportation. Because this technology doesn’t exist unless there’s cars on the road. All they want to do is come together [inaud.] some of these conditions, that they don’t have right now.

DESVARIEUX: All right. Let’s talk a little bit more about what they don’t have right now, what they’re going to be fighting for. And how would this union actually be structured if they do decide to unionize?

What this legislation would do is it would give the right to, to the union to organize through Teamsters. And then the drivers, if they chose to organize, and we had a majority and they decided this is what they wanted to do, then they could actually sit down and negotiate a collective bargaining agreement, or a contract with Uber or Lyft, or the taxi companies, that would set their wages, their working conditions, maybe add benefits. Have a process in place where they could do something about the activation, which is a huge issue for them.

Right now all these things sort of happen at will to the drivers with no say. Deactivation without a voice, changing the rates without a voice, other requirements for your cars. Changing the requirements of the cars without drivers having a voice. And if they had a contract in place, they would be able to at least say all right, wait a minute, before we do that, let’s consider this from our point of view. How are, you know, let’s get our voice in it. And you would have a binding agreement that would hold both parties to task.

DESVARIEUX: Leonard, how close are you guys to achieving potentially having a union?

SMITH: Well, right now we have the association. And you know, it’s not a union in the traditional sense, but it functions as a union in that the drivers have come together collectively to get power over their working lives. So that’s a definition of a union.

As far as the other part, the legislation actually allowing the collective bargaining to take place, it’s hard to say because we’ve got about another four or five days before the legislation becomes law. There’s some rule-making and some infrastructure the city has to set up to administer the law and enforce it. And there are a lot of rumors floating around out there that Uber and Lyft, or perhaps some others, may be planning lawsuits to stop or delay the implementation of the law.

DESVARIEUX: Okay. All right, well, Leonard, please keep us up to speed about what’s going on with this story. We’d love to have you back on to give us an update. Thank you so much for joining us.

DESVARIEUX: And don’t forget, we are in the midst of our end of the year fundraising campaign. So please make a donation today. We can’t make the Real News without you. Thanks for watching.

Leonard Smith is the Director of Organizing and Strategic Campaigns for Teamsters Local 117 in Seattle, Washington.