As French President Emmanuel Macron continues his push for a stronger EU, it's becoming 'very clear that his agenda is a traditionally right-wing, pro-business agenda,' says author and journalist Laura Raim

As French President Emmanuel Macron continues his push for a stronger EU, it's becoming 'very clear that his agenda is a traditionally right-wing, pro-business agenda,' says author and journalist Laura Raim 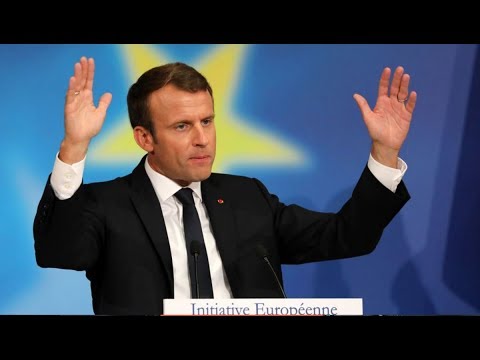 Less than five months after being elected, president of France, Emmanuel Macron, has already plummeted in popularity polls. He has plunged 22 points since the first Ifop poll published three months ago, when he enjoyed a rating of 62%, just after his May 7th election. Some polls have him as low as 40% in popularity. Is this due to his domestic policy, or his vision for Europe? The young president won the election against Euro skeptics on the right and the left, and promotes an agenda of strengthening the European Union.

President Macron spoke last week about his vision for post-Brexit Europe. Let’s have a listen.

Translator: Europe, too, is an idea carried by optimists, visionaries, an idea which we need to reappropriate for ourselves again and again, because the most beautiful ideas, those that drive us forward and improve the human fate, are always fragile, and Europe will only live through the idea of it that we have. It is up to us to make it stronger, more meaningful, and not be obsessed with the given format that history has given it, because the format will change, but the idea remains.

SHARMINI PERIES: To discuss Macron and his views is Laura Raim. She’s a freelance journalist based in Paris. She writes for radical publications, among them, “Le Monde Diplomatique.” She is the co-author of the book, ‘Casser L’Euro pour Sauver L’Europe.’ Thanks for joining us, Laura.

LAURA RAIM: Thanks for having me.

SHARMINI PERIES: Laura, let’s start with why the popularity of President Macron is in the decline, and is it related to his policies towards Europe, or is it his domestic policy?

LAURA RAIM: I’d say it’s primarily for his domestic policy. Macron campaigned saying he was neither left nor right. He was very vague with his promises. He was just talking about enthusiasm, and being modern, and being progressive, and he was never very clear on his very pro-market policies. Now it’s appearing very clearly that his agenda is a traditionally right-wing, pro-business agenda.

SHARMINI PERIES: Now, it appears that there is a lot of labor unrest, and there’s been a lot of protest against Macron’s policies, particularly towards workers. Give us a sense of what that unrest has been about, and how this has contributed to his decline in popularity.

LAURA RAIM: Well, the first thing people are very angry about is the anti-democratic nature of the way he’s doing things. Macron has said that democracy is not in the streets, when in fact, his own legitimacy as a president is very weak. The final draft of the labor laws were passed without any debate in parliament, so the government has introduced them by executive order. We should also be reminded the President himself was elected by only 43% of registered voters, and of those voters, only 43% voted for his program. The main reason they voted for him was as a default, as a barrier against the risk of a Marine Le Pen fascist, far-right government. So, his own legitimacy is, from the beginning, very weak.

SHARMINI PERIES: So, Laura, what’s in the decree that people on the streets are protesting against, and what is the policies of the Macron government, in terms of pursuing this decree?

LAURA RAIM: The idea behind these reforms is to say that France needs to dismantle its worker protections, to make France more competitive, and to make it more flexible, in order to tackle unemployment. This is completely untrue. All of the terms of the sentence are untrue, because he recently showed that the level of productivity, of the German and French economies is almost identical, as measured in terms of GDP per hour worked. France does not need to be more flexible. It’s very easy to fire employees today. Companies do it all the time. And, most of all, the OCD studies recognize that there is absolutely no correlation between more flexible labor laws and less unemployment.

We know for a fact that our French social model is not incompatible with low unemployment levels, because before the 2008 financial crisis, France had less than 7% unemployment, and it had exactly the same supposedly rigid labor law, or it had the same social system, the same amount of social spending. So, it has nothing to do with unemployment. It’s appearing very clearly to everybody that unemployment is just an excuse to move forward, and simply give more power to companies to impose whatever helps them make a bigger profit, and to strip workers of rights that enable them to have a say on their working hours, or working conditions, and have, basically decent working hours.

SHARMINI PERIES: Laura, rolling back on labor rights isn’t the only reason that Macron is falling in the polls. What else are his policies that are making him so unpopular?

LAURA RAIM: Well, you could also mention his regressive tax proposals that are a huge provocation. He’s basically proposing 4,000,000-euro tax cuts for the wealthiest ten percent, while also at the same scrapping housing aid to all students, taking away five euro per student. It’s symbolic, but it’s important. People are very angry by this.

Another symbol is that, in France we have a special wealth tax called the ISF, and he’s reforming that too, and he’s excluding yachts and private jets from this wealth tax. He’s excluding also anything shared … company shares. So, basically, now you can speculate, and that will no longer be taxed. The only thing he’s keeping in this ISF tax is housing, property.

So, these are extremely regressive tax proposals, and the fact is, people are more and more angry, and what’s interesting to see is, at the beginning, the only unions that were calling for protests, and calling for strikes, were the usual ones, the CGT, and Solidaires. And now, even the most moderate unions, [inaudible 00:07:30] and [inaudible 00:07:34], which is the unions of managers, even they are calling now for strikes and protests, not only against the labor reforms, but for all the other right-wing policies that he wants to implement.

SHARMINI PERIES: Laura, the global media coverage of France creates the impression that France is besieged by terrorist attacks day after day. There has been terrorist attacks in France, and of course this is a serious concern, but very little coverage exists when it comes to France’s social problems, its military adventures overseas, and so forth. But the erosion of civil liberties in the country, is this leading to his fall in the polling?

LAURA RAIM: Unfortunately, I don’t think so. It should, but I have the feeling that people are not as mobilized on this question as they should be. Unfortunately, this is not something that people are very sensitive to, even though he’s just passed into law an anti-terrorism bill which is basically just transferring all the emergency measures that he did, that the police has been using for the last two years. He’s transferring this into law with this anti-terrorism bill, but the truth is, there is unfortunately not much mobilization going on against this.

SHARMINI PERIES: Laura, let’s turn to Macron’s view and vision for Europe, as stated in his speech that we rolled in at the beginning of this interview. What are his plans?

LAURA RAIM: Well, he’s always campaigned on a very pro-European platform. This was actually the way he wanted to be identified as a candidate, neither left nor right, but European. This is a way to sort of try to reconfigure the political landscape between no longer the left and the right, but pro-European, progressive, enlightened, neo-liberal political offer against the archaic, closed, nationalist, racist Le Pen. That’s the way he tried to reconfigure the political landscape, so this is really part of his political identity, it’s to be very pro-European.

But then, when you look at his various speeches that he’s making here recently, it’s always so vague and empty. He talks about the idea of Europe. In the extract you just showed you can hear words like the idea, optimism, strong, meaningful, but we never know exactly how he’s going to address the real problems that have been plaguing Europe for the last 30 years, the fact when he says nothing about … I mean, he says the words “democracy,” “sovereignty” all the time.

He says the right words, but he says nothing about how to actually address the problems that have been plaguing Europe for the last 30 years. Nothing about the fact that Europe is profoundly anti-democratic. The fact that all the decisions are being made by non-elected bodies, the Central Bank, the European Commission. The fact that the single currency has always been completely flawed, has never managed to set the intuitions or the common budget. He doesn’t address the fact that the Eurozone is a dysfunctional, single-currency union that has never established the rules, institutions, the common budget that would enable it to compensate for the diversity of the various economies inside of Europe.

He doesn’t address any of these problems, and these are the main problems that we’re facing. The fact that the Eurozone has never achieved either prosperity or political integration. He says nothing about these things. He just has empty promises about the idea of Europe.

SHARMINI PERIES: Laura, thank you so much for joining us today.

SHARMINI PERIES: And thank you for joining us, here on the Real News Network.

Laura Raim is a free-lance journalist based in Paris. She writes for radical publications such as Le Monde diplomatique, Regards, La Revue du Crieur and Hors-Série. She is the co-author of Casser l’euro pour sauver l’Europe ( Les liens qui libèrent, 2014 ).