The EPA held its only public hearing on its proposed repeal of the Clean Power Plan in Charleston, West Virginia--but even in coal country, there was a lot of support for keeping the Obama-era regulation, says Liz Perera, Director of Climate Policy for the Sierra Club

The EPA held its only public hearing on its proposed repeal of the Clean Power Plan in Charleston, West Virginia--but even in coal country, there was a lot of support for keeping the Obama-era regulation, says Liz Perera, Director of Climate Policy for the Sierra Club 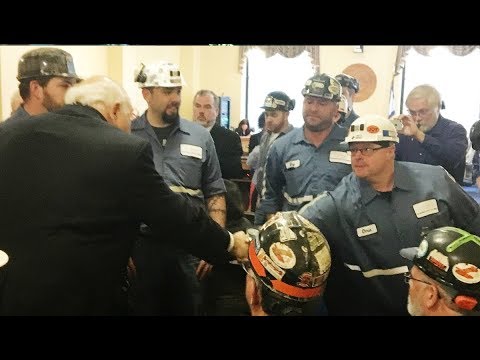 SHARMINI PERIES: It’s The Real News Network. I’m Sharmini Peries coming to you from Baltimore. This week the Environment of Protection Agency held its only public hearing on the Trump administration’s proposed plan to repeal the Obama Air Clean Power Plan. It was held in Charleston, West Virginia. West Virginia is the number two coal producer in the country and their production has been steadily declining since 2014 but the Trump administration wants to kick-start it. The Obama administration’s Clean Power Plan focused on reducing emissions for coal burning power plants as well as increasing the use of renewable energy and of course energy conservation along with it.

It was one of the main pillars of the U.S. submission to the Paris Climate Accord. To discuss the hearing that is underway is Liz Perera. She’s the director of climate policy and the Sierra Club. She joins us today from Washington DC. Thanks for joining us, Liz.

LIZ PERERA: Thanks for having me.

SHARMINI PERIES: Liz, you were at the hearing. Give us a sense of the hearings, and the atmosphere, and the circumstances you observed.

The Trump administration and Scott Pruitt, who he chose to be the head of EPA, decided to hold this hearing in an area where they thought would be extremely sympathetic to their side, the coal country’s capital which is in Charleston, West Virginia. The atmosphere was, I would say, since I actually came in first thing in the morning and gave my testimony and I came into a very small room at the capital of West Virginia and they basically had filled the room full of coal miners. There were only about 20 seats in the room total so they actually had decided to hold the most high profile testimony in a room that was tiny in order to pack the room full of coal miners and I was flanked by coal company executives, coal miners, some of the heads of West Virginia, attorney general’s office as well as some staff from the senators and representative’s offices.

It was tense. We also had tons of local folks who Sierra Club had been working to bring to this hearing to raise their voices and in reality of the, I think it was around 300 people that testified, it was actually quite balanced. There were about half and half and I’d say our side potentially had more supporters of the Clean Power Plan and the majority of those supporters were real people who had actually had bad experiences with the coal industry in the past generations of coal mining families that said, “We’re done with coal. We have been abused by coal companies for years. We want a new future for our children. We want clean energy. We want to address climate change.” That’s the real story that I saw of the day is that real people who were brought in actually wanted the Clean Power Plan and want to move to clean energy towards climate action.

SHARMINI PERIES: Now, I understand that coal CEO, Robert Murray used the allotted time he had for his testimony to rail against a legal excessive Clean Power Plan and his company, Murray Energy bussed in miners to attend the hearing. They of course did this in order to demonstrate that coal miner’s jobs are on the line. Is that what you heard while you were there from the people that are experiencing the effects of coal mining?

The coal companies have been fighting against them. Coal companies like Arch Coal have gone bankrupt and even though they’ve paid the CEOs of the company these massive sums, they have reneged on pensions for miners and healthcare for miners for years and this after these miners have already experienced terrible working conditions, already suffered major health impacts of their own. Some have even died at the hands of these coal companies. Really when you peer a little deeper into what’s going on here, it’s a very complicated story and unfortunately it’s a very sad story for the people of West Virginia and the coal miners of West Virginia.

SHARMINI PERIES: I understand that shortly after Murray’s testimony, a retired mine worker, Stanley Sturgill, who suffers from respiratory problems, pledged that, “As long as I can draw a breath,” he said, “I will keep fighting, working to fight climate change and protect the land and the country I love.” What was the response of the people to that?

LIZ PERERA: People were amazed by his testimony and I think that many of the miners in the room were very moved by his testimony. He was a fourth generation coal mining family and he said he needs a better future for his children and grandchildren. This has just been a legacy of abuse of these coal companies of these people. If you really ask coal miners the reality, the truth, many of them will admit the same thing. They do not feel they’ve been treated well by these coal companies and they would like to have better alternatives.

LIZ PERERA: You know, it’s interesting. I think that the Clean Power Plan was a rule under the EPA to regulate carbon pollution from existing power plants. Interestingly enough by the way, just because the Trump administration is trying to get out of this proposal to regulate carbon pollution from existing power plants, the Supreme Court has said no matter what, EPA must regulate this pollution. The Supreme Court of the land has already said you got to do this so no matter what, they can’t get out of it.

Interestingly enough the clean power plant’s approach under the Obama administration had money caught in the Power Plus plan to actually help communities that had been reliant on coal to transition to new jobs and get training. The next proposal, who knows what will be in it. I don’t think they understood that there was actual money in here for their communities to train, retrain them and to get better jobs.

In reality, I think there’s very little appetite for something like that in Congress right now. We’re not seeing any of their actual representatives go to the mat and fight for them for this type of retraining money. I do agree. I think that unfortunately there wasn’t a lot of education out there for normal folks on what the Clean Power Plan offered.

SHARMINI PERIES: Liz, is the proposed dismantling of the Clean Power Plan the reason Scott Pruitt was hired to head up the EPA?

LIZ PERERA: I do think that this was one of the very reasons. He’s also attacking numerous other pieces of public health regulation. He has basically rolled back rules to protect clean water, clean air, stop smog in our cities. He’s rolling back pretty much every public protection that the Environmental Protection Agency has issued in the last eight years, but President Trump knew and if you’ve seen the war on EPA documentary, Bob Murray is pretty frank that he went to Donald Trump and said, “Look, I’ve got all this money for you, for your campaign but you better hire somebody that’s going to roll back all these regulations and this Obama overreach at EPA.

He makes that very clear and that’s what President Trump is making good on. He was given money directly from coal companies and fossil fuel companies that actually hold the coal so they want their coal to be worth more. He was given money by them to run his campaign and now he is going and he has hired somebody who’s dismantling every public-health protection we have. This Clean Power Plan was one of the major things that he was pledging to roll back.

SHARMINI PERIES: After these testimonies and community meeting that was held by the EPA, what happens next?

LIZ PERERA: Next, we will likely see … As I mentioned earlier, the Supreme Court has ruled that the Environmental Protection Agency must regulate carbon pollution from power plants. EPA has to issue some type of plan on how it proposes to do that. As we all know, they don’t really want to regulate this pollutant so they’re going to put forth something that’s extremely weak and we will probably see that in the next couple of weeks. There will be another opportunity to comment as well.

It’s very important that all of us raise our voices and opposition to this as well. Then in the future, we will probably have to sue that proposal because it’s inadequate and it won’t actually reduce much carbon pollution at all. That’s the next steps there. EPA will continue to have its feet put to the fire by the courts to actually regulate carbon pollution from power plants. No matter what, we have the court on our side, we have the people on our side, and we’re going to fight them in the street, we’re going to fight them in the courts, and we’re going to see to it that we see justice.

SHARMINI PERIES: All right. Thank you so much for joining us today, Liz and all the best with your struggle there.

LIZ PERERA: Thank you so much. I really appreciate the opportunity.

Liz Perera is the Climate Policy Director with the Sierra Club in Washington, DC. She primarily works on climate change and energy policy at the federal and state level. She also works on resilience/adaptation issues and environmental and economic justice issues. She serves as Sierra Club’s representative to the Combined Defense Project and the Climate…