How the Working Class Can Fight Corporate Giants pt2

How the Working Class Can Fight Corporate Giants 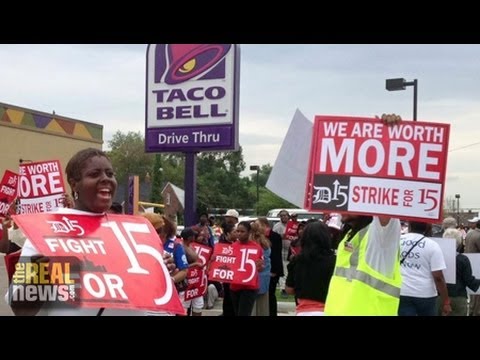 This is part two of our discussion with Leo Panitch. He’s the Canada Research Chair in Comparative Political Economy and a distinguished research professor of political science at York University of Toronto, author of many books. You can go and just read below the bio and check out a whole list of Leo’s work.

So in the first part of the interview, Leo, we talked about how this rising inequality we see across our society really stems from a loss of power in the labor movement. But we want to also talk about how the working class and how organized labor can help address some of these problems. What would an effective strategy look like?

LEO PANITCH, PROF. POLITICAL SCIENCE, YORK UNIVERSITY: Well, I think that unions need to put far, far more resources than they’re currently doing into organizing, and organizing people in a broad array of arenas of their lives, not only in the workplace.

You know, SEIU is putting somewhere between 100 and 200 staff into the fight for 15, which is the fight for a living wage in the fast food sector, etc. And that’s impressive, but it’s not nearly enough, given the scale of the problem.

Here in Canada, there’s been a big union merger between the Canadian Auto Workers and the chemical energy and paper workers in Canada, producing the largest private-sector union in the country. And they’ve committed to creating branches for people who don’t have collective-bargaining rights, who are precarious workers, etc. But there’s very little evidence that they’re putting the resources into hiring the army of organizers which are needed to make this happen.

So this just isn’t good enough. And we need to go back, as I was saying in our earlier interview, to the example of the 1930s when the CIO, led and staffed by some very, very radical people later accused of being communists because there were so radical–most of them weren’t–who devoted their lives to organizing, this does mean that they won’t be able to pay those organizers fat bureaucratic union salaries, and that’s a good thing. That also needs to be part of the consideration in terms of reducing income inequality.

And that army of organizers, which was driven out of the American labor movement in the late 1940s and 1950s, needs to be brought in. And heaven knows there’s enough radical young people–we see that from Occupy. We’ve seen it from the anti-globalization protests going back to Seattle in 1999. They need to be supported, given the means of doing the kind of organizing in the community broadly, not just with groups of workers in this or that retail store, to re-kick unionization. This is not impossible. It’s been done before. And I think you’re right to be wanting to ask what unions themselves need to do, rather than immediately turn to the question of what type of legislation might be passed, although heaven knows there’s lots of what could be done in that respect.

I think it’s really good that you’re focusing the questions on what unions themselves need to do and not so much on what governments need to do by way of legislation, ’cause that can only be supportive.

That said, I think that the record of the Obama administration has been absolutely appalling in this respect. But it really does first come down to what unions themselves do.

And although one is happy to see the kind of actions that are being supported–and these mostly are coming from below. They’re not being, you know, led from above by the SEIU. The SEIU is supporting what’s going on from a great many retail workers and fast food workers. But it’s not nearly enough. And you’re asking the right questions to ask what unions need to do and why they haven’t been doing it enough.

NOOR: And it certainly sounds like you’re talking more about a social movement rather than something that’s just exclusively limited to organized labor.

PANITCH: Yeah. We need a trade unionism that is a class unionism, that it is prepared to stop talking itself, in terms of competitiveness, which is, of course, designed to make companies competitive. And to undermine union solidarity, worker solidarity, to make workers compete with one another is really what competitiveness is all about, and rather than standing up together against their employers or against the capitalist classes more broadly.

So, you know, it really is a new trade unionism that we need, a union–you can call it movement unionism, but it really needs to be a unionism that is class-aware, that is speaking in terms of the working [incompr.] that is not afraid of using such language, that is trying to develop and support working-class identities in their community. This was done previously, and is the only way in which we’re going to get at ameliorating the appalling inequalities that currently exist.

NOOR: Leo Panitch, thank you so much for joining us.

PANITCH: Really happy to be with you.

NOOR: We’ll link to both parts of this interview at TheRealNews.com. You can follow us on Twitter @therealnews, Tweet me questions, story ideas, and I’ll be asking our viewers questions on my Twitter handle, which is @jaisalnoor.