They have managed to contain a massive capitalist crisis and they may actually be realizing that massive government sector spending is required to save capitalism, says Prof. Leo Panitch the author of The Making of Global Capitalism.

They have managed to contain a massive capitalist crisis and they may actually be realizing that massive government sector spending is required to save capitalism, says Prof. Leo Panitch the author of The Making of Global Capitalism. 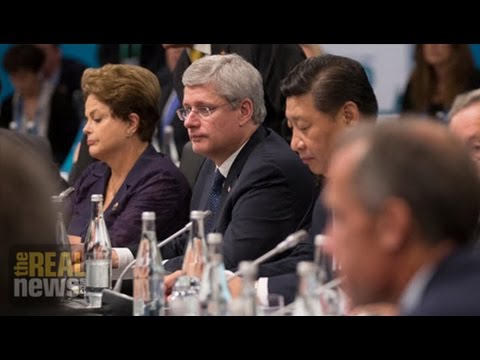 The G20 leaders met and approved a Brisbane action plan in Australia last week and made a commitment to grow the G20 economies by $2 trillion over their current projected growth–that is, 2.1 percent of their collective economies–by 2018. Is this a good thing for us?

Joining us now from Toronto to discuss the plan is Leo Panitch. He is the distinguished research professor of political science at York University in Toronto. He is the author of the U.K. Deutscher book prize The Making of Global Capitalism: The Political Economy of the American Empire. He is also the coeditor of the most recent issue of the the Socialist Register for 2015 on transforming classes.

Thank you for joining us, Leo.

PERIES: So, Leo, is this a good thing, $2 trillion worth of growth over their projected growth already?

PANITCH: Well, it’s not to say they’re going to achieve it. On the contrary, what they’re very worried about is that 2015 will be the eighth year after the great financial crisis began. It began in 2007. And they’re very worried that there’s going to be a downward dip again, another instance of the Great Recession.

It’s very important we understand what the G20 is in this respect. It–the first leaders meeting of the G20, before that it was a meeting held of finance ministers and central bankers, brought into being by the American Treasury as a means of helping to stabilize the financial architecture after the great Asian Financial Crisis in the late 1990s. The first meeting of the leaders took place in the fall of 2008. They were summoned to Washington by President Bush, by George W., in October 2008, when it was seen that the attempt to contain that crisis wasn’t working. And they were very, very working worried, the Americans. All of the central bankers and finance ministers in the G7–big, major capitalist countries–were worried that we were going to turn into another Great Depression, and that would lead, as the Great Depression of the ’30s did, to protectionism, to the breaking of free trade agreements, to the introduction of capital controls which could stop the free and open flow of capital, etc. And they got the leaders of the G20, including all the big Third World countries, the first time they were meeting, to commit themselves to a open economy in the middle of that crisis, to commit themselves not to introduce barriers to trade, not to introduce barriers to private investment and capital flow. And they’ve maintained that commitment. And the most important thing that happens in G20 meetings is that they reiterate that commitment at each one. And they did at this one. That was far, far more important than this stuff on projecting global growth. And as part of this, they commit themselves to promoting competition, entrepreneurship, and above all–and this is the first thing in the communique that’s a commitment–structural reforms that will, as they put it, lift private sector activity.

And I have brought along a quote from Stephen Harper, the Canadian prime minister, who said The G20, whatever its deficiencies, is one of the most valuable summits I go to every year. (…) [I]n the end, the G20 is really the sole element of governance that we have in what is now a globalized economy.”

Now, why the 2 percent think matters is, as I said, they have managed to contain this massive capitalist crisis, the fourth great global crisis in capitalist history, but–they’ve contained it, but it’s by no means over, and they know it. And the Japanese economy is tanking. The European economy threatens to go into recession, including the German. And even though the American economy has recovered somewhat, although it shows itself in terms of reduction in unemployment rates–but as we know, it doesn’t show itself in terms of the kinds of jobs that people are getting, the number of people who’ve dropped out of the market, youth unemployment, and so on–they’re very worried that this thing will yet get out of control. So they, together with all these commitments, neoliberal commitments, which have been at the base of the making of global capitalism the last three decades, they also are committing themselves not to continue in a unflexible way with the fiscal austerity which has been operating since 2010 and which the G20 endorsed in 2010. After 2008, they all agreed to a large coordinated fiscal stimulus. In the United States case and the Chinese case, it was the biggest in peacetime history. But then they got frightened by the size of the deficit, and they were especially frightened of what bond markets would do–not to the U.S., because the American Treasury bills are better than gold, but would do to other countries. The Germans in particular are fixated on this question of having a balanced budget.

Now, what’s significant about this communique is not this target of 2 percent growth, but that they explicitly say that they want to be more flexible on fiscal policy and that they want monetary policies that will prevent deflation. The worst thing that could happen in a crisis like this is that prices start falling, and then people hold off buying anything because they think a month later–or, for that matter, maybe even 24 hours later–prices will be even lower. So this is a very unorthodox monetary policy too, whereby governments essentially print money or buy their–central banks by their own bonds, etc.

So what they’re showing here is not neoliberal at all in that sense. They are finally coming to a realization–and I’m sure they have to put a lot of pressure on the Germans to agree to this–they’re coming to a realization that they need much more active government spending. They’ve committed themselves to a infrastructure plan which involves both public and private infrastructure spending on transit, on sewers, on roads, and so on.

Now, this mainly will be of a kind that is known as PPP, private public projects, whereby you use some public money to get–to underwrite and to guarantee private investment in infrastructure, from which usually the private companies come away doing very well in terms of profits. And if they don’t, the private sector gets–the public sector, rather, the government, gets stuck with the bill.

So I hope that helps lay out the general terrain that we’re in right now.

PERIES: Leo, let’s continue this discussion in a second segment.

Please join me on a second segment with Leo Panitch on the G20 in Brisbane.