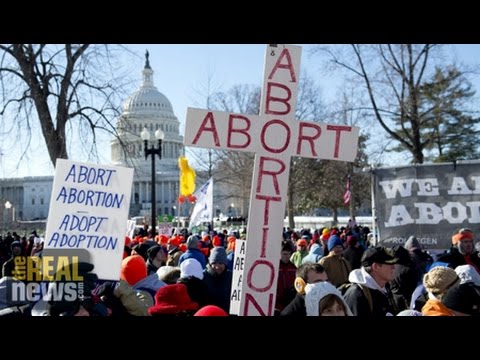 On Thursday, the House voted on a bill that would ban taxpayer-funded abortions. The vote was mostly split along party lines, with three Democrats voting for it and one Republican voting against it. However, this was not the Republican leadership’s first choice when it comes to antiabortion legislation. They originally planned to vote on the Pain-Capable Unborn Child Protection Act, which would ban abortions for women who are beyond 20 weeks into their pregnancy. A similar version of that bill was approved by the House in 2013.

Now joining us from New York City to discuss the significance of the bill is Lynn Paltrow. Lynn is the founder and executive director of National Advocates for Pregnant Women.

Thank you so much for joining us, Lynn.

LYNN PALTROW, EXECUTIVE DIRECTOR, NATIONAL ADVOCATES FOR PREGNANT WOMEN: Thanks for having me.

DESVARIEUX: So, Lynn, let’s first talk about what actually did get passed this Thursday. What does this ban on taxpayer dollars funding abortions actually do?

PALTROW: Well, I want to start by saying that there’s a way in which we’ve allowed the language to write the people directly affected out of it. So what this is is an attempt to ban women from equal access to health care and the benefits of the ACA for that health care. So it’s a direct–it’s a law that’s basically gender-discriminatory, and 84 percent of women by the time they are in their 40s have gotten pregnant and given birth. So what this is an attempt to do is to write women, in certain circumstances, out of the kind of health care that every American has a human right to get.

DESVARIEUX: Alright. Let’s talk with the other bill that didn’t make it to the floor, the Pain-Capable Unborn Child Protection Act, which I explained earlier would ban abortions for women who are beyond 20 weeks into their pregnancies. How could that affect women?

PALTROW: Well, two things. First of all, it’s a ban on pregnant women–those are the people who sometimes need abortions–from having a kind of health care that they need.

But what people don’t recognize is that these measures affect all pregnant women, not just those who want to end their pregnancies. The argument for the ban is one that has not stayed limited to women who seek to end their pregnancies. Twenty-one states already have laws like these. West Virginia is trying to pass such a law. We understand that members of Congress are going to keep trying to pass such a law. But the work that we do focuses on the ways that antiabortion arguments and laws are being used not only to prevent women from having the abortions they need, but also resulting in forced medical interventions and arrests of women who aren’t trying to end their pregnancies.

DESVARIEUX: So, Lynn, do you have an anecdote that can support that?

PALTROW: Early on in my career I got a call from a court in D.C. about a 27-year-old woman who was 25 to 26 weeks pregnant. She was critically ill. And she and her Catholic family and her doctors were all in agreement that they should do everything they can to keep her alive.

But a hospital neonatalogist (frankly, quite arrogantly) decided that she could save all 25-week fetuses, ran to the hospital lawyer, and said, we should make her have a cesarean surgery right now so we can save that unborn child. And the lawyer, who should have said, wait a minute, have you talked to this woman, she’s a person, have you consulted with her doctors, they called an emergency hearing, and in the course of the afternoon they appointed a lawyer for the 26-week-old fetus. A lawyer was appointed for Angela, who did the best he could, but it wasn’t a lawyer she picked, it wasn’t a lawyer who had an opportunity to learn what the case was about or speak to her doctors.

And in the end, even though the judge understood that forcing this critically ill woman to undergo cesarean surgery could result in her death, the judge said that he had an obligation to give his fetus a chance for life and ordered the surgery. She was taken out of intensive care. Her right to liberty was denied. She was taken to a surgical ward, where she was forced to have cesarean surgery. She was saying, I don’t want it done, I don’t want it done. And, in fact, the fetus was born alive but died within a few hours, and this woman, Angela Carter, died two days later, with the cesarean surgery listed as a contributing factor.

And one of the arguments that was made in defense of what happened to her is that since the state can make women continue their pregnancies to term and ban abortions at a certain point, they can also deprive pregnant women, who are just trying to stay alive or who are seeking to go to term, of their right to life, their right to liberty, their right to medical decision-making, the right to bodily integrity, and force them to undergo procedures that somebody who doesn’t even know them forces them to have.

I’m happy to say that our lawsuit challenging that court order did result in a decision in the District of Columbia saying that, no, women at no stage of pregnancy lose the right to medical decision-making or due process. Imagine if even people convicted of murder–criminals convicted of murder in states with the death penalty typically get 12.5 years of due process before the state can put them to death. But Angela Carter got an afternoon, ’cause she was, what, just a pregnant woman.

So the argument for why the government should be able to take a group of people, pregnant women, decide for them what medical care they can and cannot have, doesn’t stay limited to just abortion. It has been used not just in that case but in numerous cases across the country. And I’m happy to tell you those stories as well.

DESVARIEUX: Lynn, I want to talk to about those arguments that you were referring to of people who are antiabortion. And specifically, there is a group of people that is more sympathetic for the antiabortion campaign, simply because they feel passionate about the preservation of life or potential life, however you want to argue it. They are against the death penalty, the proliferation of guns in our country, and things of that nature. What do you say to those folks?

PALTROW: Well, I think those folks, I think there’s a lot of agreement, and I don’t think those folks are supporting laws that make abortion criminal. The pain-capable law that we were talking about creates, perhaps only the second time in U.S. history, a national, federal law addressing abortion that makes it a federal crime. And while it says it’s limited to the people who perform it, there are now cases around the country where women who, in desperation, because there are fewer and fewer abortion providers, have found a way to end their own pregnancies. They’ve been arrested in Idaho. They’ve been arrested in South Carolina and other parts of the country. I think the folks that you’re talking about don’t want to see women go to jail, and I think that they share a lot of the same values as many people who identify as pro-choice, that they want to see meaningful sex education, they want to see meaningful access to contraceptions, so that the need for abortions is significantly reduced.

DESVARIEUX: Alright. Lynn Paltrow, joining us from New York City, thank you so much for being with us.