LÃ©once Ndikumana: $619 billion of embezzled capital flight from North Africa with connivance of big banks according to new research

LÃ©once Ndikumana: $619 billion of embezzled capital flight from North Africa with connivance of big banks according to new research 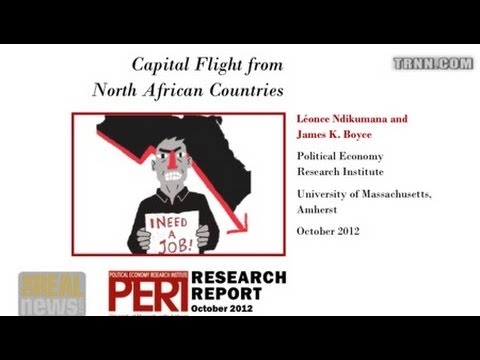 A few months ago, we did a series of interviews based on the book Africa’s Odious Debt. Well, there’s new research from one of the authors, and he joins us now to talk about that. LÃ©once Ndikumana is a professor of economics at the University of Massachusetts Amherst. He’s the director of the African Policy Program at the Political Economy Research Institute, PERI. And he’s coauthor of the paper Capital Flight From Sub-Saharan African Countries: Updated Estimates, 1970-2010. Thanks for joining us again, LÃ©once.

LÃ‰ONCE NDIKUMANA, DIRECTOR OF THE AFRICAN POLICY PROGRAM, PERI: Thank you very much for the opportunity.

JAY: So part of the new research was that you looked at Northern African countries. Your previous research was more on the south. So what did you find?

NDIKUMANA: As you correctly mentioned, most of our research in the past has been on Sub-Saharan Africa, looking at how much capital flight has been fleeing the continent, the subcontinent over the past four or five decades. But this time we have [incompr.] on North African countries. We have looked at four countriesâ€”Algeria, Egypt, Morocco, and Tunisia. And we find that [incompr.] in Sub-Saharan African countries there has been a large amount of capital flight from those countries. And the pattern [has been] very similar.

JAY: Before we go further, just for the people that haven’t watched the previous interviews, just talk quickly again about what this capital flight is and why it matters.

NDIKUMANA: Our analysis looks at capital flight because we believe it’s an important development issue. It’s a process where money comes to Africa in the form of loans. Money is generated from exploitation of natural resources and then goes missing. And it’s deposited in private accounts abroad and is not recorded with government officials. That amounts to a net loss to African countries.

Normally, it’s typically the product of corruption, embezzlement by African private and political agents. But this is facilitated by the [incompr.] hand from global financial centers that are waiting to accept and take in this money and put it in private accounts and not report it to government officials, so what is referred to as secrecy jurisdictions, safe havens, in around the world.

JAY: Yeah. An important point I think you just mentioned, but this is all done with the connivance of the big banks in Europe and North America, who know this is happening, and they facilitate it.

NDIKUMANA: Yes. And what is really appalling is the fact that world is [incompr.] Africa with one hand [incompr.] with the other, in the sense that we find that more than half of the money borrowed by African countries ends up in private accounts in the form of capital flight.

JAY: You looked at North African countries. What did you find?

JAY: Now, we discussed in the previous interview this concept of odious debt, that there’s a basis in international law for saying that if the lender knows the country borrowing the money, number one, can never repay it, and number two, that it’s going to be embezzled, that that’sâ€”the people of that country shouldn’t bear the burden of that debt, and it’s declared odiousâ€”and if you want to know more about that, watch the other interviews, ’cause they’re going to be linked just below this video. But in that regard, there is now actually some attempt by Tunisia, if I have it correctly, to actually declare some of its debt odious. Tell us what’s happening there.

NDIKUMANA: The new government of Tunisia, which is the one that came after the revolution, is basically calling for a close scrutiny on the past debts incurred under the Ben Ali regime, because, really, if you look at the massive amount of wealth amassed by Ben Ali and his family, the family of his wife, then you wonder where all that money was acquired from. And the question is whether some of the past loans may have contributed to this private wealth accumulation. So the government is calling for a detailed analysis or audit of the past debts. And there is a lot of public support for this call. And there is also global support for this kind of initiative.

I just want to mention that from the donor side, Norway has just approved a new regulation which authorizes audit of its own loans to developing countries, and the process is going to start immediately, and a report should be out by the end of next year. We really hope that this will give an example to all other donors, other lenders, public lenders, and hopefully of private lenders, to really embark on transparency on full speed, which would help both the lenders and the borrowers.

JAY: And the point is, if this audit shows that some of this debt never went to the good of the people of the country or, for example, to the infrastructure projects it was supposed to go to, then the country in question should be able to say, we’re not going to pay it.

JAY: Is there any movement like Tunisia’s in some of the other North African countries?

NDIKUMANA: I haven’t heard any similar movement in the other North African countries, but [incompr.] in 2011 where Tunisia was the vanguard [incompr.] revolution. We hope that this movement is going to spread not only in North Africa, but also the rest of Africa.

JAY: Just for people that haven’t seen the earlier interview, just one more time go over some of the numbers. I think the fundamental conclusion was that Africa actually would be a creditor nation if this capital flight and mostly embezzled money was returned. What are those numbers again?

NDIKUMANA: Foreign direct investment, $461Â billion. It exceeds the amount of official aid that was given to these countries, which amounts to $867Â billion. So the perception that Africa is heavily indebted to the rest of the world, is debt-dependent on the rest ofâ€”or aid-dependent vis-Ã -vis the rest of the world, is really not factually true, ’cause if Africa could keep all its resources onshore, they would not need to borrow and they would not need to go around asking for aid.

JAY: Thanks very much for joining us, LÃ©once.

NDIKUMANA: Thank you very much.

JAY: And don’t forget we’re in the midst of our year-end fundraising campaign. Every dollar you donate gets matched till we reach $100,000. So somewhere around this video player you’ll find a Donate button. If you don’t click it, we can’t do this. Thanks for joining us on The Real News Network.

Leonce Ndikumana is Professor of economics and Director of the African Development Policy Program at the Political Economy Research Institute (www.peri.umass.edu) at the University of Massachusetts at Amherst. He is a member of the United Nations Committee on Development Policy, Commissioner on the Independent Commission for the Reform of International Corporate Taxation, a visiting Professor…