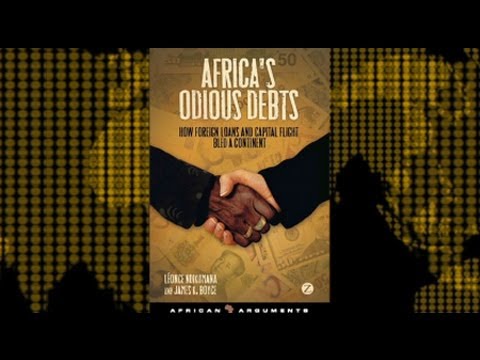 If you watch The Real News, you might have seen a series we did a few months ago exploring the concept of odious debt. That’s where a country’s ruled by dictators, borrows money, in modern sense, from, usually, Western big banks, and those banks understanding and knowingly lend this money to this dictatorship knowing the money will not benefit the people of that country, knowing that that country’s unlikely to be really capable of repaying these debts. And the concept of odious debt is that a subsequent government can declare these debts odious, that the banks should have known better, and not pay them back. Well, now an African country is apparently saying exactly that.

Now joining us to talk about the issue is LÃ©once Ndikumana. He’s the director of the African Policy Program at the Political Economy Research Institute in Amherst, Massachusetts, and he’s also the coauthor of the book Africa’s Odious Debt: How Foreign Loans and Capital Flight Bled a Continent. Thanks very much for joining us, LÃ©once.

LÃ‰ONCE NDIKUMANA, DIRECTOR OF THE AFRICAN POLICY PROGRAM, PERI: Thank you very much.

JAY: So talk to us what’s happening in Tunisia, becauseâ€”maybe quickly tell us, remind us again what the historical precedent for this is and then what is Tunisia saying.

NDIKUMANA: Thank you. First of all, Tunisia is in the north of the African continent. And many people remember the country as the origin of what is now being referred to as the Arab Spring, where a popular revolution toppled the regime of Ben Ali. But Tunisia had been in the headlines before as one of the most best-performing African economies in terms of growth, competitiveness, and also even in terms of political stability.

But now the country’s back in the headlines again as the new government is proposing to take a very original historical stance on the debts incurred by the past regime. And the new president is basically saying that they want a systemic audit into the debts incurred by the Ben Ali regime, to establish the legitimacy of those debts. What they don’t want to see is that they are shortchanging the Tunisian people by paying debts which may have contributed to only enriching the Ben Ali regime and his associates.

JAY: Now, Ben Ali is the last dictator, who was overthrown. And this concept of odious debt, the American government in fact historically has recognized this as a legitimate concept in international law, correct?

NDIKUMANA: Yes. The United States government has recognized it and actually used it. For example, after the war in Cuba, the government refused to acknowledge, to recognize the debts incurred by the past regime. We also remember that after the Iraq War, the U.S. government really militated for the annulment or the cancellation of the debt that the Saddam Hussein regime had incurred, under the argument that that debt actually isâ€”some of the debt was used to consolidate the oppressive regime of the Saddamâ€”by Saddam. So it was argued that it would be unfair to ask the Iraqi people to continue paying those debts.

JAY: Now, one of the things that happens in many African countries is that this money gets loaned to the country, but the regime in power actually pocketsâ€”individuals in the regime actually pocket the money and put it right back in those same banks’ bank accounts, except in their personal bank accounts, and the banks know all of this. That’s part of the argument. Is that also part of the argument in Tunisia?

NDIKUMANA: Yes. The point is that debts can be distinguished between the amounts that were used to finance development programs, including infrastructure, educationâ€”and there’s plenty of good infrastructure and there’s plenty of good education in Tunisia. Those debts will be honored. Thatâ€”the president has made it very clear. But the debts that cannot be traced to any use for development purposes, certainly having been squandered and embezzled by the former regime, will not be legitimate, and those should be repudiated by the current government.

JAY: So this is a big deal for the banks, because this would establish a very important precedent. I mean, even if the money embezzled (if there was) in Tunisia may not be, you know, that much (we’ll see how much it is), you’ve analyzed other countries with a similar situation, and I think you’ve said sometimes the amount of embezzlement is up at 80 percent of the loans, that the majority of the money was actually embezzled. So if this precedent is established of having to audit before any repayment takes place, this opens up a whole can of worms from the point of view of the banks.

NDIKUMANA: Yes. In fact, weâ€”even in the book we argue that for the long term, the debt audits and the repudiation of odious debt would actually serve the interest of bankers and the global financial system in general, because it will set a precedent to enforce transparent management of loans. In the case of Tunisia and why it is a very interesting case is the audit will certainly find that a large amount of the loans were used for development purposes. And that would reassure the lenders. But it is useful to be reassured that none of the private wealth amassed abroad was financed by external loans. That would be reassuring for the lenders as well.

JAY: Well, except for those lenders who are in on the deal.

JAY: So what’s happening, then, in terms of cooperating with the audit? First of all, does Tunisia need the banks’ cooperation to do a proper audit? And if it does, is there any sense they’re going to cooperate in this? ‘Cause I guess to cooperate, they’re going to have to agree with the underlying assumption that Tunisia may be able to say, we’re not going to pay part of this.

NDIKUMANA: First of all, technically Tunisia doesn’t need the cooperation of the banks. Tunisia has the record of the loans that came into the country. And Tunisia is going toâ€”the leadership is going to put together a team. If they want to do it the way other countries have done it, for example Ecuador, would be to put together a team, an objective team, probably including international experts, ’cause you need a high degree of objectivity to evaluate the sources and uses of external loans.

Now, if Tunisia, if the commission that would be put in place, that cannot trace the use of a particular loan, the burden of proof is on the bankâ€”not on the country, not on the peopleâ€”it is up to the bank to then demonstrate how the loan was used, how it was used to finance development. If they cannot provide that proof, then the loans should be considered as odious.

JAY: Right. Now, this is, I said, a very big deal to the banks, because if this leads to a whole examination of lending practices to Africa and embezzlement and banks’ collaboration or collusion with the embezzlementâ€”you’ve pointed out in your book that Africa as a whole is essentially a creditor continent, not a debtor continent, if they could recover all of this embezzled money. So what is the attitude of the banks so far vis-Ã -vis Tunisia? Do they even accept the concept that there is such a thing as odious debt?

But what is encouraging again is, first of all, domestically, to see a leadership that really is willing to take that stand, historical stand, to basically be on the side of the people because it’s in the interests of the Tunisian people.

Secondly, what is also encouraging is that there are some signs internationally of goodwill to cooperate and help and assist the Tunisian government, includingâ€”for example, I read some news where the Belgian government has declared that it will declare odious any debt thatâ€”I mean, it will cancel any debt that’s found to be odious by the debt audit. The Swiss government has been cooperating with the investigators from Tunisia that are trying to track down the illicit wealth by the former regime.

I think that this moment, this time is as good as it has ever been in terms of providing a chance to any government in Africa to really look into, closelyâ€”look closely into past debt. With all the pressure on tracking down illicit financial flows, financing that may be financing terrorism, all the efforts to beef up the anticorruption legislation in the U.S., in the U.K., all that really militates to providing a context where a willing government with a determined leadership can actually advance the cause or the fight against [crosstalk]

JAY: Okay. Alright. We’ll come back to you, then; when this audit proceeds and we’re deeper into it and we see what Tunisia concludes, we’ll come back and talk to you again about this. Thanks very much, LÃ©once.

JAY: And thank you for joining us on The Real News Network. And don’t forget, if you want to see more reports like this, there’s a "Donate" button over here, ’cause if you don’t click on that, we can’t do this.

April 9, 2018
Sign Up for Our Newsletter
Help Us Make Real News!