In a split 4-4 decision, deep-pocketed interests like the Koch Brothers & the John Birch Society lost ground in their decades-long battle against unions, says Center for Media and Democracy's Lisa Graves

In a split 4-4 decision, deep-pocketed interests like the Koch Brothers & the John Birch Society lost ground in their decades-long battle against unions, says Center for Media and Democracy's Lisa Graves 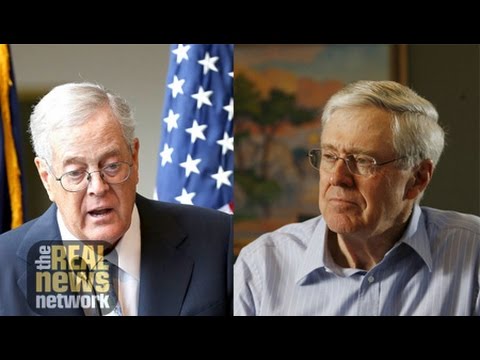 Public unions in America can breathe a sigh of relief. Supreme Court justices are split four to four on the issue of whether or not unions should be allowed to collect mandatory agency fees from non-union members who benefit from collective bargaining. At the center of the case is Rebecca Friedrichs. She’s a California public school teacher currently paying agency fees, but she says she’s not interested in paying fees even though she benefits from collective bargaining.

REBECCA FRIEDRICHS: I never asked the unions to represent me. They are the ones who requested laws to give them the right to bargain on behalf of everyone.

DESVARIEUX: It seemed like Ms. Friedrichs would get her way after the court heard oral arguments, but with the death of Supreme Court justice Antonin Scalia the Court was unable to break the tie. Therefore, the Court affirms the decision of the appeals court, which ruled in favor of public unions.

Now joining us to give us the story behind this split is our guest, Lisa Graves. She’s the executive director of the Center for Media and Democracy. Thanks so much for joining us, Lisa.

LISA GRAVES: Thanks for having me on.

DESVARIEUX: So Lisa, this was a big victory for unions, but on the other side, of course, there’s the losing party. Which interests were really behind bringing this case forward and, essentially, who really lost here?

GRAVES: Well, I think the American people are the big winners in this case. This is a case where there’s been tremendous amounts of special interest money that has been in works for many, many years to try to undo longstanding legal precedents that protect against free riders like Rebecca Friedrichs. And so, in this instance what we know for a fact is that the State Policy Network, which is funded by some of the biggest billionaire and millionaire CEO families in the country, helped organize the rallies around the Supreme Court hearing, and we know that this agenda dates back several decades. It goes back so far the Charles Koch and David Koch’s dad, Fred Koch, was involved in this effort to try to push efforts to break unions, to crush unions dating back to the 50’s.

And so, what’s happened here is that you have a Supreme Court that, due to some appointments by President Bush to that court, they have a majority, or at least they had a majority who was willing to strike down literally decades of precedent in an extreme case of judicial activism, and but for the untimely death of Justice Scalia they would have done just that. They would have destroyed decades of legal precedent, decades of working arrangements to protect working people in this country, to protect unions and to make sure that unions aren’t subject to these free riders like Rebecca Friedrichs.

DESVARIEUX: What about folks who say this is really a First Amendment issue. You heard Ms. Friedrichs in that soundbite make the case for that. Why should people have to pay for a service, like collective bargaining, that they didn’t ask for?

GRAVES: Well she’s a part of a workplace, and, you know, they’ve tried to dress this up as a First Amendment claim. It’s really not a first amendment claim. This is a case in which you have a union that bargains on behalf of all of the members, all the teachers in that instance, but it could be firefighters, teachers, nurses or other public workers, and every employee benefits from that union negotiation.

And so she’s really trying to mask her own selfishness to receive these benefits and not pay any fee, even the small fee that the unions charge to represent the employees in these contract negotiations and also defend employees if they’re wrongfully discharged, and so she’s a classic free rider. She may make for a good photo op, but the fact is that she’s put forward as the face of a movement that really has been propelled by many anti-union corporations and CEOs for many decades to try to destroy these legal precedents.

It’s a classic case of judicial activism and the capture of the court by these forces, that they thought they could destroy these decades of precedent if only Scalia had remained on that court.

DESVARIEUX: I want to talk about the layers of this case, because at the center of it, of course, is public, is dues for being a member of public unions and so on and so forth, but there’s also the issue of privatization. How would have, if this ruling went the other way, how would it have affected a public sector like education?

GRAVES: Well, I think what we’ve seen in a number of states as different measures to basically limit fees for unions have taken hold in different ways, what we’ve seen is a real devastating impact on those unions and the kinds of services that they can provide to their members, and so I think that that certainly affects that work force, those public sector work forces, but we also know that unions really help set the standard that has raised our middle class, that has carved out and fought for benefits that everybody benefits from in terms of the private sector and the public sector, that unions have been a leading voice in helping us to have a 40-hour work week for many people, to have a weekend, to have health benefits that, you know, really make sure that our families are protected if we get sick or if they get sick, and so weakening union bargaining power really weakens all of us, most Americans, in their ability to secure better wages and better benefits for their families.

DESVARIEUX: This decision really could have been catastrophic for public unions, and some folks might be asking themselves, how did the unions get themselves in this position to begin with? Do you see that there is some level of accountability on the part of union leaders or the Democratic Party, or even both in terms of why public sector unions are being attacked and folks like the Koch brothers are really going after their jugular?

GRAVES: I think of it the opposite way, quite frankly. What you literally see and you can trace historically back to the 1950s, was an effort by a number of business groups, the National Association of Manufacturers back then in [the] 1950s along with the John Birch Society, which Fred Koch helped found along with other groups that were extremely hostile to the idea of unions, the idea of having collective bargaining, these were sort of extreme anti-communist forces that saw communist boogeymen everywhere, even in the most basic institutions that have grown up in our country to protect American workers, like unions, and so this is a multi-decade effort.

It includes the right-to-work, so-called right-to-work efforts. It includes this variety of these so-called paycheck protections. It includes measures like the efforts by Ms. Friedrichs. So this is the culmination of many decades of work by a very small number of CEOs and billionaires who are determined to really weaken the rights of workers in this country, and including their rights to be represented and to have strong, robust unions to negotiate with. And so I don’t lay the blame with the unions at all.

They have been under assault by these organizations including, in this modern era, by the American Legislative Exchange Council, which the Kochs are collectively, through their many vehicles, the biggest funder of, the State Policy Network, which are these state think tanks, or stink tanks, that push and pedal this in the states, through the Americans for Prosperity, a group that’s David Koch’s operation, so-called grassroots operation in the states and nationally.

You know, there are a number of entities that all can be traced back to a small group of CEOs and billionaires who are really pushing to weaken unions in this country, and unfortunately they’ve been successful in many places since the 2010 Tea Party election which was, you know, after the outright vilification of President Obama, where you had a situation in which the President comes in in 2009 and this assault on him, on his legitimacy begins, and they turn that assault into, you know, a significant victory in the 2010 midterms, and since then this agenda, Rebecca Friedrichs’ agenda, the agenda of the people who have been funding this effort, has been, really, on steroids.

DESVARIEUX: And this agenda certainly isn’t over. THat’s what a lot of folks in the media are saying. Do you see this battle being over any time soon, and are there things that people should be aware of and be tracking?

GRAVES: Well, I think the Supreme Court vacancy is a huge issue, because you basically have a situation in which George W. Bush was able to put two extreme, corporate conservatives on that court. He joined other Reagan appointees as well as [an] appointee of his father, Clarence Thomas, and those guys have been extremely hostile to workers’ rights. They’ve been extremely friendly to corporations and the corporate agenda. They are weakening our country.

They certainly have weakened it through he terrible and devastating Citizens United decision, and when you have that 5-4 majority, those five guys in that majority just marching forward and destroying precedent after precedent, I think we have a situation [in] which the court has been out of control, and now there’s an opportunity with that vacancy to restore the court’s true place in our society, which is not as this business activist, corporate activist court that’s trying to destroy legal precedents to try to use the First Amendment as a sword to kill longstanding legal precedents that protect all our rights, including our rights in this democracy.

This court, I think, has been out of control, and I think it has engaged in decision-making that is certainly extremely activist and biased, and quite frankly the Roberts court has put its thumb on the scale of justice, on the side of corporations, on the side of the Koch brothers and the Koch brothers’ interests in ways that have had a devastating impact on our country, and now the court is deadlocked. They are not able to do so, at least for now.

DESVARIEUX: All right. Lisa Graves joining us from Madison, Wisconsin. Thank you so much for being with us.

GRAVES: Thank you so much for having me.

Lisa Graves is the Executive Director of the Center for Media and Democracy and publisher of ExposedByCMD.org and PRWatch.org. CMD is a national watchdog group that conducts in-depth investigations into corruption and the undue influence of corporations on media and democracy.