Ladd Everitt: Gun violence in the US is off the charts compared to other countries.

Ladd Everitt: Gun violence in the US is off the charts compared to other countries. 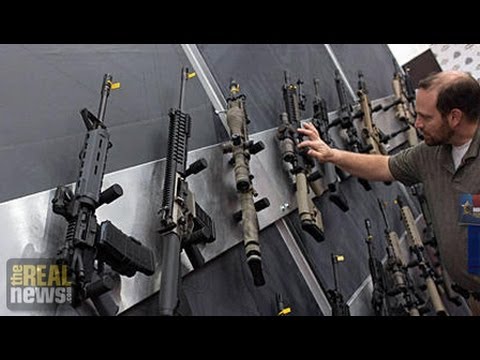 According to a recent study by the American Journal of Medicine, countries with the highest share of gun ownership actually have the highest firearms-related deaths.

Here to discuss the significance of this study is Ladd Everitt. He is the director of communications of the Coalition to Stop Gun Violence.

Thanks for being with us, Ladd.

LADD EVERITT, DIRECTOR OF COMMUNICATIONS, COALITION TO STOP GUN VIOLENCE: Yeah. Thank you for having me.

DESVARIEUX: Can you summarize the findings from The American Journal of Medicine about the relationship between firearm ownership and firearms-related deaths?

EVERITT: Yeah, well, they looked at a number of different states. It was a very far-reaching study, particularly for study this type, and they did find positive correlations in terms of the, you know, level of gun ownerships, less gun ownership in the home and communities, and then in terms of levels of gun homicide and also gun suicide. And that confirmed previous studies that we’ve seen in this area that showed similar findings.

DESVARIEUX: How does gun violence in the U.S. compare what other countries?

EVERITT: It’s astronomically higher, particularly when you compare it to other developed countries and other high-income nations. You know, the pattern typically is the U.S. has a higher overall homicide rate, and then when you look specifically at the gun death rate, our gun death rate is typically astronomically higher than other democracies’ and high-income nations’.

DESVARIEUX: Okay. And 90 percent of Americans actually support background checks for firearms purchases. Who and what are the obstacles to passing gun safety legislation?

But really, you know, this comes down to NRA lobbying in Congress. And, you know, I think we’re all aware right now that we have a congress that is largely dysfunctional. And, of course, we’re talking today on the day that government was shutdown again. And, you know, I think that many people recognize that we have many numbers of members of Congress that are not accurately representing the views of the American public. And I think the gun issue in that way is not different than many others.

And, you know, we had a tough vote in April after the Newtown tragedy, where, you know, we had a very modest piece of legislation up on Capitol Hill that would have expanded background checks but not required them to be universal, and that was defeated by five votes. And that’s a piece of legislation we’re still working on very hard, you know, in state after state across the country to build this the support we need to pass it.

DESVARIEUX: Yeah. And you just mentioned that legislation. But do you actually see Congress revisiting this issue and trying to introduce legislation in the near future?

EVERITT: I do, I do. You know, I think initially Senate Majority Leader Harry Reid and West Virginia Senator Joe Manchin, who’s been such a great champion of this amendment, thought that we could do that early next year. That picture’s a little more negative in forecast right now. They’re having trouble getting on those additional five votes that they need to make this–basically, move this through.

DESVARIEUX: Okay. And what is next for the Coalition to Stop Gun Violence and partner organization? What campaigns are you currently working on to reduce gun violence?

EVERITT: Well, we work on a whole host of campaigns. You know, some of our campaigns are legislatively focused. And we talked of course–you know, we’re talking, of course, now about background checks at the federal level. We also were involved in certain state-level campaigns that have been successful, like the campaigns in Maryland, New Jersey, Colorado, and elsewhere.

We’re also involved in projects that deal with the way the private sector is addressing the problem. So, for example, Starbucks recently was pressured by our group and others, including Moms Demand Action, to change their policy regarding guns, and they are now requesting that people not bring guns in their stores. The next focus of that campaign is Staples.

We also successfully pressured media outlets like NBC and others to drop pro-gun extremists from their programming. So an example of that would be how NBC Sports recently dropped Tony Makris, an NRA consultant, from their program after he shot an elephant in the face and then compared his critics to Hitler. We were also able to pressure the town of Gilbertson, Pennsylvania, to drop their–to basically fire their police chief, a gentleman who had fired fully automatic machine guns in videos and talked about overthrowing our government or basically going to war without government. So, I mean, we have projects in a whole broad range of areas.

I think there’s two levels we’re fighting this. One would be legislatively, of course. But then there’s a whole ‘nother battle regarding social norming around guns and changing what we view as acceptable as a society in terms of gun use and gun ownership.

DESVARIEUX: Okay. Well, thank you so much for joining us.

EVERITT: You bet. Thank you for having me.

Ladd Everitt has served as the Director of Communications of the Coalition to Stop Gun Violence since May 2006. He has served in a volunteer capacity with the D.C. Crisis Response Team, a group which offers comfort, support and referral services to victims and survivors of homicide in the District of Columbia. From 2002-2007, he…