The State Policy Network, a network of conservative thinktanks, has a state-by-state plan to 'defund and defang' public sector unions, reveals The Guardian newspaper. Larry Cohen, former president of CWA and Chair of Our Revolution says this will only strengthen the US oligarchy

The State Policy Network, a network of conservative thinktanks, has a state-by-state plan to 'defund and defang' public sector unions, reveals The Guardian newspaper. Larry Cohen, former president of CWA and Chair of Our Revolution says this will only strengthen the US oligarchy 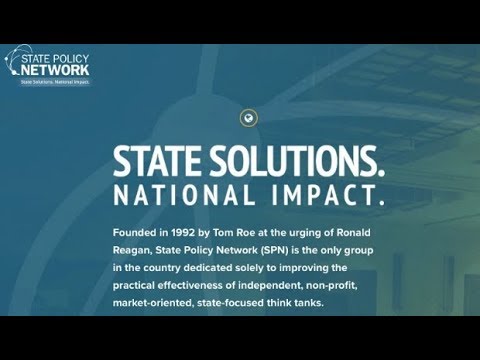 SHARMINI PERIES: It’s the Real News Network. I’m Sharmini Peries coming to you from Baltimore. A little-known but influential network of conservative think tanks is holding its annual meeting this week, according to an article published in the Guardian newspaper. The State Policy Network has developed a plan to defund and defang public sector unions with the aim of weakening progressive candidates’ fundraising abilities. The State Policy Network is 63 conservative state think tank in all 50 U.S. states. The SPN fundraising letter that was sent to supporters in April of last year outlines that they want to raise $8 million, and the plan they have states that, and I am quoting here, “Once-in-a-lifetime chance to reverse the failed policies off the American left. We are primed right now to deliver the mortal blow to permanently break its stronghold on our society.” It states.

Joining us to discuss this recent revelation is Larry Cohen. Larry is former president of the Communication Workers of America and chair of Our Revolution, the group that Bernie Sanders founded last year. Thanks for joining us today, Larry.

SHARMINI PERIES: So, Larry, SPN, its fundraising letter that I mentioned and quoted from in the intro, highlights the success that the republicans had in rolling back public sector unions in Wisconsin back in 2011 under Governor Scott Walker. Remind us what happened in Wisconsin and about the consequences of this type of legislation that’s now taking a strong hold in many states.

LARRY COHEN: Well, as designed, it is destroying the rights of public workers, as you said, in states like Wisconsin, Michigan, Indiana, and earlier this year, in Iowa where bargaining rights were stripped from tens of thousands of public employees there, featured state employees, local government employees. So, their goal is to eliminate collective bargaining everywhere. So the neoliberal agenda is all you need is management and markets. In fact, they want to get rid of the public sector itself, as much as they can. And in the mean time, as you said, they also want to limit the ability of public sector unions to collect dues from their members. Dues that are then used to support collective bargaining as well as progressive legislation. Not actually candidates. Candidate money is raised separately.

SHARMINI PERIES: And, Larry, what is the specific piece of legislation that was so prohibitive for unions in Wisconsin?

LARRY COHEN: Well, the results in Wisconsin were that there was a huge drop in union membership because they stripped away the rights of unions to bargain. And also, membership is totally voluntary even though there’s an obligation to bargain for members and non-members. And on top of that, they forced unions to reapply for their collective bargaining rights and then to enter into regular elections as to whether or not they would be the bargaining agent. And in those elections, a majority of the bargaining unit, not just a majority of those voting, has to vote for the union or the workers have no collective bargaining rights.

So this combination of things has really resulted in a huge drop in the rights of public workers in Wisconsin. And as I said, this year, now in Iowa, previously also in Indiana, Michigan. This is all by design. Because the SPN members, which are these so called think-less tanks, when it comes to workers and think more about management tanks, are everywhere. They’re well funded by groups like the Koch brothers. And their design is to make sure that workers have no rights and that there’s no organized opposition to their agenda. Not just in terms of public workers, but in terms of their entire agenda, to have markets determine everything, to gut the public sector. And that the oligarchy will only get stronger. The management and the billionaires in this country.

SHARMINI PERIES: Right. So you are talking specifically about the Right to Work Legislation, I assume, here.

SHARMINI PERIES: Right. And you mentioned Indiana, Michigan, West Virginia. Is it correct that they are getting a stronghold in terms of the various states that they are trying to work in? And how successful are they?

LARRY COHEN: Well, where they have taken over, meaning the state legislature and the governor, and in states that previously had bargaining rights, that’s what they aim at. So they get a partial victory in states like New Jersey where they had the governor but not the legislature. But they did achieve quite a bit. They get a total running of the table in places like Iowa, Wisconsin, Indiana and even Michigan.

LARRY COHEN: Well, they’re only able to achieve it if people sit back and are passive. So really the key, what we’re saying in Our Revolution, is all working class people, black, brown and white, public and private sector, with a union or without, need to realize that when they destroy bargaining rights, destroy the rights of union members, they then go after eliminating the minimum wage, eliminating all the rights for workers in general. Over time, they’re after getting rid of all over time legislation, they would like to get rid of the 40-hour work week. So working class people need to realize this is not about public sector unions, it’s about attack after attack on workers’ rights. And a program that believes that when the billionaires get even richer, that’s good for the country as a whole.

So for all of us who believe that workers’ rights are essential in defending everything that we believe in, our standard of living, our healthcare, our pensions, you have to stand up and fight back, not wait till they come for you.

SHARMINI PERIES: Right. Now, SPN isn’t the only such conservative group working on a state level for national impact. The other major groups, you know about obviously we’ve talked about in the past with the labor movement is of course, ALEC, the American Legislative Exchange Council. Which was also a major force behind Wisconsin’s public sector union fight in 2011. Now, do progressive forces have anything equal to fighting back ALEC and SPN and such organizations?

SHARMINI PERIES: And who else?

LARRY COHEN: Yeah, I mean, we don’t have billionaire funders. So it’s very hard to match them when it’s about dollars and then the dollars hiring researchers and lobbyists. So the only way to match them is a mass movement. That’s why we started Our Revolution exactly a year ago, and other groups that we collaborate with. But we have to say to people, we need permanent political organizations and groups, whether it’s Our Revolution or allies that aren’t just there for one election or one candidate or one issue, but link these issues together and fight for economic, racial, social environmental justice on an ongoing basis. So we’re not starting over every time there’s another fight.

SHARMINI PERIES: And how much are the unions cognizant of this kind of organizations that are out there? And are they putting resources, time and woman and manpower behind the fight back?

LARRY COHEN: Yes. Most of the unions are doing that. So, we have to concede that workers establish a union to deal with their employer in a workplace. And so they have certain rights in that workplace. So then you have to build the notion of a political movement, particularly one that goes beyond unions on top of that. That’s not automatic, it doesn’t fall from the sky. But I would say we are seeing increased involvement in groups like Our Revolution from organized unions and their members. But that doesn’t come automatically. You have to work at that.

In a similar way, people who work in environmental groups or even civil rights groups, don’t automatically link up with working class people and these working class fights. So the notion of building an overall political movement that puts us on offense, not just defense, remains a struggle in the United States compared to most other nations.

LARRY COHEN: Yes. So actually Our Revolution has been doing that at our founding a year ago. Stopping the TransPacific Partnership with a focus particularly on the 30 or so democrats who are likely to vote for it and moving several of them before the whole thing collapsed, because we had Republican support in the house. Minor, but 30 or 40 republicans plus 170 democrats. And it was clear that President Obama could not pass it, so he let it go. Then Donald Trump put the icing on the cake. But it wasn’t Trump who killed the TPP, it was a mass movement. And that movement did happen. Labor, environmentalists, immigrant rights groups, very united student groups, faith-based groups, very united across the country in opposition and it led to a victory. So yes, we’ve picked up with that same coalition, led by groups like Citizens Freed campaign, Our Revolution, a big chunk of labor. We’ve already had a series of demonstrations about what the “new NAFTA” should look like. And we’re not sitting back.

So in fact, the Labor Day message, which I have just signed off on for Our Revolution, asks people to sign to join. Over 100,000 Our Revolution members have already signed, demanding that the so-called new NAFTA not be yet another corporate trade deal. And saying that yes, I’ll put my name down and I’m ready to fight in my congressional district to demand that my member of Congress not go along with another corporate trade deal. As you said, hundreds of corporate lobbyists are inside the room, and groups like our are on the outside demanding our rights.

SHARMINI PERIES: All right, Larry, I thank you so much for joining us today. And all the best for the Labor Day weekend to you.

LARRY COHEN: Okay. Thank you so much.

Larry Cohen is the board chair of Bernie Sanders’ Our Revolution, and the former president of the Communications Workers of America.