Laura Carlsen, director of the Americas program at the Center for International Policy in Mexico City, says the families of the 43 disappeared students joined teachers in protest of the legislation

Laura Carlsen, director of the Americas program at the Center for International Policy in Mexico City, says the families of the 43 disappeared students joined teachers in protest of the legislation 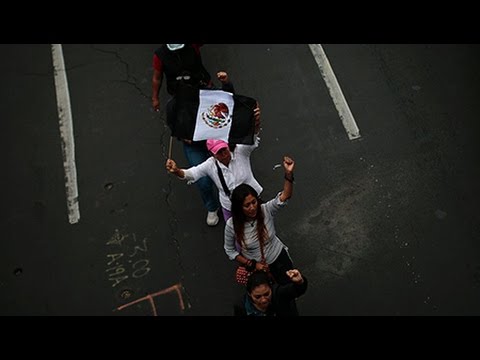 JAISAL NOOR, TRNN: In an update to a story the Real News has been following, striking Mexican teachers in the southern state of Oaxaca say the school year will not begin as scheduled next week if their demands to curb neoliberal education reform are not met. That’s according to Telesur. The striking teachers have been part of tens of thousands of teachers and other working people that have conducted strikes since May. Over a dozen teachers and their supporters have been killed by state violence since June, and the teachers say they are being threatened with further violence.

Now joining us to discuss this again is Laura Carlsen. Laura is the director of the Americas program at the Center for International Policy in Mexico City. She focuses on U.S. policy in Latin America, grassroots movements. Thanks so much for being with us again, Laura.

LAURA CARLSEN: Thank you. Nice to be on the show.

NOOR: So, Laura, talk about why the teachers were so opposed to these reforms. The reforms were just asking the teachers to sit through an evaluation, and these evaluations, we have them in the United States, as well. The goal is to evaluate teacher performance, and the idea is to institute reforms that are going to help teachers be more effective, and ultimately this will help students. Also, are the teachers opposed to any reform at all, any type of evaluation, or are they proposing something else?

CARLSEN: Well, the reforms, the focal part of the reforms became this question of evaluation. And there was sort of a media effort to turn the focus to this as well in the sense that these teachers don’t want to be evaluated because they don’t think they can pass the test. That’s not at all the case.

The problem, first of all, with the evaluation itself is that it’s a standard evaluation that doesn’t take into account that these teachers are working in very diverse conditions, in which oftentimes they don’t have adequate infrastructure. They’re going to classes where there could be no walls, no ceiling, no running water, no bathrooms, where children are hungry, and they have to deal with all this. And so to reach a certain number on a math test or something is really not at all a way to evaluate the kind of work that they’re doing on a daily basis and the kinds of conditions that they’re confronting.

Beyond that, though, is the whole concept of education, in many ways. They’re looking at a teacher as an instrument of imparting knowledge. They’re looking at a teacher as an instrument for achieving certain standards of measuring knowledge within communities and with children. And yet the training, since the revolutionary times in Mexico, and the concept of public education has much more to do with human development. And especially, too, with giving those who have had the least opportunities an opportunity in life. That’s what the normal, what they call the teacher training colleges, the normal schools like Ayotzinapa are all about. They’re communities where–indigenous, poor communities–where students can become teachers, and those teachers go back to the communities.

Now, in these communities the teacher is not just an instrument. The teacher is a human being, and the teacher is also in many circumstances a leader of the community. What this does is to break down that kind of a relationship to deprofessionalize teaching and to change the concept, as well as threatening the concept of public and free education by introducing the aspect of private funding.

NOOR: And so give us an update on what’s been happening on the ground since you’ve last been on. The AP is reporting just on Friday two union leaders were released. Now, they’re still facing charges, including accusations they had set up an illegal financial network to fund protests. You know, because we’ve seen thousands of people protest over the last few months. Over a dozen teachers and their supporters have been killed. Give us the latest, and are there still more being held in prison right now? Talk about the charges they’re facing, as well.

CARLSEN: This is another intense moment in the over three months, and really over two years, of protest by the teachers’ movement.

I want to back up just one second to explain what we mean when we say the teachers’ movement, because there is the [SNTE], which is the national union of education workers, which has historically and structurally had an alliance with the government. And that union is still close to the government, and it is not part of the protest as a whole. It’s a gigantic union. But within that union, which is the S-N-T-E by its Spanish initials, there’s a democratic rank-and-file movement. And that’s called the CNTE, with a C, the association of education workers. And they are, these democratic teachers, are the ones who’ve been spearheading the protest.

So all over the country, really, there’s been a lot of focus on Section 22, or Local 22, in the state of Oaxaca, but there are four states where it’s particularly strong, Guerrero, Chiapas, Oaxaca, and Hidalgo. And there’s also a presence of democratic workers throughout the country that are protesting this educational reform, as well as people throughout the country.

Now, the situation with what they call political prisoners, that is to say, people, leaders of the protest movement who have been arrested in the context of the protest, is that although these two, including the head of Local 22 of Oaxaca, Ruben Nunez, have been released on bail, there are still charges pending. And just the other day, 37 students from the teachers’ training college in the state of Michoacan were arrested.

So there are more arrests. They’re seeing more of a crackdown, it looks to be, at least from these recent cases. And as everything heats up–and the reason everything is heating up is in preparation, because on Monday it’s back to school day. And it’s not at all clear that the teachers will be willing to go back to school unless there’s some progress between now and then on the negotiations with the government.

NOOR: Now, it’s also worth noting, and I think our viewers will also be familiar with the story, that on Monday families and supporters of the 43 disappeared teaching students–they’re often referred to as students, but I think it’s important to note they were teaching students–they marched again in Mexico City demanding answers and accusing the government in the complicity of their death.

Now, this happened back in 2014, but talk about this development. Because now the families of the 43, they are marching in solidarity and with the striking teachers and this broader movement. Talk about why that’s significant, and why teachers are seen as such a threat.

CARLSEN: It’s very significant, because it’s an important statement of solidarity from one of the most important movements in the last couple years in Mexico. As many of the viewers know, the case of the 43 missing students and 6 people killed in and around Ayotzinapa, the students from Ayotzinapa in Iguala, Guerrero, mobilized hundreds of thousands of Mexicans calling for justice in the case, and they still haven’t been found.

So they actually made a political decision in a national assembly to act in solidarity with the teachers. And this is not at all surprising, because, as you mentioned, the students–these were students of a teaching college, precisely the kind of normal center, the teaching colleges that are being threatened. Because part of this education reform also discusses, it doesn’t openly say we will close the teaching colleges, but there’s a complete clash in the ideology, in the way the approach to education between those, and there have been a lot of indications, including defunding and a number of the specific clauses within the education reform that indicate an eventual plan to close down these schools.

That’s why the students in Michoacan were protesting. Ordinarily, students that go to a teaching college, they get out and they have guaranteed positions in their communities because they’ve already gone through this whole process of being trained precisely for that. And so there are vacancies, and they fill those vacancies and become teachers within the communities, generally speaking close to where they’ve grown up and gone to school. Well, that’s one of the things that would be eliminated under the educational reform eventually, and it’s one of the things being protested, that they’re going through this process, and they’re no longer being guaranteed positions to teach.

For Ayotzinapa, then, it’s a question of, first, that this is the issue that they’ve always worked on. This is where their hearts have been, before and after the disappearances. And secondly, they consider the teachers’ strikes as probably the most symbolic and strongest expression of opposition to an entire economic model, which is the neoliberal economic model that we have here today in Mexico. And in this they’re undoubtedly correct. This is also the reason why the Zapatista movement has a declaration out of Chiapas saying that our number one priority is supporting the teachers’ movements as well.

They are managing to do what other movements were unable to do when these neoliberal reforms were passed, which is build up an opposition that’s not, that’s not confined just to the teachers’ sector, or education workers, but has struck a chord with the rest of society, as well. We see it in the solidarity of the Zapatistas, Ayotzinapa, and also particularly in indigenous communities, because they’re the communities that have been most served by the former model, where teachers went in, they gave classes, but they also became leaders in the community and carried out a number of functions that went well outside the classroom, as well.

NOOR: Well, Laura Carlsen, we want to thank you so much for joining us and giving us that update. You know, many of these reforms and many of these issues are being implemented in places like Baltimore and across the United States, so I think, especially teaching–.

CARLSEN: It’s in the Republican platform.

NOOR: Right. And even the Democrats in the United States have been pushing a lot of these similar reforms. So I think it’s especially relevant to people that care about public education and teachers. So thank you so much for joining us. Laura is the director of the Americas program at the Center for International Policy in Mexico City. We appreciate you coming on.

Laura Carlsen is the Director of the Americas Program of the Center for International Policy in Mexico City. She focuses on US policy in Latin America and grassroots movements in the region.