Lina Attalah: From bus drivers to university teachers, workers are striking for economic and political demands

Lina Attalah: From bus drivers to university teachers, workers are striking for economic and political demands 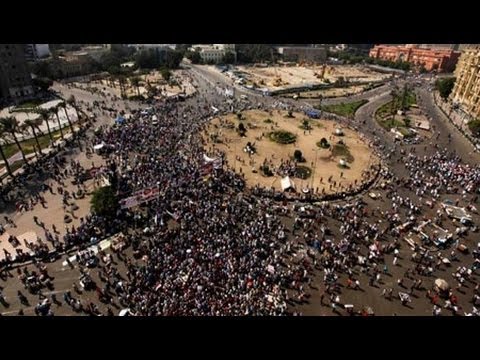 PAUL JAY, SENIOR EDITOR, TRNN: Welcome to The Real News Network. I’m Paul Jay in Washington. And in Egypt, mass protests continue, at the heart of which is a reignited workers movement making economic demands and political demands, the key one being about the role of the military in Egyptian society. Is the Egyptian military planning to have a sort of Mubarakism without Mubarak? Is the Egyptian army planning to take over the presidency in the new Egyptian structure? Now joining us from Egypt, from Cairo, is Lina Attalah. She’s the managing editor of the English edition of Al-Masry Al-Youm. And as I said, she joins us from Cairo. Thanks for joining us, Lina.

JAY: So give us a picture of the protest, the demands, and the current state of politics in Egypt.

ATTALAH: Currently there is a peak in labor unrest in Egypt throughout the nation. And it’s marked by a series of labor protests across sectors. And it doesn’t only include labor, but it also includes professionals. So we have the first nationwide teachers strikes demanding better working conditions and demanding sectorial reforms. We have medics, nationwide strikes. And we also have the more traditional labor strikes. And what marks those strikes currently is the fact that they are coordinated nationwide. So it’s not anymore a strike connected to a particular governorate or a particular institution. There is [incompr.] strikes become completely general and they reach the whole nation. And there is also a change in the level of discourse. So, as opposed to only demanding better working conditions and a series of bonuses and better working packages, both workers and professionals are demanding actual sectors reforms in a way that would also improve the lives of the users of those services, which is the rest of the population.

JAY: I understand one of the big strikes is the bus drivers’, and who have said they may actually go around picking people up but not charge them anything, give people free rides, as part of the strike.

ATTALAH: That already happened in some districts, in some neighborhoods, and that was another very smart tactic in order to win people’s sympathy to those strikes, because also we have to admit that people at large are sort of fed up with the mounting instability and with the fact that nothing came back to normal ever since 25 January, and hence there wasn’t enough sympathy towards those strikes. So what the workers and also the professionals are doing very smartly is they’re trying to line up people’s support to their demands.

JAY: Now, how political are these strikes? There’s economic demands, but are they also making political demands?

ATTALAH: I call that political the moment they called for institutional changes, they called for management changes, especially in sectors where management is highly tied to the toppled regime of Mubarak. They don’t necessarily call for certain constitutional demands like political parties do, but the fact that they are calling for institutional reforms, I think, is a step beyond mere economic demands of better working conditions and better wages and better bonuses.

JAY: Alright. Now, there’s been a lot of debate and conflict over the coming elections about their timing, how parties are going to be organized. Talk a bit about that. And to what extent is there a real, you could say, danger, from many people’s point of view, that the military will actually assume the presidency?

ATTALAH: The main problem now is the lack of information and the lack of clarity of what the roadmap is going to be for the transition, exactly. And in the wake of this lack of information, it becomes a fertile ground for speculations, and also fears, of an imminent military takeover. Reasons why people fear an imminent military takeover is the fact that there hasn’t been any negotiation, any proper negotiation, as far as we know, between political players and the military that would safeguard the military’s position in the country’s political future in a way that wouldn’t harm their economic interests and in a way that would preserve the secrecy that has been looming around this institution for many years. This negotiation [hasn’t] happened, this disagreement hasn’t happened yet, and that makes many of us fear an imminent military takeover. As far as we know, what the military said is that we are going to have parliamentary elections to kick off end of November and to take place in the span of two months. And following that, there will be a [incompre.] of writing a constitution and a referendum for the people to agree or disagree with their constitution. But anyways, there wouldn’t be any presidential elections any time in 2012. And that scares people, because that also means that the military would stay in power for all this duration. And it’s important to note that the military made it very clear that elected parliament is not going to be in any way responsible for appointing a new government. And the current government is subject to the control of [the military]. So we are going to be in a situation where you have an elected body in charge of providing some legitimacy for the revolutions, since it is elected, but the actual executive power will remain in the hands of the military for some times. And that’s quite worrying.

JAY: To what extent are people still being arrested? We hear that people are still being tortured. Are they going after and arresting any of the union leaders or workers involved in these strikes?

ATTALAH: There was a lot of intimidation, the leaders of the labor movement, not the most prominent ones, but the ones based in governorates. There is a case of labor, of workers facing trials [incompr.] the law that was passed by the military that bans all sorts of protests and strikes. More generally, military ties have been continuing. We have an exceptional number of people facing military trials ever since February 11. They amount now to 12,000 people, which is a huge number. And this is again a strong reason for us to be quite worried about the continuation of military rule, not to mention, of course, the intimidation that is also happening to people working in media. So we have, increasingly, bloggers and journalists being summoned for interrogations on the basis that they criticize the military. We have newspapers being confiscated, and television licenses being confiscated as well, such as what happened with Al Jazeera rights? So those are all signs that do not make us feel quite comfortable about [incompr.] the current situation.

JAY: Has there been any direct pressure on your paper?

JAY: Thanks very much for joining us, Lina.