Lina Attalah: Agreement shows US and Egyptian Brotherhood have reached an understanding; President Morsi has consolidated power in alliance with new military leadership

Lina Attalah: Agreement shows US and Egyptian Brotherhood have reached an understanding; President Morsi has consolidated power in alliance with new military leadership 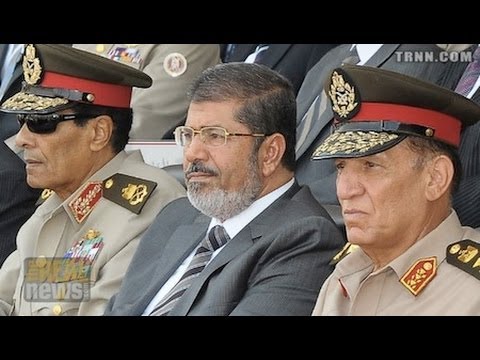 The Wall Street Journal announced on Tuesday that the United States is close to a deal with Egypt, providing about $1 billion of debt relief. There are millions of other dollars that are going to be provided through various loans and guarantees programs, which The Wall Street Journal calls "part of a gilded-charm offensive … Washington hopes will … shore up the country’s economy and prevent its new Islamist leadership from drifting beyond America’s foreign-policy orbit." Well, that’s the real questionâ€”just where is President Morsi when it comes to America? He’s the representative of the Muslim Brotherhood. And what does that mean for Egyptian-American relations?

Now joining us from Cairo to discuss all of this is Lina Attalah. She’s the chief editor of Egypt Independent. Before that, she wrote for Reuters, The Cairo Times, The Daily Star, Christian Science Monitor. And she joins us from Cairo. Thanks for joining us, Lina.

JAY: So talk to us a little bit about President Morsi. Very soon after becoming president, he actually fired General Tantawi, who led the military after the fall of Mubarak. And most people thought that Morsi would have trouble dealing with the military; on the other hand, he fired them. How real was that? And to what extent is Morsi really taking control there?

ATTALAH: I think President Morsi is using a very interesting tactic to reconfigure the incumbent military-civilian relations in Egypt. In a very smart move, he basically sent to retirement an older generation of the army who is known to be traditionally antagonistic to Islamist forces, which has been casting doubt over the possibility of this military class coexisting peacefully with the rule of the brotherhood now that the Islamists are in power. So in a tactical move, Morsi specifically used his powers as the president to retire this older generation and to promote a younger generation within the army, particularly within the Supreme Council of the Armed Forces, which ran the country in the transition following the ouster of Mubarak. And this generation, this younger generation, has left of hostility [sic] towards the rule of the Brothers, and at the same time seems to be happy to be promoted, because the potential of them being promoted were highly circumvented by the older generals within the Supreme Council of the Armed Forces, the likes of Tantawi and Anan.

JAY: And Morsi also fired some heads of state television and one of the state-owned newspapers. He really does seem to be asserting some control here.

ATTALAH: Yes. This is another move altogether. Morsi has also after the media, and it has been extremely personalized. So a lot of the media figures who are facing charges and trials right now are facing such charges for insulting and defaming the president. So it’s quite personalized. And this is raising eyebrows. This is a different case than the military retirement and the new decisions atâ€”mostly at the combat level. And they are threatening decisions, to be honest, because they also seem to reveal how intolerant Morsi’s rule would be to opposition, especially as manifested in critical media.

JAY: Now, why did the military leadership accept this? I know at the time Morsi was elected, some people I talked to in Egypt, they thought Morsi was going to have a sort of symbolic presidency and the real power would be retained by this military leadership. How was he able to move them aside without more of a fight?

ATTALAH: I think what was very tactical about the move is that in fact there have been talks from Morsi’s side with some members of the Supreme Council, but the lesser senior ones, and this provided a backing for Morsi’s decision to retire the elderly. So he did not completely sideline the military institution.

JAY: Before all this, we were talking about the Egyptian military dictatorship. Would one still use that terminology? Has anything changed in terms of the really underlying power of the military?

ATTALAH: We can say that the military institution can no longer be considered completely autonomous from civilian authority. Morsi’s decisions, as I said before, clearly are changing the nature of the dynamics of military-civilian relations in Egypt. The fact that he could send to retirement established and senior figures like Anan and Tantawi and, later, 70 other generals later this week actually is quite significant.

But at the same time, we can’t say that the powers and the privileges of the military institution has been crippled by Morsi’s move. So, for example, no one is talking about the economic privileges granted to the army, which have been steering a lot of debates in Egypt recently, like the tax exemptions, landownership, the free labor. These are things that do not seem to be changing following Morsi’s decisions.

Another major thing is the question of prosecution. There were a lot of flaws on the side ofâ€”there were a lot of blows on the side of the generals during the transition, during the 15-month transition where they were ruling, which saw waves of violence where lots and lots of protesters were killed, and no one has been held accountable. And Morsi does not seem to show any commitment to raise cases against these generals.

So an end to military dictatorship does not seem to be quite the word here, but definitely a change in the nature of the relationship between the military institution and civilian authority.

JAY: Now, in terms of the relationship with the United States, there’s an American trade delegation on its way to Egypt. The U.S. Chamber of Commerce is preparing to send a delegation of some 50 American business leaders to Egypt. The delegation, which is set to include, according to The Wall Street Journal, regional Middle East heads from companies such as Boeing, General Electric, Google, and Citigroup, all working in partnership with the U.S. State Department. The fact that all these company leaders are going, the fact that The Wall Street Journal is doing this, essentially it must be leaked by American authorities that they’re very close to a deal with Morsi, that they’ve decided Morsi can stay within, quote-unquote, the American foreign-policy orbit. Does that seem a correct estimation by the Americans?

ATTALAH: I think the Americans have already established important steps towards the rapprochement with Morsi and his team, and it’s a mutual rapprochement. And I can’t help thinkingâ€”but I can’t help but think that the recent decisions by Morsi towards retiring some of the military generals was not done in conjunction with his U.S. partners. The alliance with the U.S., the Egyptian-U.S. alliance, which is rooted in [É‘ËˆtÉ] regime, I think is still prevalent. It’s manifested in the revived and the reactivated trade relations you just mentioned, and also in political commitments from Morsi towards regional security. And I don’t see in the foreseeable future any change in this relation.

JAY: So that means Morsi must have made a deal on Israel, because there’s no way that America would throw all this money at Morsi if they thought Morsi was going to break the treaty with Israel or fundamentally change that relationship.

ATTALAH: Well, although Morsi has been getting a lot of bad press in Israel about, you know, doubts over the state of the treaty and the possibility and potentials of changing some of its clauses, and the question of rearming and redeploying the Egyptian army in Sinai in Egyptâ€”and in terms of his public discourse, Morsi has been very clear about committing to the peace accords with Israel and committing to regional security, which is at the core and at the heart of this organic relation that ties Egypt with the U.S. There doesn’t seem to be any major changes on that level. And I think the bad press in Israel I refer to is just, I guess, out of propaganda and not real fact. I do not foresee any radical change in terms of security arrangements between Egypt and Israel [crosstalk] Morsi’s rule.

JAY: And how are the secular revolutionaries, the young people and workers and unions that occupied the square and helped bring down Mubarak, how are they reacting to all of this?

ATTALAH: Currently, the condition of the revolutionaries and the workers is one of heightened cynicism towards the rule of the Brotherhood. There are a lot of concerns about the resurrection of the Mubarak-era policies, especially with regards to workers’ rights and media freedoms, and restrictions on the media, because so far we haven’t gotten particularly positive signals from Morsi and his team on these issues. So there are a lot of concerns.

But also there is a lot of regrouping and quests to create new alliances between secular parties, between the centrist parties, ahead of the parliamentary elections, which are supposed to take place a few days after the referendum over the Constitution that should be concluded some time early October. So there are also moves towards coalescing, creating new alliances, especially amongst the parties and the presidential candidates who managed to make some gains in the most recent polls in Egypt.

JAY: And to what extent have there been protests against Morsi and the rule of the Brotherhood?

ATTALAH: We have had scattered protests, particularly by the labor movement, by labor groups, against the government of Morsi for not responding to immediate demands for better working conditions and better living conditions, and these have been scattered.

One week later, another group, more left-leaning, less associated with the military establishment and the Mubarak regime, also took to the street protesting the rule of the Brothers, demanding that the Brothers do not impose any restrictions on freedom of expression and on press freedom. And this was also big enough, and it took place in Tahrir Square.

So the protest movement is starting to pick up, and the Brotherhood will have do deal with some solid opposition if they are not ready to radically change some of the Mubarak-style policies, especially on the socioeconomic level.

JAY: Right. Alright. Well, thanks very much for joining us, Lina. And just to let our viewers know, Lina’s going to be joining us regularly to report on the situation in Egypt. So thanks again, Lina.