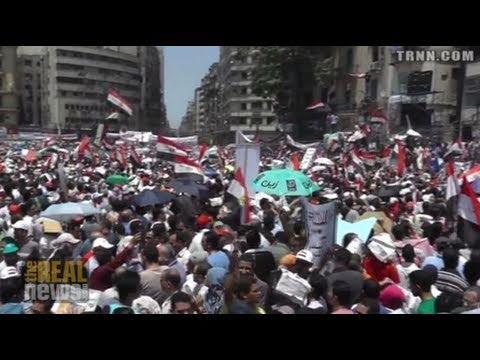 PAUL JAY, SENIOR EDITOR, TRNN: Welcome to The Real News Network. I’m Paul Jay in Washington. Across the world, the struggle over who’s going to pay for the crisis continues, from Greece to Washington, DC, and of course to Cairo, Egypt, where on Friday mass protests broke out again against the new state budget, which puts the burden of paying for the crisis on poor Egyptians. Wealthy Egyptians are not going to be paying any property tax or capital gains tax. And how are the wealthy responding to all of this? Well, apparently, they’re walking their dollars out of the country. According to The Jerusalem Post, perhaps not the most objective source when it comes to Egypt, but at any rate, something over $130 billion a year in capital flight at a time when Egypt desperately needs money in order to make sure people can eat. Now joining us from Cairo is Lina Attalah. She’s managing editor of the English edition of the Egyptian paper Al-Masry Al-Youm. She’s also written for Reuters, The Cairo Times, The Daily Star, and many other papers. Thanks for joining us, Lina.

JAY: So start by telling us what took place in Tahrir Square on Friday and across Egypt. And how is this continuing?

ATTALAH: On Friday there had been plans for protests nationwide and not just in Cairo’s Tahrir Square. So there have been protests elsewhere. And the main function of those protests was basically that the main demands of the revolution have not been yet fulfilled by either the interim government or the Supreme Council of the Armed Forces. Besides the issue of the prosecutions of the regime’s figures and the policemen who are implicated in the killing of protesters on January 25 revolution, there are also a lot of demands, economic demands, with regards to social justice. Social justice has been the main chant and the main slogan and the main theme of this revolution that has in fact united all people across the board to make this revolution happen. And there have been a lot of signs that this demand is far from being fulfilled and committed to by the interim government. Now, the main manifestation of this is the state budget, which has been revised several times, and across the revisions, there hasn’t been any sign of any real commitment to striking social justice.

JAY: Give us some of the examples of some of the most contentious issues. I guess you could start with the issue of taxation. There was some–one of the demands, if I understand it correctly, is there should be at least some kind of capital gains tax, some kind of property tax. And what’s happening with that?

ATTALAH: We have a real problem with the budget, and that is that we have a deficit of over 11 percent, a budget deficit, and the government has been struggling to close this deficit. Now, a very straightforward way of doing it is, obviously, to tax the stock market, is to tax capital gains. However, when there have been talks about possible taxations of this sort, the following day the businessman community started warning that such moves would be to the detriment of the investments atmosphere in the country, in which case it won’t be a good idea to go for that. So it’s another case that shows us the persistence of the power politics of the businessmen community, of the capitalist community in the country over the ruling elites.

JAY: On the other end of the scale, there’s actually no exemption for the lowest-paid workers, which is kind of remarkable.

ATTALAH: Yeah. And not only that, the other way the budget shows a very nonegalitarian attitude towards different citizens, or at least no care about the lower-income communities, is the minimum wage, is the national minimum wage. Now, you might know that there have been for a long time calls to raise the minimum national wage to EGP 1,200 per month, and there has been even a court ruling allocating for such a raise. However, there has been no commitment from the government, from the interim government, to raise that. In fact, in the first budget revision, we had it raised to EGP 600, which is a little less than half of the EGP 1,200, and even in the second revision, the government opted to even lower this national minimum wage to EGP 650, which shows that if they are trying to compromise any group, any segment of society, in order to close this budget deficit, it’s mostly the poorest.

JAY: Now, what about what’s happening on pensions? ‘Cause they had promised some kind of pension reform.

ATTALAH: There have been some resorts to scrapping the annual rates of pensions in order to close the budget deficit, and that’s in another attempt to close the budget deficit. But, again, after a series of protests by pensioners, they decided to go ahead with the–they decided to go ahead with the annual rates of pensions. And that shows how state action is still quite powerful in changing the course of things. But it’s still not enough. It’s–what’s happening is not enough.

JAY: So talk about how successful were the protests on Friday. And how is it continuing?

ATTALAH: The protests on Friday were quite successful, in the sense that there have been a lot of contentions around how badly those protests are affecting the economy. And there have been this urban myth that those protests are basically hurting investments, hurting the economy. So a lot of people were a little cynical to the extent to which people could show up on the streets on July 8, on Friday. However, people opted to actually take to the streets. And there was a little over 50,000 people in Tahrir Square, but then, overall, a little more than 1 million people across the nation taking to the streets that day to demand social justice. One sign of the success of those protests is that they have been extended to an open-ended sit-in until some of the revolution’s demands are met. And we are just hoping that it will be a showcase in the economic decision-making process. Prime Minister Essam Sharaf gave word two days ago that he will be summoning a committee of economic experts in order to study the budget yet again and to see how social justice can be furthered through this budget. Now, I don’t know what this will amount for. We have a real challenge, which is the budget deficit. So I have no idea how those two contentions are going to be balanced, but we will see.

JAY: Now, how serious is the food crisis? We understand it’s always been one of the motivating factors in the revolution, but we understand the situation’s getting worse.

ATTALAH: Basically, we know that there are a lot of food reserves that are waning, that are dropping. And there–and this is also conflicting with the fact that in August starts the month of Ramadan, which is a high month of consumption. And given the facts that reserves are dropping, prices are rising, we do expect a lot more food strikes than we saw in the last few days. It is a huge challenge for the government.

JAY: I’ve read reports that some of the government-owned food reserves, through corruption, are actually being sold for export when they’re supposed to be meant for people’s consumption. Do you know anything about this?

ATTALAH: This is a very common issue. The main problem has been with rice, for example. We don’t have a bad rice production, local rice production, but the problem is that most of it is exported, which is obviously a policy geared towards making money rather than making sure that there is enough rice for people to consume. So it’s a very common thing. But it’s also–it’s beyond food commodities. It’s the same story with gas, for example. We have a huge gasoline crisis, for example, but then most of our gas is being exported at lower price rates than the international market rates to places like Jordan and Israel. So it’s a common policy.

JAY: Now, how much do these, the current government’s policies–essentially, jumping on the austerity train that we’re seeing in Greece and United States and other countries–how much has this got to do with meeting the demands of the, you know, international banking community, the International Monetary Fund, the World Bank? How much is that driving what’s taking place in Egypt?

JAY: And what happened to the $40 billion that was pledged by all these Western governments not long after the revolution? There was this meeting that took place, and they were going to pledge all this money. Is any of that actually showing up?

ATTALAH: The G-8 money. Well, this is also another thing. This money has not been scrapped, has not been rejected by the government. And, in fact, this is the more interesting. An OPEC deal for us, it’s not talked about much, but the only talk we hear is that those grants are very similar to the grants that were made to Eastern European countries in their transitional democracies. And the experiences–the experience with those loans is that they still highly encouraged and interfered in the development of a market-based economy model in those transitions. So I’m not sure the extent to which this will be similar in Egypt, but I’m also not sure this is something that Egypt wants to get into after three decades of crony capitalism being married to corrupt politics and producing a revolution at the end of the day.

JAY: So in terms of the sit-in that’s taking place now, how big is it, and what are the specific demands?

ATTALAH: We have a few thousand people staying in the Tahrir Square now, but we also have no less than 5,000 people taking over the Arbaeen Square in Suez, and also increasingly threatening of blocking the Suez Canal, the number one revenue generator for the country. The main demand is, besides social justice, people demand immediate prosecution of the top of regime figures and all those who have been implicated in killing protesters during the revolution.

JAY: Thanks very much for joining us, Lina.