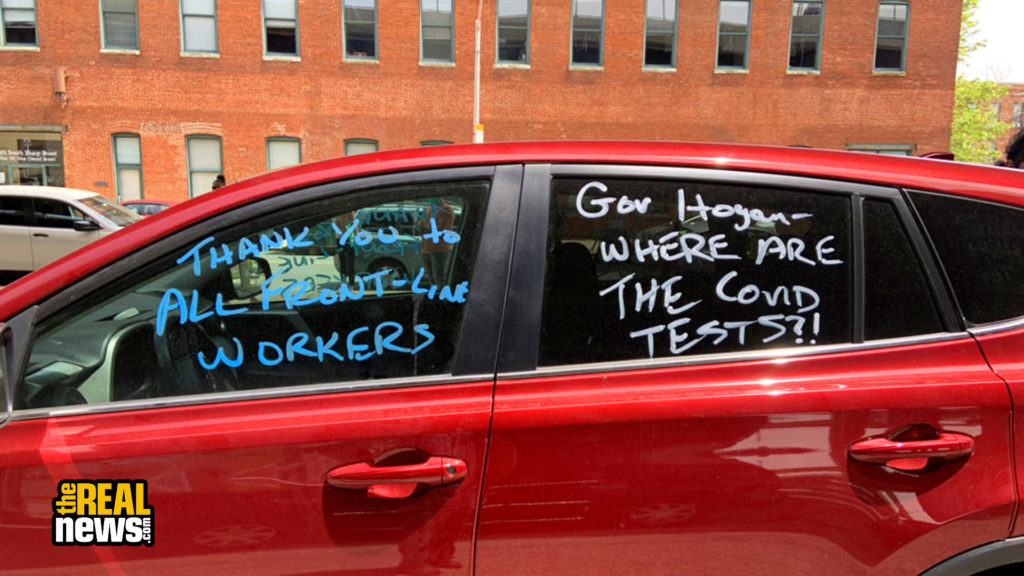 Ashley Watson: There are children who are infected. There are inmates who are dying. There are people who are under his care and custody who are in trouble.

Jaisal Noor: Maryland Governor, Larry Hogan, has earned praise for his response to the COVID-19 outbreak.

Speaker 3: You are one of the governors in America who’s fighting hard to keep your states in a good place when it comes to the coronavirus outbreak.

Ashley Watson: People from the outside are only seeing what CNN and other agencies are broadcasting in the news. But Hogan has not done what he’s supposed to done for this state.

Jaisal Noor: For weeks, members of Maryland’s biggest public sector union have warned of a lack of testing and personal protective equipment. The Maryland affiliate of the American Federation of State, County and Municipal Employees, AFSCME, staged a socially distance car caravan in Baltimore on May 19th to demand more testing in the state’s hospitals, prisons, and juvenile facilities. Ashley Watson, a case manager at a juvenile detention center, says the lack of PPE and safety protocols are putting her co-workers and young people at risk.

Ashley Watson: We don’t have the necessary tools to keep us safe so we’re bringing in the virus at several facilities and giving it to the youth because we’re the only ones coming and going.

Jaisal Noor: The same day of the protest, Hogan announced increased testing across the state, but the union says their workers have yet to get access. One day later he announced all staff and detainees will be tested, but critics say testing inside jails and prisons should have happened weeks ago. Patrick Moran is the president of AFSCME Maryland, which has 25,000 members.

Patrick Moran: 70% of the people that have the virus in the prisons are the employees themselves, so it is clear. There was a 12% uptick in the last week in the prisons alone. He has a moral obligation as an employer to make sure that his own employees are healthy and safe and he’s fallen down on the job.

Jaisal Noor: The union says they have reason to be skeptical of Hogan’s assurances. Hogan was praised in a widely-covered announcement that he had secured 500,000 tests from South Korea on April 20th. A month later, Moran says his members have yet to see the tests. The governor’s office declined to comment for this story. With Cameron Granadino, this is Jaisal Noor, in Baltimore.