Leading expert on marine oil spills, Professor Richard Steiner, who worked on Exxon Valdez spill, says there has never been a spill of this type before and the environmental response was 'utterly lacking'.

Leading expert on marine oil spills, Professor Richard Steiner, who worked on Exxon Valdez spill, says there has never been a spill of this type before and the environmental response was 'utterly lacking'. 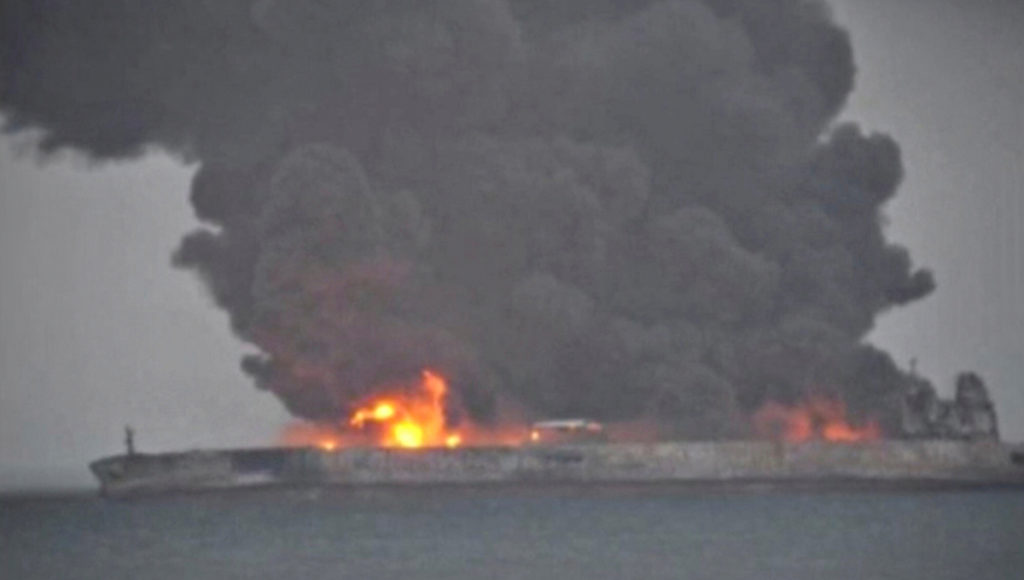 D. LASCARIS: This is Dimitri Lascaris reporting for The Real News Network from Montreal, Quebec. The oil spill in the East China Sea has become the second biggest marine oil spill, surpassed only by the BP Deep Water Horizon spill in the Gulf of Mexico. A Panamanian tanker called the Sanchi was carrying almost a million barrels of Iranian oil condensate when it collided with a Chinese cargo ship in the East China Sea on January 6th. After burning for more than a week, it sank, spewing more oil into the surrounding ocean. The 32 crew members of the Sanchi are missing and presumed dead, and the spill is still expanding. Last week it was to be over 40 square miles in diameter, or the size of Paris, France. A few days later it was reportedly two to three times that size.

Is this disaster just a blip in the ocean or, as some scientists are warning, could this have a massive impact on millions of fish and other marine life being contaminated by carcinogens? With us to discuss this and other ways in which fossil fuels are impacting marine ecosystems, I’m pleased to be joined today from Anchorage, Alaska by Professor Richard Steiner, a marine conservation biologist and oil spill environmental specialist. Professor Steiner advises governments, United Nations NGOs on offshore energy and environment issues globally. Welcome, Professor Steiner.

RICHARD STEINER: Thank you, Dimitri. Glad to be with you.

D. LASCARIS: Please start by discussing the potential effects of this oil spill in the East China Sea on the local ecosystems.

RICHARD STEINER: Well, all these major marine oil spills are different. Each one is unique. This one is extraordinarily so. We have never seen a major release of natural gas condensate as large as this in the marine system. This is by far and away the largest condensate release in history. It burns, evaporates, and dissolves in the water, and the component that dissolves in the water column is what I’m most concerned about. This is acutely toxic, it’s very volatile, and as it spreads with water currents it exposes all marine organisms in its path. They can be killed quickly, or they can suffer sub-lethal ecological harm, such as respiratory impairment, reproductive impairment, long-term physiological damage. All sorts of things can happen short of being killed.

So this is acutely toxic stuff, and again, we’ve never seen a major marine spill of condensate like this, so we have to be very honest about what we don’t know and what we do know, and there’s a lot we don’t know about this.

D. LASCARIS: Quite concerning comments that raise the question: just how rich are the surrounding waters in terms of marine life, and what types of marine life predominate in those waters?

RICHARD STEINER: The East China Sea is a heavily polluted, degraded coastal ecosystem, no question about it, from all the pollutants coming in from the river systems in China, and particularly the Yangtze. However, it is still a very productive marine ecosystem, and offshore there’s over 200 species of fish and shellfish that are harvested commercially for the local and international market. This includes mackerel and pomfret, scad, croaker, cuttlefish, squid, shrimp, crab. I mean, it’s a very productive fishery offshore where this incident occurred. Plus there’s a very robust plankton community. Sea birds and many marine mammal species, including humpback whales, minke whales, fin whales, killer whales, Bryde’s whales, porpoises. It’s a productive offshore ecosystem.

Humans often tend to focus more on what oil comes to shore, because we are terrestrial primates, and we tend to focus on damage we can see, but in these sorts of instances, the damage is offshore in the pelagic ecosystem, and people tend to think, “Well, I don’t see it, so what’s the big deal?” In reality, there is still extensive damage offshore in the pelagic, the offshore marine ecosystem, but it’s just not as visible to people on shore. So the damage has been caused. It’s there. It’s certainly serious. Whenever you spill tens of thousands of tons of an acutely toxic chemical into a productive offshore marine ecosystem, you expect serious damage, and I’m sure we had it here.

D. LASCARIS: How do the particular qualities, physical properties of condensate affect the ability of crews to clean up this spill?

RICHARD STEINER: That’s an excellent question, Dimitri. It’s very different. I mean, there’s a lot we don’t know about condensate, but what we do know is that it behaves very differently when it is released. It does not form a distinct surface slick like crude oil or heavy fuel oil does. It burns, evaporates, and dissolves, because it’s so light and volatile. So you can’t really contain it and recover it like you can crude oil. The slicks that were reported on the surface around the disaster were the fuel oil from the tanker, not the condensate. And even those, one day the State Oceanic Administration reported they covered about 330 square kilometers of sea surface, and then the next day, when a storm blew in, they reported they could find none. Obviously, it had dispersed into the water column.

But that’s just fuel oil, and that was only about a thousand tons that was left on the tanker at the time of the collision. The condensate was over 113,000 tons, and that was an enormous amount of pollutant that went into the water and into the air as well. So that’s by far and away the largest concern we have.

D. LASCARIS: Studies are coming out, I understand, relating to BP Deep Horizon spill in the Gulf of Mexico, which have identified dead zones. Is that something that we may experience in this particular case?

RICHARD STEINER: Well, there certainly was a dead zone in the subsurface hydrocarbon plume that dispersed away from the release site, the drifting tanker, in that week that it was on the surface. I suspect most of the condensate cargo came off in that week, or immediately after it sank as well. That plume, that underwater plume that drifted away with water currents … and the water currents are quite robust offshore there. The tanker drifted about a hundred miles south before it sank, so we know this is a dynamic offshore ecosystem. And so the underwater plume spread over hundreds of square miles of the East China Sea.

Many of the marine organisms that were exposed to that acutely toxic underwater plume were certainly killed. Others suffered sub-lethal injury. I don’t think, because it’s a well-mixed offshore ecosystem, you’ll experience a persistent dead zone, but again, there’s a lot we don’t know about condensate spills, which is why it would have been fantastic to get a rapid environmental assessment mounted offshore on day two. I will mention that on day two, the day after this collision, I was in immediate contact with the government of China and the government of Japan shortly thereafter, urging them to put a rapid environmental assessment program offshore with water quality, air quality sampling, biological monitoring, and carcass collection, and they simply weren’t able to do that. They decided not to do that immediately.

So a lot of that immediate information, we lost. So there’s a lot about the environmental impact of this we’ll just simply never know. We’ll just have to speculate. But we do know it was serious, and it should have been avoided.

D. LASCARIS: What more can and should be done in order to minimize the risks of the catastrophic spills we’re seeing in the East China Sea?

RICHARD STEINER: Yeah, that’s the critical thing here. That’s an excellent question. Once the collision occurred and the oil is out, the battle has really been lost on these particular incidents, but what we can do is do everything humanly possible to prevent a repeat. And that’s absolutely what the governments of China, Japan, and South Korea need to collaborate on immediately in this heavy vessel traffic area of the East China Sea and Yellow Sea region, and that is conduct a vessel traffic risk assessment to identify these potentially hazardous crossing areas. They need to set up traffic separation schemes to prevent some of this, to reduce the risk of this. Potentially tug escorts, positive vessel traffic control, better pilotage, better aids to navigation, and also better response protocols.

They responded pretty well to this with firefighting and search and rescue, but unfortunately, neither of those had a positive outcome. But their environmental response was utterly lacking, and I think they know that. But all we can really do now is prevent a repeat, and that’s exactly what they need to do. We need to see some leadership by one of the governments there and/or the United Nations and/or an intervenor government to help make this happen.

D. LASCARIS: This has been Dimitri Lascaris, speaking to Professor Richard Steiner, marine conservation biologist and oil spill environmental specialist, about a catastrophic oil spill in the East China Sea. Thank you very much for joining us today, Professor Steiner.

RICHARD STEINER: My pleasure. Thanks.

D. LASCARIS: And this Dimitri Lascaris for The Real News Network.