The Unseen Battle For Raqqa

As Raqqa continues to be liberated from ISIS, Syrian Democratic Forces are working with local tribes to help give them direct control over their futures, says journalist Karlos Zurutuza

As Raqqa continues to be liberated from ISIS, Syrian Democratic Forces are working with local tribes to help give them direct control over their futures, says journalist Karlos Zurutuza

The Struggle for Syria 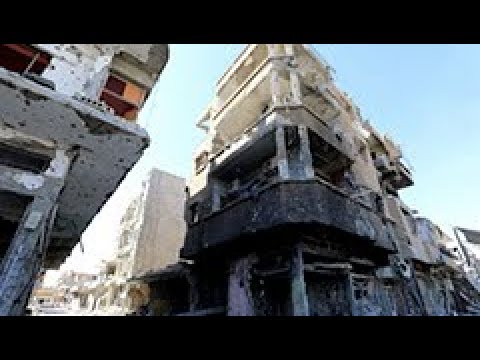 SHARMINI PERIES: It’s the Real News Network. I’m Sharmini Peries, coming to you from Baltimore. As the battle for Raqqa in northern Syria rages on, some coverage has been given to the fierce battle and bombardment that has occurred as a part of the operations against ISIS, also known as Daesh. However, we’ve seen little coverage of 50% of Raqqa that has since been liberated, and largely by the Syrian Democratic Forces with U.S. military support.

Now joining us to discuss what he has learned while in Syria is Karlos Zurutuza. Karlos is a freelance reporter covering human rights and conflict across the Middle East and northern Africa. He has just returned from Syria and is speaking to us from Basque Country, Spain. Welcome, Karlos.

SHARMINI PERIES: Karlos, can you start by describing to us who the Syrian Democratic Forces are and why they are aligned with the U.S.?

KARLOS ZURUTUZA: Well, the Syrian Democratic Forces were founded, as such, in October, 2015. And it’s a combined group formed mainly by Kurds, Arabs, Syrians, Turkmen, and basically all the communities in the northeastern part of Syria. They are backed by the U.S., among other issues, because they have proved as the only reliable force to tackle ISIS on the ground.

SHARMINI PERIES: And give us a sense of why you went there, and why you felt that this was the place to go of all places in Syria.

KARLOS ZURUTUZA: Well, I’ve been traveling to the region, to the northeast of Syria, over the last years and Raqqa was of course something I wanted to see by myself. But I truly believe that the big stories is behind these lines. Of course, there’s front line. The battle against Daesh is important. It’s very relevant. But little is being said about the political project these communities are enforcing on the ground, and I wanted to report on that.

SHARMINI PERIES: All right. It is often repeated, especially in the Western media, that Syrian Kurds are trying to carve out a state for their own governance in the region. What can you tell us about their actual objectives both in Raqqa and of course in Syria as a whole?

KARLOS ZURUTUZA: Well, that’s factually wrong. The Syrian Kurds from the very beginning they said they didn’t want to break up Syria. They want to remain within the Syrian boundaries. But what they want is what they call democratic confederalism system. They’re looking for federal region where they can live in, in Syria.

SHARMINI PERIES: Right. And tell us about the objectives of, say, PYD and other groups like SDF. What are they hoping to achieve in the battles that they are fighting?

KARLOS ZURUTUZA: Well, basically what they say is that they’re fighting for democracy, for a democratic state. Originally the group was led by the Kurds. But now as you go to Raqqa, I mean, more and more Arabs are joining. I’ve been speaking to Arabs over the last weeks, and most of them were telling us, “Well, yeah, the Kurds help us liberate our cities from Daesh, but now it’s us who are going to rule our cities, our areas.” So what we see here is a very big talk between Arabs and Kurds and the rest of the communities on the ground for a future coming. Basically they want to build the federal region where they can all live together and where their rights are granted.

SHARMINI PERIES: Right. Give us a sense of in the city of Raqqa, how our residents responding to the presence of the Kurds? I know you just said that they feel that the Kurds liberated them. But is this a norm? People feeling that they can embrace the Kurds because they had helped them in liberating them from Daesh?

KARLOS ZURUTUZA: Well, they have faced the Daesh for the last four years. If one goes to the headquarters of this operation, it’s easy to realize that the majority of the people there right now are Arabs. You have a lot of young people joining the ranks of the SDF, local Arabs. It’s been them who’ve asked for, to fight in the very front line. It’s a political move and a very symbolic gesture because it’s them who want to liberate the city, and it’s them who want to rule it afterwards. So we have these youngsters fighting on the ground, Arabs alongside the Kurds, of course. But you also have the tribal leaders. I mean, the big men in the area, the big Arab men who are also joining with the so-called Raqqa Council, which is some kind of interim government of Raqqa.

SHARMINI PERIES: All right. Karlos, we rarely get to speak to somebody who’s been on the ground, specially speaking to people that are fighting. What do you think are the most important aspect of what is going on in northern Syria that is not getting covered properly by the international press?

KARLOS ZURUTUZA: Well, when you’re there, everybody talks about the revolution. What they mean by revolution is that it’s probably the first time in the recent history of the Middle East for the whole region, of course, where people have a chance to live in a democratic system. Something which didn’t happen with Assad. Something, of course, which was not granted by, obviously, by Daesh. If you look at the powers in the region, if you look at Turkey, if you look at Syria, Iran, and Iraq, you will find out that what’s going on now in northern Syria, it’s an experiment. It’s a political experiment, which according to them and to many other people can reshape the future not only of Syria but of the whole Middle East region. That’s what they are looking for.

SHARMINI PERIES: And while you were there, you were also able to interview some of the Kurdish leaders. And I think what we’re gonna do is make that our next segment of our interview. So let’s bid you for now, and then we’ll have you join us in a few minutes. Thank you so much, Karlos, for joining us today and for giving us your insights.