Dr. Keeanga-Yamahtta Taylor: If Dr. King Was Alive Today He Would Be In The Streets Holding Leaders Accountable

Dr. Keeanga-Yamahtta Taylor: If Dr. King Was Alive Today He Would Be In The Streets Holding Leaders Accountable 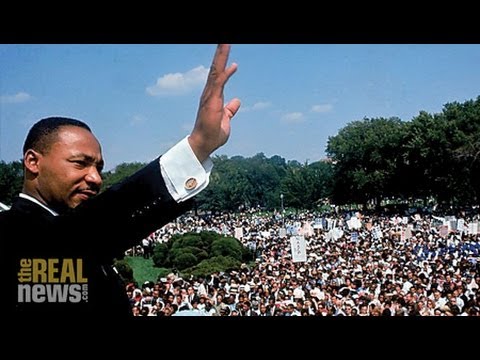 OSCAR LEÓN, TRNN PRODUCER: On August 28, 1963, a quarter of a million people took part in the March on Washington for Jobs and Freedom, a key moment in the civil rights movement. This past weekend, tens of thousands of people rallied at the National Mall to commemorate the 50th anniversary of the ’63 march.

DR. KEEANGA-YAMAHTTA TAYLOR, WRITER AND ACTIVIST: I came for several reasons. I think that, you know, even with the black president in the fifth year of his presidency, that really the conditions in African-American communities across the country have really become almost intolerable. I come from Chicago, where, you know, the mayor in the last few months has closed 54 schools in predominantly black neighborhoods. We have issues of gun violence, issues of poverty, unemployment. And so there really is the need for the rebuilding of a movement that can take on these issues in a way that really have not been addressed since the black freedom struggles of the 1960s.

And so I really came here to try to connect with other activists, other grassroots networks of people who are doing this work in different localities around the city, but for whom that there needs to begin to be some sort of national knitting together of these networks that is different from, really, the leadership that has called this march in the first place, which all too often is a lot more interested in their proximity to people in the White House and not rocking the boat than really building the kind of movement that we need to address these very deep and substantive issues that are affecting black people across this country.

JAISAL NOOR, TRNN PRODUCER: And why is it important for the leadership of this march to take that on? Because, you know, I heard a lot of the speeches in the beginning, and they were talking about mass incarceration and public education and deportations. I don’t think anyone’s really blaming–putting all the blame on President Obama.

NOOR: But talk about why it’s important to hold leaders’ feet to the fire when it comes to these issues.

TAYLOR: Yeah. I mean, I don’t think anyone, you know, could say that the conditions that exist currently in black communities are the sole fault of Obama. I mean, it is true that there is this Congress that is filled with Republicans who would rather die than to allow him to get any piece of legislation through concerning anything.

At the same time, we also can’t act as if Obama or the unprecedented number of black elected officials in this country are just passive passengers on the train of, you know, society, that they actually have the power and ability to shape policy and to advocate for things. So when Obama says that, you know, he won’t champion any specific programs that are targeting the specific problems in black communities, then it really is a denial of the institutional nature of racism in this country.

When Al Sharpton says that, you know, we shouldn’t ask Barack Obama to have a black agenda is basically to deny the institutionality of racism in this country. And to say that we need more than just good will and good intentions–. We actually have to have jobs programs. We actually have to fight for public budgets that keep public housing, public schools, public services open and available to people who need those services because of discrimination that exists in the workplace, because of discrimination that exists in they real economy.

This first march was called in 1963 against racism and economic deprivation. Those are the two remaining defining features and characteristics of black life in this country. And it means, just as it meant in the 1960s, that we have to have programs that actually overcome the racism that is endemic in the way that the economy functions.

NOOR: So a lot of the people I spoke to today, a lot of African-American people, a lot of older African-American people that were around for the first march, you know, they aren’t willing to be critical of Obama, ’cause they say, you know, the Republicans are largely at fault for our current economic crisis and that a Republican would be–their policies would be much worse. What’s your response to people that say that?

TAYLOR: Well, I think that there are two things. One is that I think that the idea that any substantive political change that will really lead to the betterment of, you know, blacks and Latinos and other oppressed people in this country is not going to singularly come out of Congress or out of the halls of Washington. I think that history is fairly clear that the way that people have won reforms and won programs that have had the real impact in the communities has come through social struggle, has come through political activism. And as, you know, Howard Zinn was fond of saying, it’s not who’s sitting in the White House, it’s who’s sitting in. And so that is absolutely true.

At the same time, I think that we have to hold political leaders accountable. When they come around and tell us that every election cycle is the most important election, you know, of our lifetime and we have to get in whatever Democrat because some Republican is lurking in the shadows to do untold damage, we have to actually hold people accountable and demand, you know, that we actually get something for our votes and for our, you know, efforts in advocating for these political parties. And to not do so is to really not take yourself seriously, you know, is to basically play along with the game of having politicians parade into our communities every two, four, and six years who make all sorts of promises, don’t keep them, and then come back through where the only promise is we’re not as bad as a Republican. That’s not enough.

You know, given the scale of poverty, unemployment, police violence, we actually need more than empty promises. We need actual programs. We need money and funding for our cities. And that is something that we’re going to have to fight for and demand.

I believe that if we know anything about Martin Luther King, it’s that he understood that the heart of the civil rights movement was in the streets, was not in the halls of Washington, D.C., and that you had to fight to struggle to get anything that was actually going to make people’s lives better. So I think that he would be in the streets with us. He would be in the streets demanding, you know, more of this administration, demanding to keep our schools open, public housing, and all the rest of it.

NOOR: Thank you so much.