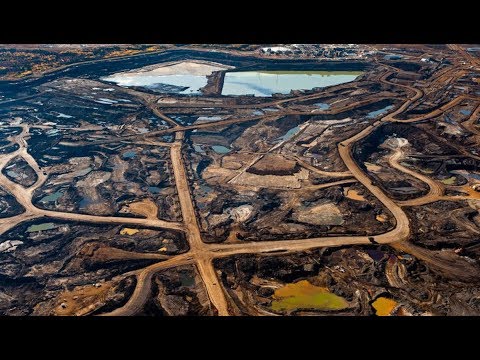 JAISAL NOOR: Welcome to The Real News Network, I’m Jaisal Noor in Baltimore. The world’s eighth largest bank has taken one of the most aggressive steps to date to fight climate change. BNP Paribas says it will stop financing tar sands projects, considered the dirtiest way to extract fossil fuels. This follows last week’s news that oil and gas pipeline giant, TransCanada, canceled a massive expansion of the Energy East pipeline that would carry Albert tar sands across Canada.

Meanwhile, advocates are calling for other big banks to follow suit including JP Morgan Chase, the top U.S. funder of tar sands oil. Now joining us to discuss all of this is Keith Stewart. He’s the head of Greenpeace, Canada’s climate and energy campaign. Welcome back to The Real News, Keith, and thank you so much for joining us.

KEITH STEWART: Great to be here.

JAISAL NOOR: So talk about what you make of this latest news. What’s behind the decision?

KEITH STEWART: So this is big just because BNP Paribas is such a large bank. Eighth largest bank in the world. Previously we’ve seen another major European Bank, ING, come out saying, they would not fund tar sands pipelines. We have here in Canada our largest credit union, Desjardins is looking at making the same step, although they haven’t made a final decision yet.

But BNP Paribas went even further, they said, not only we’re not going to fund those pipelines, which is one of the things Greenpeace has been really focused on because they are the things that enable the expansion of the tar sands. They’ve also said they’re going to get out of fine funding companies that get more than 30% of their revenue from tar sands, from shale oil and gas and they’re also not going to finance any arctic oil explorations. So those are big steps and this is a sign that I think the finance sector’s recognizing that, getting behind renewable energy, getting out of fossil fuels is not just the right thing to do, it’s also the smart thing to do.

Banks don’t take these kinds of steps if they think they’re going to lose a lot of money, I think BNP Paribas is looking, you know if we say here in Canada, they’re looking to where the puck is going, not where it is right now. And they’re saying, that’s where the future is and that’s something we’ve been saying to all the other banks. We, you know, Greenpeace we’ve written to I think about 27, 28 banks about this. We’re in conversation with a number of them. And we’re being listened to in a way that we wouldn’t have been five years ago, where we would’ve been laughed off.

JAISAL NOOR: Now, what kind of impact is this gonna have on current and future tar sands projects because we know, like for example, with the Dakota Access Pipeline Project, there was a whole web of banks and other financial intuitions like Goldman Sachs, Bank of America, that were all lending that project money. So is this gonna have a tangible impact anytime soon?

KEITH STEWART: I think so. I mean, I think the Dakota Access conflict there was a real wake up call for a lot of these banks. And there’s sort of a big push on the people who were financing it. And they were like, oh, because pipelines used to be basically boring and safe. They didn’t make a lot of money but they were steady, there was no real controversy, now that’s no longer true and I think we’re seeing it’s about protecting water, about protecting livelihoods and also about fighting climate change. So I think a lot of the banks are taking a second look at these types of projects, recognizing that there’s risk there that they didn’t see before. And that socially, environmentally these are bad bets and increasingly financially they’re a risky bet. So we’ve identified the 25 top funders of tar sands pipelines in North America, we’re talking to all of them. A lot of them, well some of them pulled out actually, they pulled their money out of Dakota Access after they saw what was happening there.

Some of them we’re working on really hard to get to pull out of the Kinder Morgan pipeline, the Keystone Excel, the Enbridge Line 3, which sort of goes through Manitoba and Saskatchewan here in Canada. And we just saw, as you mentioned, the cancellation of Energy E, which would have been the largest of all of these pipelines, over a million barrels per day. And the company has just decided, you know, they’re taking it off the books. They knew that there isn’t gonna be oil to fill that pipeline, there’s no longer the demand for that oil, there’s no market for it. And that’s the direction the economy is going and that’s a good sign. The only problem right now is it’s not happening fast enough.

JAISAL NOOR: And talk a little bit about tar sands themselves. I’ve mentioned how it’s the dirtiest way to extract energy. What kind of impact does this have on the environment, the community surrounding it, and many native populations that live in those regions?

KEITH STEWART: The difference between tar sands, some people call them oil sands and conventional oil, conventional oil you drill down into the ground and, you know, there’s liquid down there and you pump it up. In tar sands, it’s actually, you have to melt it out of the ground, it’s a solid. It’s sort of mixed up with sand and with clay and so it takes an enormous, imagine how much energy it takes to melt, it’s got the consistency of peanut butter. So imagine having to melt peanut butter to get it to flow and to pull it out and then you have to do extra processing. That means using a whole bunch of water, because you use water basically and steam to melt the stuff. That water is contaminated, there’s now the second largest dam in the entire world after the Three Gorges Dam in China is in northern Alberta, it’s made out of dirt and it’s holding back massive lake of toxic waste.

Some of that leaks, we’re seeing impacts downstream on the water, you also have a lot of air pollution and you have particularly, you know Canada we call them First Nations communities, indigenous communities, downstream, downwind who are worried about the health impacts and they’re seeing increase incidents of certain types of rare cancer associated with petroleum products.

But also along the pipeline routes, people are really worried about spills. Because again, this isn’t regular oil. If you’re pumping, it’s called bitumen, so diluted bitumen. They actually have to like add really light oils to it to get it liquid enough to flow. If that leaks, it doesn’t behave like normal oil does. We saw in the massive spill that happened in Michigan in 2010. What happens is, the light parts evaporate off very quickly, which is bad for the breathing of anyone around. But the other parts, they’ll sink to the bottom and then they mix again with the soil and it’s really hard to get out. You can’t just skim it off the top, it actually like sinks down into the water, stays there, contaminating the rivers.

And so in BC, where the Kinder Morgan pipeline is, salmon is a major part of the economy. If one of these pipelines spills into a salmon stream, you’re not gonna be able to clean up and that’s where the salmon spawn. You know, if they’re laying eggs in contaminated soil, that’s not good for salmon. That’s not good for livelihood. You’ve got 14,000 jobs in British Columbia on our west coast, which depend on basically clean water, healthy ecosystem, fisheries, forestry, ecotourism. And you know, if you’re talking about creating 50 jobs for a pipeline that goes through, that’s not a great risk benefit calculus there. So they’re saying, well, let’s actually invest in renewable energy. Let’s invest in energy efficiency rather than expansion of these very dirty fossil fuels because the more … We used up all the, the easiest to get out oil first, increasingly now it’s coming from the tar sands, it’s coming from fracking, which also has a whole bunch of problems around water contamination.

You know, we need to get away from these extreme fossil fuels, going to the Arctic to drill and move towards that renewable energy economy. And that’s why, you know, one of the reasons tar sands is taking a big hit since the price of oil dropped in 2014, we’ve seen 2 million barrels per day worth of projects get canceled or put on hold. You know, that’s how much oil Canada used in a day. That’s a massive amount of oil and that’s because this is high carbon, it’s also really high cost. It costs a lot of energy to get this stuff out of the ground and then the extra processing required. So you know, this is the stuff that really needs to stay in the ground to fight climate change and it’s also one of the biggest threats to water quality, which everyone cares about. You know that if your water’s contaminated, you’re in big trouble.

JAISAL NOOR: Alright, Keith Stewart, thank you so much for joining us. And hopefully this is just the beginning of much more good news on this front because as we know, there’s wildfires in Canada. Puerto Rico’s still recovering from, and Houston and Central America and Florida are still recovering from hurricanes, so this is more urgent than ever that action takes place. So we hope to have you on again soon with some more good news. Thank you so much for joining us.

KEITH STEWART: Thanks so much for having me on.

Keith Stewart is the coordinator of Greenpeace Canada’s climate and energy campaign, as well as a part-time faculty member at the University of Toronto where he teaches a course on Energy Policy and the Environment. He has worked as an energy policy analyst and advocate for the last 15 years, including on successful campaigns to…