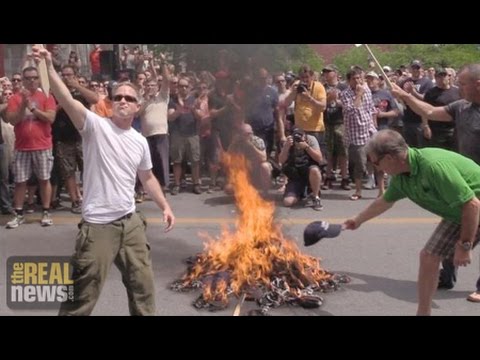 In news out of Canada, hundreds of city employees staged anti-austerity rallies in Montreal and Quebec city. They are targeting a proposed pension reform plan which would raise worker contributions in order to help bridge a $4 billion budget deficit. These demonstrations follow Monday’s rally inside Montreal’s city hall. Eighty firefighters retired in order to protect their pension plans from being potentially affected by the proposed bill, and a hundred city cops called in sick as a form of protest. The images out of this protest have been quite interesting. Cops and firemen have been dressing up in all types of costumes to bring attention to their cause.

Now joining us to unpack this bill are our two guests.

Kevin Skerrett joins us from Ottawa. He’s a former employee of the Canadian Union of Public Employees, otherwise known as CUPE. While there, he worked as a senior research officer focused on pension issues.

And also joining us from Montreal is Michel Lizée. He’s a political economist who advised labor organizations on pension plans in Quebec.

DESVARIEUX: So, Kevin, let’s start off with you. CUPE is Canada’s largest union of public employees, with more than 620,000 members across Canada. Why are workers so upset about this proposed pension reform?

SKERRETT: Well, what I can say about it is that this, what’s happening in Montreal, what’s happening in Quebec, is sort of the most recent dramatic example of something that’s been happening across Canada over recent years. And what it is is a very serious attack on one of the fundamental elements of workers’ compensation in the municipal sector.

I’m a pension researcher for CUPE. (And just to be clear, I’m actually on a leave of absence; I am going back to my work at CUPE.) And in that role, I have involvement in collective bargaining and negotiations–very tuned in to what’s happening not just in the municipal sector across Canada, but in the broader public sector. And these attacks are coming sort of fast and furious in recent years. They’re coming from employers individually, and they’re also coming at the level of government. And what we’re seeing here in Quebec is the provincial government as a whole targeting an entire sector and the pension arrangements in that sector for major cuts and, I think, significantly–and Michel will speak about this more knowledgeably–really cutting into the basic integrity and security of the pension arrangements that have been in place.

DESVARIEUX: Okay. And, Michel, can you speak to the specifics here? What are we talking about when we’re talking about attacks, major cuts? Give us an example.

LIZÉE: Well, the act has many dimensions that we have to understand. But basically, in Quebec, pension plans are usually set up on a city-by-city basis and they are defined benefit plans. So accrued benefits are protected by a law. Once they have been acquired, they cannot be reduced, and once you’ve retired, your pension is secure. Well, in fact, all this goes away with the pension plan.

And one might say that the real purpose of the pension plan is less to reduce pension deficits as it is to systematically reduce compensation level in municipalities. So it’s really an overall attack.

It covers several points. (A) The act will apply to all pension plans, even those that are in surplus. Two, all employees from now on have to assume 50 percent of the cost of the plan on a going basis, but also the deficits, both past deficits and future ones. Any automatic cost of adjustment is canceled. So there will be no longer automatic indexing to the cost of living, which means that retiree will feel an erosion of their purchasing power. And most significantly, a ceiling has been put on how much the pension plan can be worth. In other words, it is blocked at 16.3 percent for the outside and the inside workers, and 18.2 percent for firemen and policemen. So if a pension plan is currently at 24 percent, then they have to take out 8 percent of the benefits to take it down to 16. And then, for the past, they will take the existing deficit, and the first measure is retirees lose their indexing to the cost of living, even if it’s worth more than the actual deficit–doesn’t matter. They will lose it all. And the excess saving will go into a reserve to protect against future deficits.

DESVARIEUX: So, Michel–sorry. There were just a lot of economic terms there and you getting into specifics, but I just want to make sure I’m understanding you right. So does this mean that the risk is then going to be transferred from employers to employees? And is this unprecedented in any way?

LIZÉE: Yes, but before doing that, they will first scrap features–.

I need to tell you the last one, because this is probably the most significant. In the case of the actives, say that you have a deficit of $30 million. Well, the actives, even somebody who’s just about to retire, will need to have immediate benefit cuts, what they have acquired over the last 20 years, so that they take up the bill for half of the deficit, and the employer will have 15 years on his side to amortize it. So, in other words, the act already says, this is what the–your benefits are being changed, and then you can negotiate for a year. If you don’t agree, there will be compulsory arbitration. And whenever it’s negotiated or arbitrated, then the regulator will look to make sure that every feature of the act has been incorporated. If it’s not, it will be sent back so that you put it in.

DESVARIEUX: Okay. I understand you. As I asked you, is this unprecedented? Why is it so significant?

LIZÉE: It is significant because it’s one of the first times that you see such an attack on acquired benefits, both for retirees and for actives, because they will lose immediately very significant benefits for the pensions. It is probably in violation of the Canadian Charter of Rights and the Quebec Charter of Rights. The unions have already warned that they’re going up to the Supreme Court, and there are proceedings where the Supreme Court held up that legislation cannot arbitrarily remove the right of negotiation, which is exactly what is now going on. And it will lead to unrest, because now you have a whole generation of people who have contributed all their life to pensions. Some of them have already retired. Some of them are just about to retire. And they suddenly learned that the pensions they were counting on are just disappearing under their feet.

DESVARIEUX: So let’s turn to talk about what politicians are saying about this issue. The CBC is reporting that Quebec City Mayor Régis Labeaume had this to say. Quote,

“Quebec taxpayers, and especially our youth, are paying the price.”

“For many municipal employees, their retirement years will surpass the number of years they worked.”

Kevin, I’m going to turn to you. What do you make of this?

SKERRETT: Well, it sounds to me like yet another effort to try to justify these kinds of cuts and attacks on compensation, you know, claiming to be sticking up for young people. But in fact, when you really think this through, what the effects of these kinds of changes to pension law and compensation in workplaces–this is transforming–this is just one part of the way that the workforce and pay is being transformed under these broader austerity programs. So when you think about what’s under attack, trade unions themselves are under attack, wages are under attack, free collective bargaining is under attack. And in this case we’re seeing this transfer, this overall compression in cuts to pensions and transferring risks from employers and concentrating those risks onto individual workers. And, in fact, as is widely discussed here in Canada, the most significant effects of these kinds of changes are hitting young people. So I think we’ve got to be looking very carefully at claims that these kinds of attacks are being done in the name of or in the interests of young workers.

DESVARIEUX: Yeah. Michel, what are the facts behind this, I mean, that statement about how their retirement years will surpass the number of years they’ve worked for many municipal employees? What’s the truth?

LIZÉE: There is some truth to that. But it’s important to notice that over the last few years, some unions and municipalities have negotiated, and typically the changes revolved around two key solutions: getting more funding from the workers for the normal costs of–to pay for the regular one, and the other one was to modify early retirement so that they would be moved back a bit. And so there was already a trend to move away from this, because the nature of work in many cases is changing. But there are some cases where in fact you cannot work that long, because you’re either physically or psychologically used after a few years at work. But the trend was already there to move it up.

Clearly what they want was to go beyond that. What they really want is a reduction in the global compensation of municipal employees of about 6 to 10 percent. That’s really what they’re aimed at. Municipalities complain they don’t have enough sources of income. The government will not give them sources of income, but it will reduce their expenditure side unilaterally.

SKERRETT: And, Jessica, if I could just add to that, what is so unprecedented about this–and we’re seeing some similar things in other provinces–is the Quebec government is using the power of legislation to actually limit and constrain what can be negotiated. Certain kinds of pension arrangements in municipalities are not going to be permitted in the wake of this legislation. This is a direct interference into collective bargaining. And as Michel says, I think a very strong case can be made that this violates fundamental charter rights in Canada. There have been–this is one of the most recent of a series of examples of provincial governments and others looking to basically continue this attack on pension arrangements, even up to and beyond what they’re legally permitted to do, and interfering directly into free collective bargaining. So this is another aspect of why there is such obvious anger in the streets of Montreal and across Quebec about this law.

DESVARIEUX: Alright. We’ll certainly be keeping tabs of that anger here at The Real News.

Kevin Skerrett, as well as Michel Lizée, thank you both for joining us.

Michel Lizee is a political economist specializing in pensions who recently retired from the Service aux collectivites de l’Universite du Quebec a Montreal (UQAM). He has been a pension trustee designated by the UQAM’s employees between 1983 and 2013. As part of his academic duties, from 1991 to 2013 he has been leading, in cooperation…

Kevin Skerrett has worked at the Canadian Union of Public Employees (CUPE) since 1994, most of that time as senior research officer focused on pension issues. His work involves all levels of union engagement, from collective bargaining to membership and staff education to policy work. In 2009, he spent a year working as a researcher…