Is Susan Rice “Bad for Congo”

Kambale Musavuli: Susan Rice's record on Africa suggests as Secretary of State, she would side with dictators and US allies Rwanda and Uganda against the people of Congo

Kambale Musavuli: Susan Rice's record on Africa suggests as Secretary of State, she would side with dictators and US allies Rwanda and Uganda against the people of Congo 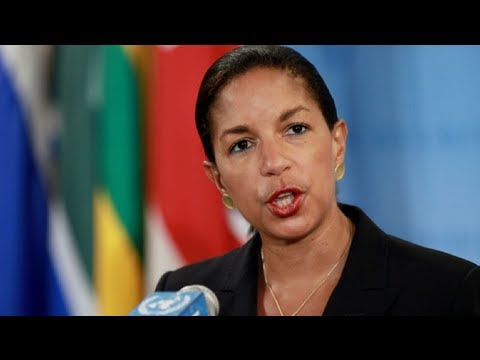 In Washington: a lot of debate about who’s going to be the next secretary of state. And, of course, Susan Rice’s name has been floated. She’s the current representative of the United States to the United Nations.

Now joining us for his view on the question is Kambale Musavuli. He’s a human rights activist originally from the Democratic Republic of Congo, and he’s a student coordinator and national spokesman for The Friends of the Congo. Thanks very much for joining us, Kambale.

KAMBALE MUSAVULI, SPOKESPERSON, FRIENDS OF THE CONGO: Thank you.

JAY: So what’s your take on this issue? Are you looking forward to the possibility of Susan Rice as secretary of state?

MUSAVULI: Well, it’s a tough question for me. And I’m saying it’s tough because I’m watching the debate, and the debate has revolved around parties and politics, which is hard for me, because my position for Susan Rice is that she is bad for Congo, and bad for Congo because of her record in Africa, specifically her record during the Rwandan genocide, during the Congo conflict. And even with the current uprising in the Congo, her record is really poor, thatâ€”as a secretary of state. I think the Congolese will have a hard time gaining some type of strong diplomacy for peace in the region.

So, what has she done, and what is she doing right now? During the genocide, she was among the people who pretty much sided for inaction to stop the genocide in Rwanda. And we know the result of thatâ€”one million people died. That is the estimate. It is very unfortunate.

In 1996 there was an uprisingâ€”actually, an invasion of Congo by Rwanda and Uganda, which, according to some of her statement during the time, she supported. You know, she was quoted saying that anything is better than Mobutu. Today we have over 6Â million people dead because of a military solution to the conflict.

In 2010 at the United Nations, when she was already the ambassador to the UN, there was a report called the UN Mapping Exercise Report, documenting the crimes of nations who invaded the Congo in ’96, and putting a timeframe from 1993 to 2003 of all the crimes committed in the Congo. Reports show that the U.S. almost blocked the report. The only reason it was released, it wasâ€”first the UN Mapping Exercise Report was leaked to the press, and there was a lot of uproar around this report, because it called what was happening in the Congo war crimes, crimes against humanity, and possible genocide if proven in a competent court, implicating Rwanda for committing genocide in the Congo. Her office was part of blocking this report, according to many analysts.

Now, this year, in the spring of 2012, we had a rebel uprising in the Congo. UN Group of Expert go and they see what is happening, and they write their report, implicating again one of the United States’ ally, Rwanda, for supporting rebel groups in the Congo. Guess what? Susan Rice blocked that report, according to diplomats and the Security Council. They were actually confused, and they were actually telling the press they are not understanding why would Susan Rice block this report. This was denied by the U.S. mission at the UN, and the comment was that they are giving Rwanda a chance to respond to this report, which was really preposterous. The report was published.

And then the final report, which was published this past November, showed how, again, Rwanda and Uganda are supporting rebel groups in the Congo. France writes a draft resolution on the crisis clearly stating that Rwanda need to be sanctioned for the issues in the Congo, that Rwanda has to stop supporting militia group in the Congo. Guess what? Susan Rice watered down the resolution, made sure that the name Rwanda was taken off the resolution and the resolution only speak about external support. And this was confirmed by many diplomats at the Security Council, and also it was reported in the press that Susan Rice has done so.

JAY: And why do you think Rice does this?

MUSAVULI: I believe she comes from the school of the Clintonites, pretty much. You know, we have to look at the conflict in the Congo in a historical context. Many people who worked with Bill Clinton have been a challenge for peace in the Congo because they are trained to cover for what actually happened during the Rwandan genocide and what happened in the Congo in 1996. So they provide cover for Paul Kagame of Rwanda, who is one of the staunchest U.S. ally on the African continent.

So by creating positions, solutions such as let’s give Rwanda a chance, or shutting down the reportâ€”this is not the first time the U.S. has done that. In 1997 they did the same thing, they blocked the GarretÃ³n report, while providing Rwanda for 16 years for the diplomatic backing that continued to happen for the Clintonites. This is actually what has caused the deaths of millions of Congolese.

So for me, as a Congolese seeing a record in protecting U.S. interests by protecting Rwanda, which it did, causing many deaths in the Congo, I don’t see that as secretary-of-state material.

JAY: Alright. Thanks for joining us, Kambale.