The US, Mining and Dictators in the Congo

Kambale Musavuli Pt3: People should demand a fundamental change in US policy towards the Congo

Kambale Musavuli Pt3: People should demand a fundamental change in US policy towards the Congo 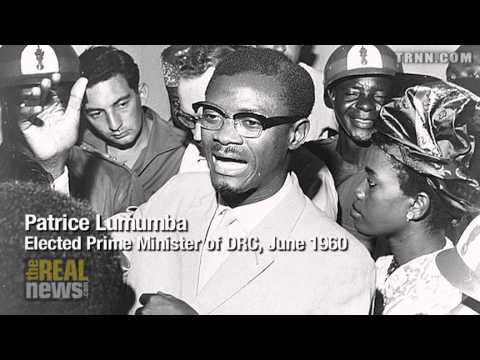 PAUL JAY, SENIOR EDITOR, TRNN: Welcome back to The Real News Network. This is the third in our series on the Congo. Now joining us again is Kambale Musavuli. He’s the student coordinator and national spokesman for the Friends of the Congo. Thanks for joining us again.

KAMBALE MUSAVULI, SPOKESPERSON, FRIENDS OF THE CONGO: Thank you.

JAY: If essentially what you’re describing from U.S. and U.K. and Canadian foreign policy is essentially how to help our mining companies and how to get the riches of the Congo out, if that more or less characterizes the current situation, what would you like to see?

MUSAVULI: Well, the people do not know that this is happening. So what I want the people to know first is to pressure the government to change the policy, one, by stop supporting dictators on the continent. It is not good for business. You know, chaos like we just shared in the previous segment does not allow people to be able to sell the product to the people. We do need the resources of the Congo, but you do not have to kill the Congolese to get to a shiny rock. You know, we could care less what these rocks are. So putting pressure on the governments of the West, specifically the United States government, to stop the policy of supporting strongmen. Second is to hold the companies accountable. It’s not a mystery. It’s not as [if] these companies, we cannot find their names. We do know who these companies are, because [crosstalk]

MUSAVULI: Yes. It’s been documented who are these companies who gave rebels private planes, build houses for them, make payments to them. So we know that. What is the national [incompr.] State Department is going to do about it? Friends of the Earth and [incompr.] accountability and development sent a letter to the State Department [incompr.] Cabot and the OM Group for what they were doing in the Congo. The national [incompr.] did not respond on American companies exploiting the Congolese. So holding mining companies accountable, especially the ones that’s operating here in the US, will also play a role.

JAY: And Canada is a big player in the mining business.

MUSAVULI: Yes. But I always argue that the Canadian mining companies are Americans. They just have the office there.

JAY: Many of them.

MUSAVULI: Exactly. So they understand that Canada is a safe haven for mining companies, so they just move to Toronto to do that. Many of the mining companies that were operating in the Congo did that. And then they keep changing the names. You know, it was called American Mineral Fields, then changed to Adastra. Today it’s called First Quantum. And no one will ever know First Quantum was American Mineral Fields in the beginning. So the third one is support of the people. That means simply the West have to get out African affairs. We do have internal problems, because you see in my presentation I didn’t talk about corruption.

JAY: And you can’t minimize the extent to which African corruption was the consequence of a Cold War which put these people in–put kleptocracies into power.

MUSAVULI: Exactly. So a disengagement of the West on African politics will actually help all of us, because right now it’s not all of us who’s benefiting, it’s a small group of mining companies and elitist people benefiting, while the whole entire world suffers from it. Just think about it. Congo could feed the whole entire world until 2050, when the world’s population is 9 billion.

JAY: How could the Congo do that?

JAY: Well, as we said in the first segment, I think–what was the number?–$24 trillion of potential mineral wealth in the Congo.

JAY: Now, just sort of a subjectively, how does this make you feel–which is a question I rarely ask, how does something make you feel–but the sense that five to six million Congolese can be killed or die as a result of war, mostly created in conditions by the West,–

MUSAVULI: And some of them, I know them.

JAY: –and barely on the radar of public perception?

MUSAVULI: Yes. I mean, in the beginning, actually, it was really disheartening. You know, you start building this type of anger and say, why the world does not know, why the world doesn’t care. But what I noticed very quickly as I start sharing the news with people, any person that I share with this information wants to help. But the person who does not want to help is the person on Capitol Hill, who will give me defensive sentences, or even in the State Department. The many off-records meeting that we have there or on-the-record meeting, whether we share with us that we are doing this, we are collaborating, we are coordinating and making these big statement. And you wonder, what are you coordinating when 2 million women are being raped in the Congo? What are you negotiating when 6 million people have died in the Congo? So we understand that the government does not want to deal with the situation in the Congo, because of its foreign policy where it supports the nation causing the chaos.

JAY: On the way to the interview, I was listening to C-SPAN, and there were congressional hearings by Senator Durbin being held on Africa. But the question they were discussing was how the United States can compete with China, not about the millions of people that have died and are still dying in the Congo and throughout Africa.

MUSAVULI: And it was the same thing also at the G-8 in 2010. You know, Congo was discussed at the G-8. Did you know what they were discussing? First Quantum losing the mining contract. The first time the Congo is discussed at the G-8 is not about the 6 million people dead or the millions of women raped; the discussion was how the Congolese government canceled a mining contract of a Canadian company. And the person who brought it to the G-8 was Stephen Harper, the Canadian prime minister. And they passed a resolution. The 2010 resolution talks about how Congo should abide by international rules of business.

JAY: Well, thanks for joining us.

Congo’s First Election in 49 Years: Has Democracy Won, Or Was It A Quiet Coup?