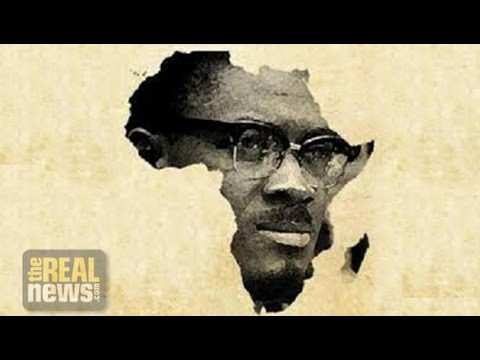 For some of us the year 1925 represents the origins of a kind of pan-African holy trinity. In Martinique that year we we got the birth of Frantz Fanon. In the United States we were given Malcolm X. And on the continent of Africa, the motherland herself, and in the Congo specifically, we all got Patrice Lumumba. July 2 would have been his 90th birthday had he not been assassinated on January 17, 1961. To commemorate his birthday and to discuss some of the continuing ramifications of Lumumba’s assassination is Kambale Musavuli.

Musavuli is a native of the Democratic Republic of Congo, and one of the leading political and cultural Congolese voices. He is also a human rights advocate and student coordinator and national spokesperson for the Friends of the Congo. Welcome, Kambale Musavuli, back to the Real News Network.

BALL: So let’s just start if we could with a quick summary of who Patrick Lumumba was, what he represented, and ultimately why he was killed.

MUSAVULI: Patrice Lumumba is–hate to say was, because I still believe his spirit still lives on. He was born in 1925 as a young Congolese from the Tetela tribe. He grew up in a region where he saw the violence of the Belgians against the Congolese. Congo was colonized by the Belgians since the late 1800s. And as he grew up in the system and had access to some form of education up to the seventh grade, he starts questioning some of the inequalities that existed. He was fortunate to be among the young leaders of the Congo who were invited at the Pan-African congress that Kwame Nkrumah held in Accra in 1958. As he attended that congress, he realized the importance of the Congo for the liberation of Africa. And Kwame Nkrumah made sure that he understood that.

Why Congo is important for the liberation of Africa, mainly because of its geostrategic position in the heart of the continent and the resources that he has. Went back to the Congo. He mobilized thousands of people to demand independence. And his fight with his comrades was successful in 1960. specifically on June 30, 1960, Congo gained its independence from Belgium. And that’s really what he represents for young Congolese. That through the struggle that we’ve had, always had Congolese leaders. From Kimpa Vita, the young Congolese woman fighter who fought the Portuguese to him fighting to gain independence and mobilizing a whole nation to be free.

BALL: And it was on that day, that famous day in 1960 where he gives his speech in front of the Belgian leadership, depicted in of course in documents and even cinematically, where he to some sealed his fate by announcing his intent to break the colonial ties from the West. Could you talk a bit about that, and then of course what that meant for the country and ultimately the continent, and really the rest of us.

MUSAVULI: Yes, and it’s quite interesting, the speech that he made there on June 30 of 1960. this is a speech actually that he made available to the Belgian administration 24 hours before. So they knew the content of his speech. He made a few small errors. Why I know, because now after 55 years since his death, this document has been made available for Congolese people as of last month, can you imagine that. But we see that they actually had the content.

But here is the context. You have a Belgian king who is 29 years old, who comes to the Congo with a patronizing speech where he’s talking about how they have given us independence, that we should be thankful for the Belgian king, Leopold II, who is responsible for millions of deaths in the Congo. We should be thankful that he brought, this genius brought civilization to the Congo.

Now, this 29 year old king was talking to a whole nation of Africans, of Congolese. Belittling them. So then at the same time they ask for the prime minister, Patrice Lumumba, who was democratically elected by the Congolese people, not to speak on that day. That didn’t sit well with him, that this was an important day that commemorates the 80-plus years of fight that the Congolese had to wage against the Belgians, that today we will not remember that.

So as you read the speech or hear the speech, the first sentence of his speech is to commemorate those who came before him. All the fighters for independence today are victorious. I salute you. That’s the first sentence, where he pays respect to our ancestors for the fight, reminds the Congolese of the struggle that took us to today, and then saying that the future of Congo is going to be bright but we have to fight and continue to work making Congo a better place for the betterment of Africa. That’s the context.

So whenever this is a [incompr.], I say he helped future generations to know the history of colonialism. If he never spoke that day, we will know that there were victorious fighters before Lumumba who made so many actions for us to be free. So I see him as a hero not just for the Congolese but for the world, and the importance of speaking out when you see something wrong.

BALL: You also speak to a threat he represented that garnered in part a response even from the then-president of the United States, Dwight D. Eisenhower. Also recently revealed in terms of actual documentation showing that he called for Lumumba to be, quote, eliminated.

BALL: So if we could use that as a sort of segue to a final statement from you in the few minutes we have left, to talk about why they would want him eliminated and what that has meant for the Congo today, and why that history and why it’s important that we commemorate and remember this particular history and the assassination, specifically, of Patrice Lumumba.

MUSAVULI: I mean, though [inaud.] the assassination of Lumumba, the central reasons of it still remains the same. It’s that global forces, specifically the United States and its counterpart in Europe, want to control Congo’s affairs and want to control the country. Mao would say whoever controls the Congo controls the world. You can’t have a young African 34-year-old prime minister of the Congo saying no to the U.S. to not access cobalt that they needed to use for the fight during the so-called Cold War.

So the control of the land, the control of the resources, is the essential reason of why he was eliminated. But his ideas are still here. You know, I wasn’t born in 1960. I still know of his idea. Same thing with all the young Congolese, that his ideas have lived beyond him. Not just here, not just in the Congo, but also here in the United States. For example, the youth of Ferguson with Hands Up United, just on June 28, they commemorated Patrice Lumumba. They even had young Congolese come there.

So his idea, his pan-African ideas have spread around the world, and the fight is not over. Young Congolese today are still fighting to reclaim the independence that we lost. We actually gained back, currently still suffering. We had millions of [death] and still Western power trying to control the resources. But in the final analysis, I believe in my lifetime Congolese will be able to break from under the yoke of Western imperialism and capitalism.

BALL: We certainly hope that’s the case. I want to thank you, Kambale Musavuli, for joining us here at the Real News Network. Thank you for joining us, taking the time today.

BALL: And thank you for joining us here at the Real News Network as well. And as always as Fred Hampton used to say, peace if you’re willing to fight for it, everybody. Peace, and we’ll catch you in the whirlwind.