Canadian Prime Minister Stephen Harper has single-handedly shut down Parliament. It is the second time he has done this since being re-elected in the October of 2008. Critics claim that the move was used this time in order to postpone an inquiry into accusations of war crimes complicity for members of his administration and the Canadian military. Stemming from evidence that Canada continued handing- over people detained in the war in Afghanistan over to Afghan prisons that they knew practiced torture.

Canadian Prime Minister Stephen Harper has single-handedly shut down Parliament. It is the second time he has done this since being re-elected in the October of 2008. Critics claim that the move was used this time in order to postpone an inquiry into accusations of war crimes complicity for members of his administration and the Canadian military. Stemming from evidence that Canada continued handing- over people detained in the war in Afghanistan over to Afghan prisons that they knew practiced torture. 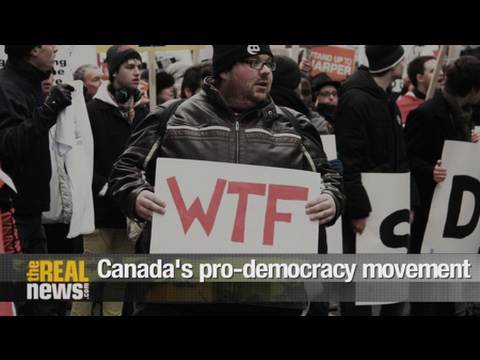 JESSE FREESTON (VOICEOVER), PRODUCER, TRNN: The Parliament of Canada has been closed since December 30 and won’t open again until March 3. This is because Prime Minister Stephen Harper has used a process known as prorogation in order to shut it down. The move has brought some out into the streets. In an interview with CBC’s Peter Mansbridge, the prime minister contended that the move is nothing out of the ordinary.

STEPHEN HARPER: Well, first of all, as you know, a decision to prorogue when the government has the confidence of the House is a routine constitutional matter.

FREESTON: Prorogation is a process where the prime minister asks the representative of the queen of England, known as the governor general, to temporarily close down Parliament. It is traditionally used once Parliament finishes all its business for a session. The Real News spoke to Barry Kay, professor of political science at Wilfrid Laurier University.

BARRY KAY, PROF. OF POLITICAL SCIENCE, WILFRID LAURIER UNIV.: It’s not that it hasn’t been used before. It’s the way in which it’s being used, just as a matter of an expedient to try to get away from an awkward situation.

FREESTON: This marks the second time that Harper has prorogued Parliament since he was reelected in October 2008. On neither occasion had Parliament finished its work. The last time was to avoid a vote of non-confidence that would have constitutionally handed power to a coalition of three opposition parties. This time, critics say, it’s about avoiding accountability.

FEDERICO CARVAJAL, CANADIAN FEDERATION OF STUDENTS: Him and his cabinet were actually being held responsible for their actions, and that’s what made him uncomfortable. And he decided that instead of answering those questions from elected representatives from the people of Canada, he decided to shut down the House.

FREESTON: The questions are arising from statements by former Canadian diplomat to Afghanistan Richard Colvin, who testified in November that the Canadian military was transferring Afghan detainees to Afghan prisons, where it was known that they were being tortured.

RICHARD COLVIN, FMR. CANADIAN DIPLOMAT TO AFGHANISTAN: The most common forms of torture were beatings, whipping with power cables, and the use of electricity. Also common were sleep deprivation, use of temperature extremes, the use of knives and open flames, and sexual abuse, that is, rape. Torture might be limited to the first days, or it could go on for months. According to our information, the likelihood is that all the Afghans we handed over were tortured. Canada took far more detainees than the British and Dutch. Unlike our NATO allies, we conducted no monitoring. Instead of hours, we took days, weeks, or months to notify the Red Cross, which meant nobody else could monitor. We kept hopeless records. And apparently to prevent any scrutiny, the Canadian forces leadership concealed all this behind walls of secrecy.

FREESTON: Colvin went on to identify a series of top Canadian officials, both military and civilian, that he had alerted about the situation. But instead of joining calls for an investigation, the Canadian government sought to discredit the messenger.

PETER MACKAY: What is being relied upon here is nothing short of hearsay, second- or third-hand information, or that that came directly from the Taliban. [snip] There has not been a single solitary proven allegation of abuse involving a transferred Taliban prisoner by Canadian Forces.

FREESTON: Days later, the head of the Armed Forces announced that in 2006 at least one Afghan man was rescued by Canadian troops after being tortured by the Afghan authorities they handed him over to. If so, then Canada’s policy of continuing to send detainees into a situation where they may be tortured would constitute a war crime under the Third Geneva Convention.

COLVIN: Officials in DFAIT [Dept. of Foreign Affairs and International Trade] and the Canadian Forces did not welcome our reports or advice. At first we were mostly ignored; however, by April 2007 we were receiving recent messages from the senior Canadian government coordinator to Afghanistan to the effect that we should be quiet and do what we were told, and also a firm message from the DFAIT assistant deputy minister suggesting that in the future we should not put things on paper but instead use a telephone.

FREESTON: All three opposition parties have demanded a full inquiry into the allegations. But the prorogation of Parliament has postponed that process. Nonetheless, in his interview with CBC, Harper deflected concerns that he shut down Parliament to avoid the torture inquiry.

PETER MANSBRIDGE, ANCHOR, CBC’S THE NATIONAL: I mean, you know you can’t pick up a story on this issue without somebody referring to the Afghan detainee issue, saying that that’s really the reason, that you and your government wanted to stop the investigative work of the committee.

PRIME MINISTER STEPHEN HARPER: I think polls have been pretty clear, Peter, that that’s not on the top of the radar of most Canadians.

MANSBRIDGE: No, but that’s not the question.

HARPER: What’s on the radar is the economy. [snip] And we want to take some time to recalibrate the government’s agenda, both on the economy and on some other matters.

RICK SALUTIN, COLUMNIST, THE GLOBE AND MAIL: It’s evident to everybody that Harper shut down Parliament because he was having trouble over the issue of Canadian troops in Afghanistan handing over Afghan prisoners to Afghan prisons, where everybody knew they were being tortured, and he kept getting deeper and deeper in trouble about it, and he shut Parliament down, and everybody knows that’s why he did it. I think he might’ve done better if he’d just say, "I don’t want to take the heat. I’m shutting it down so I don’t have to listen to this crap." But to say that he’s doing it so he can go away and think deep thoughts is—it’s not just false and misleading; it’s contemptuous, because it’s obvious to everyone that’s not why he did it.

FREESTON: When asked on Canada’s Business News Network about concerns his move would frighten foreign investors, Harper responded on the contrary, contending that investors actually prefer moments without Parliament.

HARPER: That said, as soon as Parliament comes back, we’re in a minority Parliament situation. The first thing that happens is a vote of confidence, and there’ll be votes of confidence and election speculation for every single week after that for the rest of the year. That’s the kind of instability I think that markets are actually worried about.

FREESTON: On Saturday, anti-prorogation organizers claimed people gathered in 60 communities across Canada to show their disapproval. About 5,000 marched in Canada’s largest city of Toronto.

FREESTON: While torture, the war, climate change, and unemployment were certainly a topic of concern amongst marchers, the majority of people we spoke to were mostly concerned about the general state of Canadian democracy.

MARIE KELLY, ONTARIO FEDERATION OF LABOUR: It’s absolute arrogance for Harper to think that our democracy is like a tap that you can turn on and turn off at your own will. Our democracy is not a tap. It’s something that runs day in and day out as a vein through our blood.

UNIDENTIFIED: This is just the latest in a pattern of evasive maneuvers that Harper’s undertaken to avoid the democratic process. I’m not sure what motivates it. Maybe he thought that Canadians don’t really care.

CARVAJAL: People need to change the way they look at their elected representatives, and we need to start holding them accountable. So the fact that Harper has been able to do all of this is partly our—it’s our fault and it’s our responsibility of people to fix that. You know. And I heard this before. It’s like, people should not be afraid of the government; government should be afraid of the people. And I think that’s what we need to do; we need to make government afraid of people.

SALUTIN: I think everything about this prorogation fiasco has shown that people are deeper thinkers than Harper’s pollsters give them credit for. Pundits said, well, Canadians don’t care if Parliament’s in session. They don’t even know if Parliament’s in session. Columnists wrote that. And Parliament is a farce. People yell at each other. It’s an embarrassment. You know what? It’s all true. Parliament is a despicable place. The level of debate is subkindergarten. And yet people still have an attachment to the institution, as opposed to the way it’s being run. You don’t just dismiss it as if it’s insignificant in people’s minds. I think that was Harper’s mistake.

UNIDENTIFIED: The fact that the government is okay with not having a legitimate democratic representation of its public is a huge problem.

KAY: —that once Parliament meets again, in March, I guess it is, I think the issue will kind of go away. It’ll be hard, come March, for people to be upset about something that’s no longer relevant. So, while just as the application of it a year ago by Harper was criticized at the time by a number of people, it didn’t really stick then, and I’m not sure it’s going to stick now.

FREESTON: He adds that for now Harper has dropped in popularity. The latest polls show the ruling Conservatives have fallen to just over 30 percent support—a near tie with the opposition Liberals, with the remaining parties splitting the other third of the electorate. For many, it is ironic that Harper would be targeted for a lack of democratic accountability. When he was originally elected in 2006, it was on a platform of accountability and transparency, a response to public discontent over the secrecy and corruption of the ruling Liberal party. In criticizing the Liberals in 2005, Harper told the Canadian Press that "When a government starts trying to cancel dissent or avoid dissent is frankly when it’s rapidly losing its moral authority to govern."

UNIDENTIFIED: I’ve been a Conservative all my life, but after viewing what Harper has been doing for the last four years, or since he got in with his minority government, at this point in time I would never vote Conservative again. Everything he said that he was going to do, he’s gone the opposite way. All politicians are somewhat cynical. They lie to a certain degree. This man has gone way over the top.