The Companies Profiting from Police Militarization

The event was sponsored by manufacturers like Lockhead Martin, Colt Weapons, and Safariland, who produce tear gas, arms and stun grenades.

The expo will help police departments “violently squash [popular uprisings] with all kinds of new technology that they learn about in places like Urban Shield,” said Kimber Heinz of the War Resisters League.

Local police forces throughout the U.S. have militarized since the '80s and the war on drugs.

“There is a huge industry behind it,” said Heinz.  “There is a profitability behind this.”

The event was sponsored by manufacturers like Lockhead Martin, Colt Weapons, and Safariland, who produce tear gas, arms and stun grenades.

The expo will help police departments “violently squash [popular uprisings] with all kinds of new technology that they learn about in places like Urban Shield,” said Kimber Heinz of the War Resisters League.

Local police forces throughout the U.S. have militarized since the '80s and the war on drugs.

“There is a huge industry behind it,” said Heinz.  “There is a profitability behind this.” 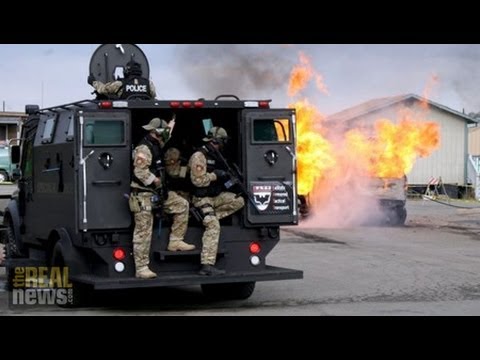 Over this past weekend, SWAT teams, military contractors, and many more groups from all over the world met in Oakland, California, for the seventh annual Urban Shield. That’s actually just a training and weapons expo. Urban Shield, however, wasn’t welcomed by all. More than 30 community groups, some from families of victims killed by police forces, protested outside the event.

Now joining us to discuss all this is Kimber Heinz. She is a national organizer with the War Resisters League and the Facing Tear gas campaign.

Thanks for being with us, Kimber.

KIMBER HEINZ, NAT’L ORGANIZER, WAR RESISTERS LEAGUE AND FACING TEAR GAS: Thanks for having me.

DESVARIEUX: So, Kimber, just give us a brief explanation of what Urban Shield is and who’s behind it.

HEINZ: Sure. Urban Shield is a massive meeting and expo for over 100 police and military agencies and units, mostly in the California area for this–in this particular case, but also across the U.S. There are several involved in–internationally. There are multiple international guests to this year’s Urban Shield.

And it’s sponsored by a number of what they call “vendors”, what many of us would call war profiteers, people and groups that you’ve probably heard of, from Lockheed Martin to ATK, which manufactures depleted uranium for the U.S. military, to Colt weapons, which–maybe many of your viewers have heard about Colt guns in the context of U.S. militarism, to one of our campaign targets, Safariland, which creates nonlethal, quote-unquote, weapons like tear gas and stun grenades and this kind of thing for police units around the world.

And they’re essentially showcasing their wares and providing training opportunities for SWAT teams throughout this weekend and what they call a disaster response test and training, so what we would call a repression marketplace for these various companies and government agencies to meet one another and practice their techniques.

DESVARIEUX: How does Urban Shield actually facilitate or, I should say, impact this repression in other countries and in the United States?

HEINZ: Well, they provide training grounds. So, for example, they’ll have one training where–I mean, this was the past year–an animal rights group, according to this particular training, had held a number of people hostage in a room somewhere in a company that was testing on animals, and essentially the police were being trained in how to respond to this as a SWAT team type scenario. That’s something that’s pretty common, these types of trading scenarios involving bomb threats or what, you know, police would call a terrorist threats is one example.

And, also, because they have a number of international police units and agencies involved–in this year’s case, it’s police from Israel, Guam, Brazil, among others, who of course are notorious for in recent years, and in some cases a lot longer than that, repressing the people who live in their country. They are actually being trained in the latest techniques as well in repression and meeting a lot of the companies that they are able to then do business with in order to acquire some of the weapons technology that they use against popular uprisings and people on the streets, wherever they are.

DESVARIEUX: What do you see as the motives behind the militarization of police forces?

HEINZ: Well, that’s the question that we’re asking ourselves a lot more as the organizing against the militarization of the police is growing. We know that in terms of local militarization of the police and the U.S., it’s grown a lot since the ’80s and the war on drugs. That’s something that’s gone from 3,000 SWAT team raids per year to over 50,000 per year. And that’s been documented.

There is a huge industry behind it, as we’re mentioning with a lot of the corporate sponsors, like Lockheed Martin, like Safariland. There is a profitability behind this. And more so is profitability in this particular historical moment where, of course, with the ’80s, the war on drugs was huge, but now, since around 2011, when we have a time of massive social uprising, beginning with the Arab Spring, through Occupy, through some of the protests that we’ve seen over the summer, for example, in Brazil or in Turkey, the student movement in Quebec the Red Square movement, all these different movements, there is actually now an understanding that this is a time of uprising, and that not only can you make money by repressing people in these uprisings, but they are a threat to the powers that be. And I think that more and more money is being put into this kind of funding of police forces that, you know, in some cases will disappear people, incarcerate them, put them in detention centers, but in some cases, especially in terms of these popular uprisings, these massive gatherings of people and protests, will violently squash them with all kinds of new technology that they learn about in places like Urban Shield.

DESVARIEUX: Okay. Kimber Heinz, thank you so much for joining us.

DESVARIEUX: Thank you for joining us on The Real News Network.

Kimber Heinz is the National Organizing Coordinator with the War Resisters League and the Facing Tear Gas campaign, which seeks to end police militarization and the use of tear gas and related chemical weapons globally. She is also a board member of Under the Hood GI Cafe and Outreach Center outside of Ft. Hood, TX. Currently based in Durham, North Carolina, Kimber is a…