Katharine Hayhoe, Director of the Climate Science Center at Texas Tech University, says we need to put a price on carbon

Katharine Hayhoe, Director of the Climate Science Center at Texas Tech University, says we need to put a price on carbon 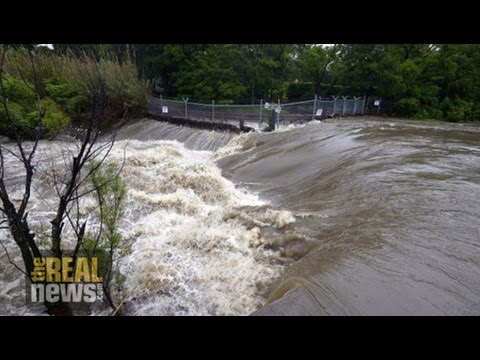 Last week marked the end of a four-year-long drought in the southern central part of the country [the United States]. But now tornadoes, heavy rainfall is hitting Texas, Oklahoma, and northern Mexico. Some are saying that these extreme weather events are part of a natural cycle, while others link it to climate change. With us to discuss the issue is Katharine Hayhoe. She is an associate professor and director of Climate Science Center at Texas Tech University, located in Lubbock, Texas.

Thank you so much for joining us, Katharine.

PERIES: So Katharine, give us a sense of, first of all, the damage that these floods and tornadoes are currently causing, and how are people recovering from it?

HAYHOE: Across the state we had an average of almost 9 inches of rain during the month of May. Some places got much more than that, and other places got a bit less. If you added up all of the water that went only into Texas reservoirs over the past few weeks, that would be enough to cover the state of Rhode Island with about 10 feet of water.

So we have received an enormous amount of water. And of course the reason why we care about it is because when it falls in such perfusion, we often get all of the floods and all of the associated damages like we’ve seen the past few weeks.

PERIES: Now, at the same time we’re experiencing severe drought and water shortages in California. We’re experiencing extreme weather conditions in places like India, where the heatwave is killing some, over a thousand people so far. Can these different extreme conditions that are going on around the world a trend that is happening?

HAYHOE: People often set up what I see as a false debate. You know, is what’s happening all-natural, or is what’s happening all due to human-induced climate change? But that’s kind of like saying, you know, is someone’s heart attack all genetics, or is it all lifestyle? Or is it all diet, or is it all lack of exercise? We know that there’s multiple factors that go into any type of extreme weather like we’re seeing today.

So for example, the world has always seen heatwaves and floods and droughts, and Texas is particularly prone to those types of weather events. Add to that the fact that May and June are our severe weather season when we typically get those events. Then, this year is the first El Nino year that we’ve had in a very long time. And we know that El Nino often exacerbates many of our natural weather extremes.

But we also know that humans have altered the background condition of our atmosphere. We know that every event that happens today, whether it’s rain or drought or heat or cold, has some small component of climate change in it. For some things like heatwaves, we know it’s probably a little bit bigger. For other things like tornadoes, we have no idea what climate change is doing yet. But what we do know is that our world today is a very different world than we would have lived in 50 or 100 years ago.

PERIES: And you said it is exacerbated by El Nino effect. What is that?

HAYHOE: El Nino is the ‘Christ Child’ in English. It’s called this because it’s usually signaled by warm ocean temperatures off the coast of Peru in the winter. These warm ocean temperatures, though, set up a cascading pattern of weather across the world that has been associated with floods, especially in California, as well as wetter conditions here in the Southeast, or Southwest. It’s also associated with all kinds of other weather patterns around the world.

PERIES: Now, I understand that there is a conference coming up of the World Meteorological Organization in Geneva, and they’re having a conference linking all these weather events to actually climate change. Is there enough of a body of evidence that supports that in order for them to even have a conference on this topic?

HAYHOE: Well in fact, the Intergovernmental Panel on Climate Change, which is a group of international climate scientists that periodically summarize all the scientific studies on a certain topic, the IPCC published a special report on extremes already two years ago. And it was a very thick report, and it summarized a lot of science showing that yes, we are seeing increases in the frequency of heavy rainfall events. We are seeing increases in the frequency and the severity of extreme heatwaves. We are seeing stronger hurricanes and tropical storms because of warm ocean water, but not necessarily more frequent, just stronger. We’re also seeing shifts in our drought patterns. If it’s a lot hotter when we have the drought, more water evaporates out of our soil, and our droughts get stronger.

So we’re seeing a lot of extreme weather around the world that is becoming more frequent and/or more severe. And we can tie this explicitly to the fact that our atmosphere is now much warmer than it would have been, again, 50 or 100 years ago, because of all the carbon dioxide that we produce whenever we burn coal or natural gas or oil. That carbon dioxide sits up there in the atmosphere, and it’s like wrapping an extra blanket around the earth. An extra blanket that traps the heat inside the earth that should be escaping out to space. That’s why we’re heating up, and that’s why we’re seeing an impact on, over 20, 30, 40 years, we’re seeing a long-term impact on the frequency and in some cases the severity of many different weather extremes.

PERIES: Now, one of the things that this discussion or debate has done, at least here in the U.S., is really paralyzed the policy-making community in terms of addressing through policy some of the climate change, changes that are going on and that we are witnessing, and try to counter it. Now, in your opinion–hopefully it’s not too late. But what kind of policies need to go into place in order to address climate change and these kinds of extreme, managing the extreme weather conditions we’re experiencing now?

HAYHOE: Well first of all, I would actually disagree with you a little bit. I would say that there are many people who are not being paralyzed, and who are moving it forward. But they’re not doing this at the federal level, they’re doing this at the level of individual cities and individual states. I work with states and cities all across the United States, helping people prepare for a changing climate. The first type of policy we need is policy that helps us become more resilient and less vulnerable to the changes that we’re seeing all around us. And cities and states all around the United States are preparing for changing climate.

But here’s the other side of the coin. If these changes we’re seeing are not a natural cycle, if these changes we’re seeing over 20 to 30 to 40 years, if they are because of all that carbon we’re putting up in the atmosphere–and again, humans have been putting this carbon up for a couple hundred years now, and it’s building up, and it’s trapping all that heat. And scientists are very sure that this is what’s driving these extremes. If that’s the case then, we need a second type of policy also. Because we could do all the preparing we want to, but the changes are going to keep getting faster and faster and more and more extreme, to the point where we can’t really prepare them. It gets way too expensive.

So the other type of policy we need is a federal policy, and that is where people are stuck. We need a federal policy that puts a real price on carbon. Right now we’re actually supporting all this carbon production to the tune of about -$15 a tonne. We are subsidizing all this carbon, and it’s causing all these damages. If we put a price on carbon then we can say, okay, here’s how much it’s really costing us. Do we really want to be putting all this carbon in the atmosphere or not? That’s where we need the second type of policy, and that is where the wheels are stuck in the mud, so to speak.

PERIES: Katharine, I want to thank you so much for joining us today and shedding some light on not only the damage it’s causing, climate change, but also the potential ways of addressing it. We’ll be back, and I hope you keep us abreast of developments.

HAYHOE: Thank you so much.

Katharine Hayhoe, Professor of Atmospheric Sciences at Texas Tech University. She is also the founder and CEO of ATMOS Research, where we bridge the gap between scientists and stakeholders to provide relevant, state-of-the-art information on how climate change will affect our lives to a broad range of non-profit, industry and government clients.