Manning Found Guilty of Espionage, Faces 100-plus Years In Jail 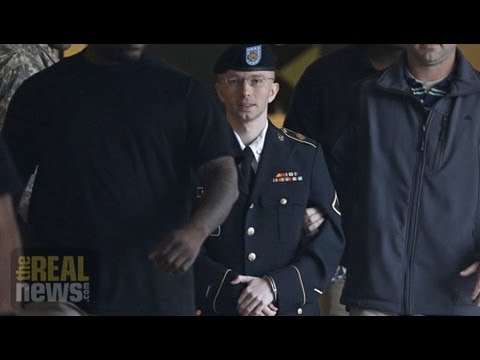 Here to look at the details and themes of the trial is Kevin Gosztola. Kevin is a civil liberties blogger at Firedoglake and was one of only a handful of journalists covering the Manning trial on a daily basis.

Thanks for joining us, Kevin.

DESVARIEUX: So, Kevin, first let’s discuss the verdict, not guilty of aiding the enemy, but guilty of ten counts. We have espionage and theft. First of all, what is the significance of him being convicted of espionage? And also, can you break down the charges that Manning admitted to, compare that to the charges that the judge convicted him of?

GOSZTOLA: The significance of the Espionage Act offenses, those convictions are just the reality that the Obama administration has pursued a record number of prosecutions of leakers or whistleblowers, however you might view them, under the Espionage Act, you know, pursuing and prosecuting leakers as if they are spies.

So today we have the judge convicting Manning of multiple violations of the Espionage Act. Though she did not find him guilty of aiding the enemy, this is still a significant aspect of the verdict.

As far as what he pled guilty to back in February, what I can tell you is there were some lesser offenses accepted related to dates of offenses, some I think related to the “Collateral Murder” video. Importantly, he was found not guilty of releasing this Granai airstrike video. There are some lesser included offenses, I think, tied to some of these violations, these general violations of the military code of justice.

But overall what we’re seeing is–the remarkable aspect of this new ruling is that these are the federal violations, these are the charges for violating federal laws.

DESVARIEUX: Let’s talk about the significance of these violations and him being charged, specifically when it comes to convictions of national security leaks. What would this mean for other whistleblowers like Edward Snowden and future whistleblowers?

GOSZTOLA: The effect on whistleblowers has already been seen. Bradley Manning’s case had an influence on Edward Snowden’s ultimate decision to flee to Hong Kong. He did not want to be put in a prison cell like Bradley Manning for nine months in conditions that were essentially solitary confinement.

But what this conviction under the Espionage Act of multiple violations, of being accused of stealing the information even when he regularly had access to that material, I think that it’s going to be something where people who are within the military, or even within national security contracting firms, or even in just intelligence agencies will be looking at this case and saying that this is a message to them that they should be very careful about coming forward and revealing information. And it’ll just add to the chill, the sort of chilling effect that has been cast on whistleblowers as the Obama administration has become notorious for the fact that it is carving out exceptions to whistleblower protection acts that do not cover national security whistleblowers.

And we also think it’s an open question that the Military Whistleblower Protection Act could ever have covered Bradley Manning if he had found the information. I think it’s a very open-ended question as to whether he bringing this information to his superior officers would have had any effect at all, especially if you look at recent stories like Jonathan Landay publishing the story for McClatchy on Sabrina De Sousa, a former CIA officer who spoke out over the weekend in a story about a Bush administration rendition operation. So I think the impact of Bradley Manning’s verdict will have a rippling effect into the rest of this year.

DESVARIEUX: And looking ahead, where does the defense go from here?

GOSZTOLA: Looking ahead, we have a sentencing phase. The defense will be very prepared. They’re going to have more than 20 witnesses ready to come and take the stand and testify about the nature of the information, and also part of Bradley Manning’s motive, what he did. There is a possibility here–just I’ll throw it out here–the possibility that Bradley Manning takes the stand before the sentencing phase is over. And any testimony given is going to be all about ensuring that Bradley Manning is not sentenced to prison for the rest of his life, that he can come out of his cell at some point in his life.

And the prosecutors are going to be prepared as well. They’re going to have more than 20 witnesses. And their burden is going to be to show that all of this information did cause the kind of damage, did do the kind of harm, is the sort of material that Bradley Manning should never have released.

So beyond the crime, let’s talk about the nature of the information that has been exposed. And that’s going to be quite the focus of the sentencing phase.

And then for the defense there is the whole situation of whether they go forward with an appeal. And as I’m talking to you right now for this segment, we have no news to report of the defense filing for an appeal. But those violations of the Espionage Act and those violations of the Computer Fraud and Abuse Act and then the stealing offenses, maybe there’s something within those that Manning’s defense attorney, David Coombs, is going to look at and decide he would like to file an appeal.

DESVARIEUX: Thanks so much for joining us, Kevin.

GOSZTOLA: Thank you very much.