“Everyone But China” Agreement Prevents Regulation of Hot Money and Speculation 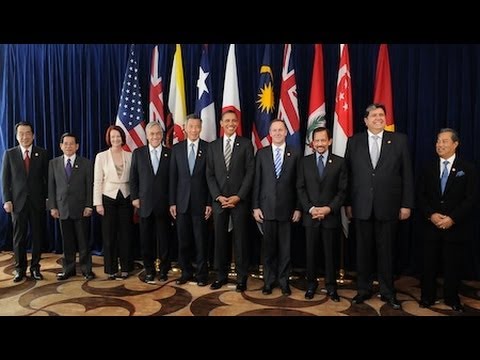 The Trans-Pacific Partnership is rather controversial. Amongst other things, its critics say, it will weaken the sovereignty of many of the countries that sign on to that agreement. It’s also apparently become an everyone-in-Asia-but-China agreement.

Now joining us to talk about the significance of the TPP is Kevin Gallagher. He’s an associate professor and director of the Global Economic Governance Initiative at Boston University. He’s the cochair of the Party Task Force On Regulating Global Capital Flows. And he joins us today from the PERI institute at Amherst, Massachusetts.

KEVIN GALLAGHER, ASSOC. PROF. INTERNATIONAL RELATIONS, BOSTON UNIVERSITY: Thanks for having me, Paul.

JAY: So why is this trade agreement so controversial?

GALLAGHER: Well, there’s a whole host of reasons why the trade agreement is controversial.

First, it’s seen largely as a geopolitical move, rather than economic move. The United States is trying to surround China with trading partners so that it can try to get China to move away from some of its economic policies. If you take a look at the economic studies that look at the benefits of the agreement, they’re less than 1 percent of GDP for most of the countries involved.

But the big thing that a lot of countries are concerned of is that it will really curtail their national sovereignty to do a whole host of welfare policies and social welfare policies, and even to regulate their financial systems.

GALLAGHER: For example, one of the things going on in the world economy right now is that there’s all sorts of hot speculative capital or finance–bonds, derivatives, and so forth–moving out of the rich countries because the rich countries aren’t doing so well and sloshing around in the emerging market in developing countries. And those countries are regulating that so that it doesn’t cause asset bubbles and crises in their countries. But our treaty would make those kind of measures illegal.

JAY: Now, before we get into the issue of capital flows, this agreement contains within it provisions where private companies can sue governments sort of like they can do under NAFTA. Is that right? And that’s been one of the criticisms.

GALLAGHER: That’s correct. That’s one of the biggest concerns in many countries and lots of advocates in the United States have. Unlike the World Trade Organization, where if there’s a dispute between two countries, the two country governments have to come together and make claims against each other in a public forum at the World Trade Organization, under a U.S. trade deal a private sector actor, say, a foreign investor, can directly sue a foreign country for a measure that is in violation of the agreement in a somewhat closed environment in a private tribunal at the World Bank.

JAY: So now let’s get into this issue of hot money and capital flows. This whole issue of whether capital is free to do whatever it wants cross-border has been one of the more controversial issues in international trade. What does the TPP say about it, and how are people responding?

JAY: Now, wasn’t this one of the most important economic theories of the ’90s and all this, that this whole point of free trade agreements was the free flow of capital, and that’s supposed to give rise to growth, and limiting capital flows is supposed to be old-school?

GALLAGHER: Yeah. It worked well on the blackboard in the 1990s, and definitely the prevailing economic theory was if you let go of restrictions on finance, it would cross borders and it would move into countries that don’t have enough investment and those countries would grow. But 20 years of economic evidence shows that there’s no strong relationship between opening yourself up to capital flows and economic growth and that there is a pretty strong relationship between opening up to capital flows and having banking crises, at least until you hit some mid level of development.

JAY: So give a specific example of why this is a problem. And this has a lot to do with speculative activity in this derivatives trading and, I guess, countries’ ability to control this sort of thing.

GALLAGHER: Yeah, absolutely. If you want to make a distinction on capital flows, there’s foreign direct investment, which is a multinational that’ll go to your country and open up a building that’ll make things and employ people and actually sell products like shoes and cars and so forth. That’s called foreign direct investment. It has its controversial aspects, but it’s not something that is usually going to cause a financial crisis.

What we’re really concerned about is the movement of things like you noted, such as derivatives, currency trades, stocks and bonds, and so forth that can move in and out of a country within minutes and days. And in the wake of the crisis, developed countries–the United States, Japan, and the Europeans–have been expanding central bank balance sheets to get interest rates really low. We’re trying to expand the economies here.

So a specific example is Brazil. Brazil’s had an interest rate at about 10 percent since 2009. The United States interest rate’s been about 2 percent. So you borrow money from the United States at 2 percent, you invest it in Brazil–say you buy the Brazilian currency at 10 percent. You make the differential in between the two interest rates. You can manufacture a derivatives trade within that and bet against the dollar and on the Brazilian real at the same time, and if you’re leveraged significantly, you can make a killing for yourself. But you might also cause some real problems in the case of Brazil. In Brazil’s case–.

JAY: Like, you’ll be driving the Brazilian currency even higher.

GALLAGHER: Yeah. The Brazilian currency in between 2009 and 2011 appreciated by about 40 percent. And so Brazilian exporters of manufacturing and all sorts of other goods couldn’t compete in the world economy, and it caused havok in their economy. It’s one of the reasons why they’ve had significant slowdown in growth in the past year.

JAY: And this has been one of the big critiques by these countries of the American quantitative easing, the Fed’s policy that it’s been encouraging by shoveling this money into the banks to do this carry trade. Now, a lot of people are talking about how this kind of leads to–somebody–I forget the name of the guy, but somebody coined currency wars as the term. Is that where we’re headed?

GALLAGHER: Yeah, that’s the environment that we’re living in now. It was Guido Mantega, the finance minister of Brazil, who pointed his finger at the United States for its low interest rates and said, you’re causing a currency war here, because by expanding expansionary policy in the United States, it makes the dollar weaker, and if the dollar’s weaker, other countries’ currencies are stronger and it’s harder for them to compete in the world.

Another shot in the currency war just happened a couple of weeks ago at the G7 and G20 meetings, because Japan has now gotten back into the game and it is trying to get low interest rates, and people are worried that the yen will be cheap. And that’s another part of the currency war.

What our expert panel report is concerned about is that this currency war could turn into a trade war, because one of the things that developing countries are trying to do to defend themselves from this sloshing hot money that’s coming from the rich countries is putting in place regulations on cross-border finance.

JAY: And we know from the 20th century and before that trade wars can often lead to real wars.

JAY: The TPP–everyone but China–is this part of the scenario, that the Trans-Pacific Partnership becomes a tool for waging currency war against China?

GALLAGHER: I’m not sure it’s a tool for waging a currency war against China, but it really is going to restrict the ability of the countries to defend themselves with respect to this currency war. Some of the key countries that are involved in the TPP on this hemisphere are Peru and Chile, on the Pacific side are Vietnam, Singapore, and Malaysia. Those are countries that because they’re dynamic emerging-market economies and have relatively higher interest rates, they have been witnessing this high exchange rate appreciation and the development of asset bubbles in their real estate markets and in their stock markets because of all this hot money. And traditionally those countries have been using regulations to mitigate cross-border finance. They wouldn’t be able to do that now.

JAY: No one’s making them sign these agreements. Why are they–why do they want in?

GALLAGHER: Well, they want in because they want access to the U.S. economy. And so that’s what they’re trading away. I wouldn’t only criticize the United States. I’d criticize some of our trading partners for trading too much away to get access to our slow-growing economy.

We’ve got a huge, $15 trillion economy. People want access to it. That’s what we offer on the table. But the conditions for access to our economy can often be really detrimental for the ability of countries to grow.

Chile and one other country in the Trans-Pacific Partnership negotiations is pushing to get an exception to the TPP so they can regulate cross-border financial flows. Right now the United States is continuing to refuse to allow that kind of exception so that countries can prevent and mitigate financial crises.

JAY: Alright. Thanks very much for joining us, Kevin.

GALLAGHER: Thanks for having me.

Kevin P. Gallagher is Associate Professor of International Relations at Boston University and a Faculty Fellow at the Pardee Center. He also serves as Senior Researcher at the Global Development and Environment Institute at Tufts University. This policy brief is an update and expansion of his forthcoming book with Roberto Porzecanski, “The Dragon in the…