Through his nominees of federal judges and prosecutors, Donald Trump is overseeing a radical overhaul of the US judicial system, says Kamau Franklin, attorney and political editor of Atlanta Black Star

Through his nominees of federal judges and prosecutors, Donald Trump is overseeing a radical overhaul of the US judicial system, says Kamau Franklin, attorney and political editor of Atlanta Black Star 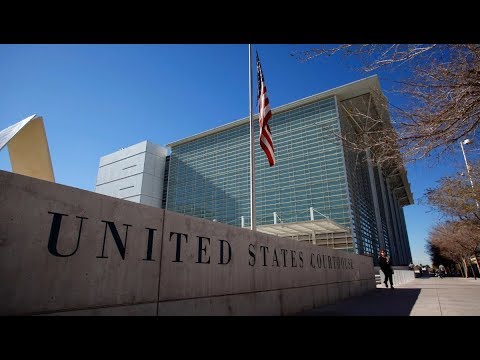 AARON MATE: It’s The Real News. I’m Aaron Mate. Donald Trump’s presidency has been hobbled by some internal turmoil and the president’s own impulsive behavior, but one area where the Trump agenda is moving forward is in the nation’s courts. With most of the country’s focus elsewhere, Trump is overseeing a radical overhaul of the U.S. Judiciary. Trump inherited 107 vacancies of the 890 federal judicial positions. That’s the most empty bench seats since President Clinton, and Trump is taking advantage. He’s filling the bench with nominees in his image who come from the radical far-right. It’s not just on the bench that Trump is overseeing a makeover, but also on the side of the prosecution. Of the 42 U.S. Attorneys that Trump has nominated, 41 of them are men, 38 of those men are white. There’s just one African American and one woman.

AARON MATE: Thanks for joining us. Just to give a sense of the caliber of nominees that Trump is putting forward for the nation’s courts, I want to go to a clip from a recent hearing for one of them. His name is John Bush. He’s a lawyer from Louisville, and he was nominated to the U.S. Court of Appeals for the Sixth Circuit. He was questioned by Senator Al Franken about some of his blogging activities.

SEN. AL FRANKEN: [G. Morris], alias when you wrote a series of posts about President Obama that seem to focus on the president’s Kenyan heritage, one of those post quotes freely from an article from World News Daily, a website known for peddling conspiracy theories, fake news, and white nationalism. World News Daily was also well known for trafficking in birtherism, the widely debunked and racist belief that President Obama was not born in the United States.

JOHN K. BUSH: I was certainly not intending to endorse any views of another group. As far as birtherism goes, I’ve never [crosstalk]

JOHN K. BUSH: As a blogger, I was finding things that were in the news that were of note. I thought, I wasn’t intending to through the posts to say that President Obama was not born in this country. I never made that allocation.

JOHN K. BUSH: As I said when I was doing the blog, I made some posts that I today would not do.

AARON MATE: That’s John K. Bush testifying before the Senate about his blog. He, again, is a nominee for the Court of Appeals for the Sixth Circuit. Kamau Franklin, as you hear that, your thoughts.

KAMAU FRANKLIN: Well, if it wasn’t so sad, it obviously would be comical, but these are the people who are going to be in a position to decide on environmental laws, immigration laws, corporation rights versus individual rights, civil rights, abortion laws, and the litany goes on. These folks, once they get on the court, who mirror, as you stated earlier, a lot of Trump’s views, and more importantly, a lot of really hard right-wing views about how the world operates and who should be in charge, these people will be making decisive decisions on our future. Remember, these are lifetime appointments that go on. Once these nominees are appointed on the bench, their views are extremely important in terms of what rights we as citizens of this country will have in the future.

AARON MATE: What can history tell us about this dynamic that you’re talking about?

KAMAU FRANKLIN: I think history tells us that we’re in a very dangerous place. We have historical Supreme Court, and obviously Appellate Court decisions, which affect human rights, which affect civil rights. We have Plessy v. Ferguson. We have other cases, of course, which talk about whether or not people have rights as citizens of the country. These type of appointees will slowly start. They probably won’t do something as dramatic as what we’ve had in the distant past, but what they will do is slowly whittle away the rights that we think that we already should have. Voting right protections will start to be whittled away where we have things like ID laws, which are now being upheld because some of the affirmations of these type of judges.

We have things on marriage equality, which now we think as a now settled law, which won’t be settled, recently settled law, but not won’t be settled. There will be cutbacks on protections for defendants. We think about protesters who come out and put their body at risk to say that something’s wrong, and they expect to get maybe a slap on the wrist or something to continue doing the work that they’ve been doing. Now we’re talking about potentially hard penalties from these hard right-wing judges who will come in and say look, we’re trying to prevent this. We’re trying to establish our domain over what’s happening around the land.

AARON MATE: There’s a piece in The Nation called ‘Trump is Appointing Racist Fake News Purveyors to the Federal Bench.’ It lists Bush, who we heard from as an example. Another one that it cites is Damien Schiff, Trump’s nominee to the U.S. Court of Federal Claims. It quotes from his blog as well, another blogger going to the bench, where Schiff criticized the California School District for advancing the idea quote and this is Schiff, “Not only the bullying of homosexuals qua homosexuals is wrong, but also that the homosexual lifestyle is a good and that homosexual families are the moral equivalent of traditional heterosexual families.”

KAMAU FRANKLIN: Yeah, I think it’s obvious that these nominees, who the conservatives like to pretend are not going to be activists on the bench, are very much going to be activists on the bench, and are very much going to be putting in what they consider to be their own values, their own standards, the way that they think that others should be living their lives. That’s going to be something that’s going to take us back to a time of the 1950s where straight heterosexual family, nuclear families are the way in which these court interpretations are going to be delivered to us. I think there’s a lot for us to be worried about. I think there’s other nominees who are also coming down.

We have, I think, Greg Katsas, who was a former clerk for Clarence Thomas who was just nominated, who’s done a lot to work with, who is currently a Deputy Attorney for Trump, and is doing a lot on DACA and other things. He’s going to take those views to the Court when he’s appointed. I think, again, some of their opinions strike us as so far outside of the mainstream conversations of things that we would consider normal opinions to have, but again, these folks are now being considered and being taken seriously as new appointees on the Federal Court.

AARON MATE: Taking something like the Muslim ban, which has run into some roadblocks from Federal Judges, is it fair to say though that if these benches are remade in their image, then the road even to the Supreme Court for these things to be challenged like the Muslim ban becomes even tougher.

KAMAU FRANKLIN: Most definitely, and remember the Supreme Court only takes on about one percent of the cases that are within its purview. Most of the time much lower courts, federal courts, settle these cases. That becomes the law of the land. So if these vacancies that are being filled at these federal levels will have a real say in how federal law is interpreted and how state law then become interpreted based on these decisions. In addition to that I should say that the judges, that also become Supreme Court Judges, are coming from some of these very same federal appointees that are now going to be filled in with Trump picks. What we’re having here is something that’s going to have an effect for 50, 60 years in terms of court opinions and judicial opinions once Trump leaves the White House.

AARON MATE: Just to underscore how quickly Trump is moving on this, The Nation says that at this point in Obama’s presidency he had made four nominations. Now under Trump at this point it’s 17. What does that indicate to you, Kamau?

KAMAU FRANKLIN: I think it indicates a couple of things. One, most importantly, it indicates the success of the Senate under McConnell in delaying and stopping Obama from picking his own Supreme Court nominees and his other Federal Court nominees. Remember we’re here at a point where we have so many vacancies because the Senate was successful in blocking Obama appointees, including the Obama Supreme Court appointee that was to be made after the death of … His name is escaping me.

KAMAU FRANKLIN: Oh, Scalia who died last year. What we’re seeing here is the success of right-wing blocking of Obama appointees, which is now carrying over to allow Trump to make all the appointees he wants because the Senate is still in the hands of the right-wing Republicans.

AARON MATE: Finally, Kamau, let’s talk about the other side of the court that I mentioned, which is the prosecutor side. There’s this piece on the American Constitution Society by Dan Froomkin called ‘Trump’s U.S. Attorney Nominees Are Almost All White Men,’ and those stats again that I read, 42 nominees by Trump for U.S. Attorneys, 41 of them are men, 38 of them are white, one African American.

KAMAU FRANKLIN: I think what we’re seeing again is Trump revisiting or repositioning not only the Federal Courts but prosecutors in his image, and the image of the constituency that he most represents, which is right-wing white males. I think Trump believes that by appointing these people he’s going to be able to turn back the clock on civil rights protections. He’s going to make sure that police departments are no longer investigated, and that the police are no longer investigated for crimes and police misconduct against the citizens that they’re supposed to be upholding the law [inaudible]. I think having these prosecutors in there, having these Federal Court appointees in here, is really telling us that the clock is turning back, that there’s going to be a lot of other avenues that people are going to have to use because the Federal Courts are slowly going to be shifting right.

As we should remember, we have a lot of elder members of the Supreme Court who are sitting there. We’re not saying that they’ve been the most progressive folks either, but when some of these folks, if they happen to not be able to hold on and they retire, Trump is going to, at this particular stage, have a right to appoint the next Supreme Court nominee, which will surely tip the balance of the Court if things continue going the way they are.