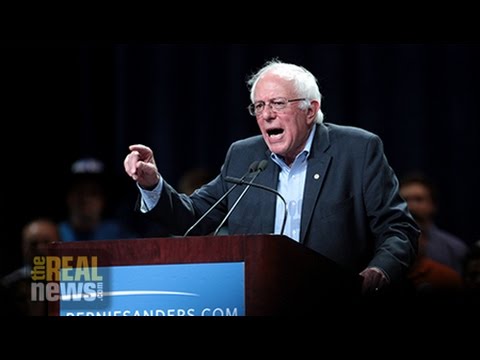 Although in recent weeks we have seen progressive black intellectuals such as Cornel West, Michelle Alexander, Ta-Nehisi Coates, and Democratic party congressmen such as Keith Ellison of Minnesota, they have all come out in support of Bernie Sanders for this presidential bid of 2016, in spite of this Hillary Clinton has a formidable lead over Bernie Sanders in South Carolina’s African-American population. However, Senator Bernie Sanders is targeting the state’s predominantly black colleges and universities, hoping that students who are debt-laden, facing few job opportunities upon graduation, will be more receptive to his message ahead of Saturday’s presidential primary in South Carolina.

Sanders addressed students at Columbia’s Allen University last Tuesday, telling them, I think we’re going to surprise people here. Well, will he? That’s a question we’re going to take up with Kamau Franklin, who is an attorney and activist from Atlanta. Thank you so much for joining us, Kamau.

PERIES: So Kamau, tell us why this is happening. In spite of all of these very prominent intellectuals and some congressmen coming out and supporting Bernie Sanders, Hillary is leading in a huge margin in South Carolina. Why is this happening?

FRANKLIN: I think some of it comes down to the basic statement of you go with the devil you know as opposed to the one you don’t know. So Bernie Sanders is not a known quantity in the black community. Up until two or three months ago his name wasn’t recognizable at all, and I think only now is he hitting a point where people are starting to know where he is. So time is simply not on his side to impress a big portion of the black community with the programs that he’s putting forth.

I think also that even though black intellectuals, at least a good portion, have come out and supported him, also remember Hillary Clinton has gotten support from black churches and from mainstream black Democratic party members. So I think the black community sees endorsements from both sides. And I think unfortunately, at least when [inaud.] with the black intellectuals, with the radical left, they don’t have enough influence in the general black community to sway that many voters.

PERIES: In spite of the same kind of climate in Nevada, Bernie Sanders came pretty close. And going into it there was a huge margin, and he succeeded to bridge that gap to 4 percent. Do you think something like that is going to happen in South Carolina?

FRANKLIN: Yeah, I think the race is going to be somewhat tighter than initially expected. I think over, again, the last few months he’s probably won over particularly young black folks, college-educated black folks. But it’s whether or not his message is sort of seeping in to folks who are churchgoers, or folks who are working class, and I would suggest that he may just be running out of time in order to get that message out there and reach enough people to change the dynamics enough to win the race.

So I think he’s closing the gap. I think whether or not he has enough time to close it sufficiently to win South Carolina is somewhat of a question. But from polls it doesn’t look like that question is going to be answered in his favor.

PERIES: Right. Bernie Sanders’ campaign has something gritty and real to it, too. You have Erica Garner, Eric Garner’s daughter, Eric Garner who was killed in New York by a chokehold, by a policeman. She has taken up Bernie Sanders’ campaign, as has the Nurses United. And they are also supporting him and you see images of, you know, a whole bunch of very working class people getting out of the buses with Bernie Sanders and following him in his campaign. Yet this doesn’t seem to be catching on when it comes to the black working class in places like South Carolina. What is Bernie doing wrong?

FRANKLIN: Again, I think some of it is the time frame in which he has to make an inroad to this community. And I would argue, again, some people would say that this community is still the most liberal community, left community, progressive community within the United States in whole. And I think that shows through the party lines in which it votes and other things. But I just don’t know if he has the time and has made enough inroads to change enough opinions in the time that he has left.

Again, Hillary Clinton is a politician who’s been on the scene for upwards of 30 years. People have known her. She still has a lot of backers who are part of leadership, let’s say, of the black community. And I think that is holding strong. She’s been in the Obama administration, and I think that counts, too. Remember, Obama still enjoys over 90 percent of black support, even if there is policy issues that black people have with him. The fact that she has connected herself to him I think really helps her keep hold of those working-class black people who align her with Obama.

PERIES: And Kamau, if you may, assume that you’re advisor to Bernie Sanders. What would you be advising him on at this time?

I mean, he has to do those kind of things to have some chance of pulling off South Carolina, and even moving forward from South Carolina when we head to Super Tuesday, hitting other Southern states that, again, have a majority black population that will be voting in the Democratic primaries. He’s going to have to get ads on their radio stations and have to get into those black churches.

PERIES: Now, Kamau, the one last thing is that if you read the media last night, the mainstream media, it’s a foregone conclusion that Hillary Clinton has all of this bagged, in terms of the leadership race and the Democratic party. Do you think so as well?

FRANKLIN: I think she has a formidable lead because she has the superdelegates behind her. I think every opinion poll that comes out shows that she still has a substantial lead, and she has the easiest pathway to getting the delegates that she needs. I think even I stated from the beginning that the corporate media was going to continually hit that drumbeat, that Hillary was a foregone conclusion, even when things were somewhat rocky or shaky. I think each debate that they had you would see the opinion-makers in corporate media constantly saying that she won those debates. She did great in those debates.

So I, I think as far as making sure that the candidate that folks felt most comfortable with coming out ahead, that the mainstream media, the corporate media, has done their job. And I, I think, you know, again, time is not playing on his side.

PERIES: All right. Kamau, we’ll be watching this as I’m sure you will be, and looking forward to having you back on the Real News Network.