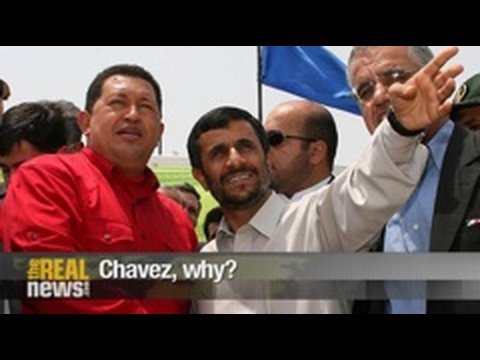 PAUL JAY, SENIOR EDITOR, TRNN: Welcome to The Real News Network. I’m coming to you today from Washington. In our ongoing coverage of Iran, we’re going to be talking to young Iranians living in different parts of the world. Today joining us is Keivan Shamami. He’s in Canada. And if he were in Tehran, I expect he’d be in the streets today. And he’s in touch with his family and friends every day by phone, and I guess to some extent on the Internet. Thank you for joining us, Keivan.

KEIVAN SHAMAMI: Hi Paul. Thanks for having me.

JAY: So, first of all, what do you hear from home today?

SHAMAMI: I talk to friends almost every day. They are still shocked, I would say. They haven’t seen this much violence. I mean, in my generation we haven’t seen this much violence, ever. So people are still shocked, because it’s still happening every day. They see people getting beaten just because they are walking in the streets. But whenever I talk to friends, they are—as I said, they are just shocked. They can’t explain anything. You know.

JAY: So give me your sense of what’s going on there. There’s been a lot of discussion and debate going on in blogs and in other parts of the media, some people suggesting Mousavi is a reformist, other people saying the camp that Mousavi belongs to is really led by Rafsanjani, who’s anything but a reformist in some people’s eyes, who’s been very associated with with much of that power and corruption of this regime. And you have other people saying Ahmadinejad represents—he’s a man of the people who represents the poor. I know you’re talking to friends every day and yourself. What is your opinion of what the different forces are here?

SHAMAMI: I’m going to talk about the economic policies and, actually, the corrupt government, Ahmadinejad’s government. I’m going to give you some examples. Let me start with a quote from President Chávez. Press TV, which is an Iranian TV, President Chávez said that people in the world have to respect the results of the presidential election in Iran. He said Ahmadinejad’s triumph was a triumph all the way, they are trying to stain Ahmadinejad’s triumph, and through that weaken the government and the Islamic revolution. I know they will not succeed. I myself, I really love what Hugo Chávez did in Venezuela, and I really didn’t expect this from him. He really disappointed some young Iranians like me. To me it seems President Chávez doesn’t know the truth. Unfortunately, he’s not alone. He’s not the only one. Most of the leftists, they simply say that the current situation in Iran is a classic struggle between the poor people and the elite, the poor people who support Ahmadinejad and the elites who support Mousavi to get more civil rights. But I believe this is not the case at all. And, as I said, I’m going to talk about the economy first. Well, let me talk about the Constitution Act 44 in Iran, which says the public sector takes care of big industries, the power generations, the power generation, big mining industries, etcetera, and the private sector is a completion to the public sector.

JAY: Let me just get clear on this. So the Constitution says that some of the major pieces of infrastructure in Iran are supposed to remain public.

JAY: The point you’re making here is Chávez has been strengthening the public sector in Venezuela and opposing privatization in Latin America, and you’re saying—.

SHAMAMI: And how come he’s fond of Ahmadinejad? So I’m going to give some examples of that. In Iran, actually, the neoliberal economists like Mr. Ahmadinejad, they accuse Mr. Mousavi to be a left populist. And, well, Mr. Mousavi’s famous because of his welfare state during the Iran-Iraq War period. I was a kid and ’80s, and I remember people standing in lines to get subsidized stuff like oil, cheese, and sugar. Every family could get coupons to buy these subsidized stuff for a very, very, very cheap price. I remember all this. But let’s see what happens in Ahmadinejad’s time. During Ahmadinejad’s time, the prices doubled in almost every 20 month, doubled in every 20 month. And the figures can be found in the Web site of the Central Bank of Iran. So we can find out the figures there. Another example, Ahmadinejad’s government gave mortgage to people to buy houses, but the house prices were doubled in few months, with very—like, very, very short time, and nobody could afford to buy a house anymore. So the people ended up paying the mortgage and interest back. Another example, in 2009—actually, this is a number given by organization which is a part of the Ministry of Economics and Finance. In 2009, the Iranian Privatization Organization announced that the privatization in Ahmadinejad’s government has been 18 times—18 times that of the period between 1991 to 2003. So here my question from people like President Chávez is how come? How come you support people like Ahmadinejad? His own government is saying that the privatization in four years has been 18 times that of the period between 1991 to 2003. Another factor is the GINI factor and, actually, Lorenz curve in economics, which are measures of inequality of income or wealth. The figures in the Web site of the Central Bank of Iran show that the GINI factor during Ahmadinejad’s time has increased, which shows more inequality of income. Now, after these examples, I’m going to talk about the economic team of each of the candidates. The people in Mr. Mousavi’s team mostly come from an institute called the Institute of Religion and Economics Studies, which was founded in the year 2000. They have written about and supported the public sector and a state-intervention economy. In an interview with the Institute of Religion and Economic Studies, Mr. Mousavi talk about taxation and said that we need new institutes to modify our taxing system to redistribute tax between the lower class. Let me give you some examples from ’80s, some figures from ’80s, when Mr. Mousavi was prime minister. The infant mortality decreased from 140 per 1,000 to 68 per 1,000. Illiteracy decreased from 60 percent to 40 percent. The number of people under poverty line decreased from 45 percent to 25 percent. These are the figures given by Mr. Mousavi in the TV debate, and nobody disputed them.

JAY: So just to be clear, these are what you’re saying the achievements of Mousavi when he was the prime minister.

JAY: Now, let’s say we should—one needs to note again, there were a lot of slaughters of prisoners during that time, Mr. Mousavi’s primeministership, as well.

SHAMAMI: Exactly. Yeah. I was going to talk about that, actually. I’m just talking about the economy now and his achievements in economy. For sure, nobody will forget the mass execution in 1988. So we expect Mr. Mousavi to answer us if he was aware of that or not. Yes, he was, because he was prime minister. But he has to talk about this. He once, actually, answered the students in his election campaign. Somebody asked him, in the university, what is his stand on that. And he said, well, that was the Judgment Department. I didn’t know that they are separate from the state. He basically didn’t want to answer at that time. I was talking about the economic team of each of the candidates. I talked about Mr. Mousavi’s team. Now I’m going to talk about Mr. [Mehdi] Karroubi’s economic team.

JAY: Now, this was one of the other candidate more reformer candidates that was running as well?

SHAMAMI: That’s right. Yeah. We can see people like [inaudible] who have neoliberal ideas. In their economic policy, they want to give cash to everybody every month. And there will be less subsidization on fuel, food, etcetera. They also accused Mr. Mousavi to be a left populist. In Ahmadinejad’s team, we have people like [inaudible] and [inaudible] who believe in a weird kind of economy. It’s called Islamic economy. We don’t know what it is, but it’s proof that Mr. Ahmadinejad’s government is the most corrupt state after the revolution. This state is—I would say this state is made based on lies. Let me give you some examples.

JAY: Okay. Before you give us examples, let’s do this in the next segment of the interview. So just to sum up, your point so far is there’s a kind of left critique of Mousavi coming from Chávez and many other forces in the blogosphere who have accused Mousavi of being kind of a neoliberal and Ahmadinejad as being the man of the people. And many people have suggested this kind of movement is kind of an American-orchestrated or -fueled movement. And your point here is Mousavi actually is more in defense of the public sector than Ahmadinejad. In the next segment of our interview, we’ll talk with the whole question of corruption, the role of the Revolutionary Guard, Ahmadinejad, and the supreme leader himself. Please join us for the next segment of this interview on The Real News Network.

Keivan Shamami is a PhD student in Canada. He has done research on child labor and been involved in educating Afghan kids in Iran.