As Trump and the Republicans target vital social programs in their budget, a new study from the London School of Economics shows that poverty has a huge impact on children's cognitive, social-behavioral and health outcomes

As Trump and the Republicans target vital social programs in their budget, a new study from the London School of Economics shows that poverty has a huge impact on children's cognitive, social-behavioral and health outcomes 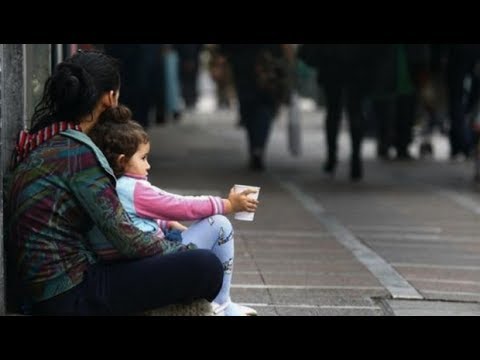 AARON MATE: It’s The Real News. I’m Aaron Mate. The House Budget Committee has approved the Republican plan for federal spending in 2018. Like President Trump’s recent budget proposal, the House measure would massively increase military spending while sharply cutting everything else. The cuts to social programs include vital services for low income families and their children. Advocates say all this could endanger millions of lives.

Well, a new study provides a window into how. Researchers at the London School of Economics say there’s a strong causal effect between child poverty and cognitive social behavioral and health outcomes. Kerris Cooper is a researcher and doctoral candidate at the London School of Economics and Political Science. She co-authored the study, “Does Money Affect Children’s Outcomes: An Update.” Kerris, welcome.

KERRIS COOPER: Thank you for having me.

AARON MATE: Thanks for joining us. Your study is a pretty comprehensive review of the evidence we have on the effective of household income on children’s development and their outcomes. What are some of the key areas that you looked at?

KERRIS COOPER: Well, I think it’s important to say first of all that we only looked at causal evidence, which is really hard to come by in social science. You know, we know that low income is associated with worse outcomes for children, but often there are other factors that could be driving these changes. We looked at randomized control trials, quasi-experiments and studies that tracked families over a period of time, looking at changes of income and changes in their children’s outcomes.

These, the kind of evidence that we reviewed is evidence that we can be really confident about measuring the causal effect of income. We looked at a range of different outcomes, so we included cognitive development and schooling outcomes for children up to the age of 18. We looked at their physical health, and that includes things like birth weight, but also their general health. We also looked at social and behavioral development, so externalizing problems, internalizing problems and problem behaviors. We also measured what we call intermediate outcomes. These are factors that we know are important for children’s outcomes. Things like the home learning environment, mother’s mental health, which we have some really strong evidence in relation to that and also parenting behaviors. We found that in each of these areas, we have evidence that when income increases, these things, these outcomes improve and some evidence that when income decreases, these, there are negative effects of that as well.

AARON MATE: Let’s talk about this evidence. What causes these differences in child development?

KERRIS COOPER: Well there’s likely to be a number of different channels. The intermediate outcomes that I mentioned give us a clue to what’s going on. We know there’s a lot of strong evidence that shows that mother’s mental health is really important for children’s outcomes. That’s partly because mother’s mental health affects their parenting behaviors. It’s also likely to affect their children’s outcomes for other reasons.

That’s actually an area where we have a lot of strong and recent evidence that money really makes a difference. When income decreases, mothers are more likely to experience symptoms of depression and anxiety and when these kind, when low income is alleviated by an increase in income, their mental health is likely to improve. We know that’s likely to lead to improvements in children’s outcomes. That’s probably partly what’s explaining these improvements in children’s behavioral outcomes, social outcomes and also schooling outcomes.

AARON MATE: What degrees of poverty or low income did you look at?

KERRIS COOPER: Well the studies, the studies are quite varied in what they looked at, so some studies looked at whole populations in countries, so I should say this is evidence from OECD and EU countries. The majority of the evidence actually comes from the US because we were really interested in this causal evidence and the US is more able to make use of randomized control trials and quasi-experiments, looking at differences between states. That’s where a majority of the evidence comes from.

Some studies focused on families that were lifted out of poverty. Other studies looked at families all the way up the income distribution that had changes in their income. It’s really a broad, from a broad evidence base, we have evidence that money really matters. We know that it matters more at the bottom end. Some of the studies that we include, they found that increases income were important but only for low income groups. Increases in income for middle income families didn’t make as much difference as increases in income for those at the lowest end of the income distribution, so households in income poverty.

AARON MATE: I want to add some of the neuroscience angles here because it’s very interesting. There are studies that show there’s a link between poverty and children’s brain development. There was a piece in The New Yorker a few years ago called, “What Poverty Does to the Young Brain,” by Madeline Ostrander. I want to just share with you a couple of interesting examples that she gave.

She talks about a study in the journal Nature Neuroscience where researchers from nine hospitals looked at more than 1000 children and they collected DNA samples. They made MRI scans of children’s brains and collected data on their families’ income level and background, and gave them a series of tests. One of the interesting things that they found, more educated families produced children with greater brain surface area and a more voluminous hippocampus, but income had its own distinct effect. Living in the lowest income bracket left children with up to 6% less brain surface area than children from high income families. That’s a neuroscience angle here, talking about the link between poverty and actually how children’s brains develop.

KERRIS COOPER: Yeah. None of the studies we reviewed were neuroscience studies, but I think that kind of evidence complements what we found. Some of the other areas that we measured were things like, as I said before, physical health, social behavioral development, but also things like food sufficiency. We found that income makes a big difference to food sufficiency, so I think these kind of different … It’s easy to see how there are lots of pathways by which income can affect children physically, their physical health or in the case of the neuroscience evidence you’re talking about, their brain development as well as their educational outcomes, their home environment, the kind of stress that is experienced within the household

AARON MATE: You mention food. I want to get to the policy implications of your study, but before I do, I just want to share one more. Because it’s just fascinating to me. Neuroscientists at four universities scanned the brains of group of 24 year olds and found that in those who had lived in poverty at age nine, the brain centers of negative emotion were more frequently buzzing with activity whereas the areas that could reign in such emotions were quieter. Getting to the policy implications here, what do you think are the major lessons we can take away from your study in terms of setting social policy?

KERRIS COOPER: Well I think it really underlines the importance of protecting family incomes. For instance, in the UK we’ve had an increase in child poverty and it’s forecasted to increase even further. This suggests that we’re actually, we already know that children from low income households are doing worse than other children and there’s likely this gap between them and other households, other children from other households. It’s likely to get even wider if we don’t do things to ensure that families have enough income to meet their basic needs.

It suggests that we cannot just spend on schools or invest in parenting classes or … You know, I’m not saying that those things aren’t important, but this evidence shows that actually family income really, really matters for children’s development. If child poverty is increasing, you’re kind of fighting a losing battle if you’re going to be spending on other areas, but at the same time family incomes are going down. It’s very unlikely that you’re going to be able to protect children’s outcomes.

What I mean by protecting family incomes is not just ensuring that work pays enough, because we know that over 50% of people that are in poverty are actually in working households. This also means making sure that benefits, when people need to rely on the social security, the safety net, that benefits also meet families’ and children’s needs. As I said, in the UK, this is not what’s happening at the moment. We’ve actually got a benefit freeze. Families that really don’t have much money, their incomes are being squeezed even more and this evidence really underlines the need to address this and to start changing the way that we do policy.

AARON MATE: Kerris Cooper, researcher and doctoral candidate at The London School of Economics and Political Science. Her study is, “Does Money Affect Children’s Outcomes: An Update.” Kerris, thank you.

Kerris Cooper is a researcher and doctoral candidate at the Centre for Analysis of Social Exclusion, the London School of Economics and Political Science. Her research interests are in poverty and inequality. Her most recent research is a systematic review of the evidence on the effect of household income on children’s development.