Baltimore workers, struggling to make ends meet, call on the city to raise the minimum wage

Baltimore workers, struggling to make ends meet, call on the city to raise the minimum wage 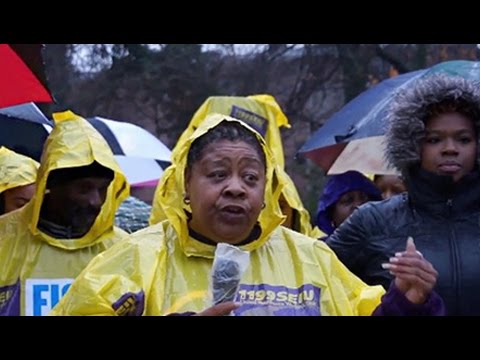 KIM BROWN, TRNN: Workers from fast food chains in nearly 20 airports join nationwide protests for higher pay, union rights, and immigration reform on Tuesday in their first major action since businessman Donald Trump, won the presidential election. In New York City, more than 200 protestors held a [inaud.] rally outside of a McDonald’s restaurant where they chanted slogans calling for a federal minimum wage of $15 an hour. Here in west Baltimore a couple of dozens of supporters rallied across the Blue Point Healthcare Center near Sinai hospital.

DEBORAH DALTON: I came out here in this rain, it would be hail, sleet, or [inaud.]. I will be here because we are worth 15 dollars. We work too hard and we are too dedicated. We love what we do, we love our residents, and we want what we deserve.

JALICIA WASHINGTON: I love the work I do but making what I do, I don’t feel like I am valued at work. I give them my all plus more when it’s needed. My wages should reflect what I put into my job. I’m calling on the city council to take action and raise the wages for Baltimore workers.

I mean in the meantime it just means I have to continue doing what I’m doing and that’s living paycheck by paycheck and trying to make a way.

BROWN: How many hours a week do you work?

WASHINGTON: I work 80 hours a week.

BROWN: And how are you able to meet your financial obligations? Raising your child?

WASHINGTON: I mean, I have a nice support system. My mother, their fathers, they help me out as much as possible. Sometimes ends don’t meet and I have to brush things off and try to pick it up on the next paycheck.

MARY PAT CLARKE: I have been touched but it is by this issue and by the need and by the people who worked everyday and still can’t make ends meet.

BROWN: Baltimore City Council Woman Mary Pat Clarke initially introduced the proposed bill to raise the minimum wage here in the city. Now had it passed the council in an August vote, Outgoing mayor Stephanie Rawlings-Blake said that she would’ve signed it. But it didn’t pass and there’s no guarantee that incoming mayor Catherine Pugh will approve it.

Council woman Clarke says that she expects the new city council that will be sworn in in December to move the bill forward.

Mayor elect Catherine Pugh has expressed a support for raising the state minimum wage, as opposed to Baltimore City doing it’s own. If the city council passes the fight for 15 bill that you’ve proposed, do you expect Catherine Pugh to sign it into law?

CLARKE: I would hope so. She’ll have the legislative session in Annapolis, will be complete I’m sure, by the time we ever get to agree to vote. I know she has great influence in Annapolis. We feel that if we can get this passed in Baltimore, we’ve got DC, Montgomery, Prince George’s. It just creates wind on her back, when she goes there.

RICARRA JONES: So last year our bill in Baltimore had a delay but this year we’re back at it. We have a plan to add Baltimore to the growing list of cities and states who’ve increased minimum wage to $15.

BROWN: Even if this vote is able to pass the council, how likely is it that mayor-elect Catherine Pugh will sign this into law, given that she’s expressed support for raising the state wide minimum wage to $15 and not so much just for Baltimore City.

JERMAINE JONES: I’m just so excited to be here in support of not only the members of 1199 SCIU but on behalf of all workers, everybody. Because there should not be a person in this country, especially this city, that will work 40 hours a week, do everything that’s asked for them at work but still have to make a decision whether or not they’re going to pay their electric bill or eat.

BROWN: It was august of this year the last time the Baltimore city council took up the issue of whether to raise the city’s minimum wage of $15 an hour. That measure only failed to pass by 1 vote. However, councilwoman Mary Pat Clarke who is the bill’s lead sponsor, tells us she hopes to reintroduce the bill again in January and when she does, there will be 8 new incoming members of the council present to take up the issue of whether or not to do this for Baltimore City. However, the downside to that is you will also have a new mayor. Mayor elect Catherine Pugh who has not expressed a whole lot of support for this issue. So we’ll see what happens as the vote comes up.