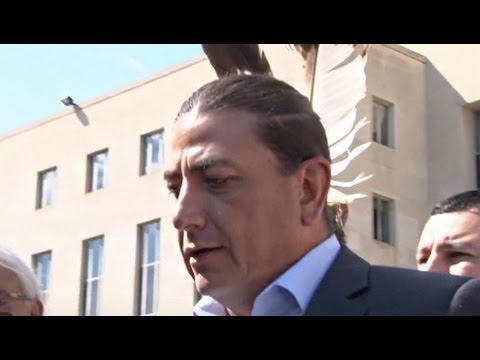 SPEAKER: And I stand here today with Standing Rock as my children, I worry about what they’re going to drink. We do not deserve to drink oil. We deserve to have mother earth taken care of rather than damaged and destroyed. We have to stand up and fight as our grandparents did. Our late grandparents, great grandparents. It goes on and on.

KIM BROWN: It’s the Real News Network. We are broadcasting from Washington D.C. outside of the U.S. district court house. The Standing Sioux Rock Tribe is out here contesting and protesting against the constructing of an oil pipeline that will run directly through the reservation. People came from all over to participate in this. What’s your name?

BROWN: Jasmine where did you come from in order to join today’s protest?

APPLETON: I came from the [inaud.] territory, Onondaga.

BROWN: And where is that?

BROWN: Oh in New York state. So you traveled some distance. So tell us why is this so important for you to show up and stand in solidarity with the Standing Sioux?

APPLETON: Well last year we protested against our lake being polluted from all the factories dumping all their waste and we know the outcomes of it. We can’t fish there; we can’t do anything there because it’s all so polluted. So coming out here it’s like we get to do something that we couldn’t do back then. Coming out here we get to help save water that we didn’t get to save at home. So it’s a really big thing because I’m part African and having family from Africa that don’t get clean water, why would we pollute it and make it worse when there are people out there that don’t even have water to drink? So I feel like it’s really important and that we save as much water as we can.

BROWN: As we just said, there’s a lot of people traveling who came from some considerable distances to come out here in front of the US district courthouse to voice their opposition to the destruction of the Dakota Access Pipeline that will stretch across the Standing Rock Sioux Tribe’s reservation. We have three ladies here. Can you introduce yourselves please?

KELLY: Hi my name is Kelly.

BROWN: Okay ladies show everybody your signs. What does this signage say about what brought you guys out here today?

KELLY: So we’re actually Penn State students. We just started class on Monday so sorry mom and sorry professors but we’re out here because we feel like this is an important cause. We are non-Native allies and we think that, well we’re certain that this pipeline cannot go through. It’s going to destroy the water. It’s going to destroy livelihoods and we can’t let that happen and that’s why we’re here.

SPEAKER: And this is just one pipe. There are many battles to come. What happened today we got our chance to be heard in federal court. There was no decision by the judge, not yet. He said possibly two weeks. There will be no drilling under Missouri River until they get a notification done by the congress.

BROWN: We’re standing outside of the D.C. courthouse and we’re speaking to the attorney representing the Standing Rock Sioux Tribe, Jan Hasselman with Earth Justice. [Yan] tell us what happened today. What was the outcome?

JAN HASSELMAN: Well the outcome’s a little disappointing in the sense that we didn’t get a decision that we wanted. We want to know whether the construction of the pipeline will have to halt until this issue can be resolved and the judge said he wasn’t going to be able to do that for a couple weeks. So what happened is we all came in. We told our side of the story. There were many many people from Standing Rock. Elected officials, tribal members. They came all the way from the Dakotas to be here today. We had an opportunity to share a little bit of our story with the judge and we’ll see what he does.

BROWN: So tell us what the defendants had to say for themselves. What does the US Army Corp of Engineers, what is their rational for wanting to put this pipeline across a reservation where people live and along a body of water that people come to depend on daily?

HASSELMAN: The Army Corp of Engineers base of response to this case is that it’s not our problem. That they have a very narrow area of jurisdiction and they’re going to look at things as narrowly as they can. That’s the key issue in the case. Do you look at this in a very narrow way and ignore the broader issues? Not only to cultural sites and sacred sites but the most important issues is the risk of an oil spill.

SPEAKER: You never know what is going to happen for real when you go from movement to action.

SPEAKER: I’m here with an individual for the moment to see what’s going on with this very special situation that’s developing in South Dakota. North Dakota, South Dakota, mostly North Dakota with the worst. But people that come together to put the [lance] on the ground and say here stop. So when a people does that it’s a really important time. It doesn’t happen very often because this is a—the pipeline, the head of it, they’re at the edge of it. Stopping it. So it’s a point of confrontation. It’s a point of decision. So I want to remind the young people because I’ve been at this for a while, I want to remind the young people of the organizations that if they keep it peaceful and bring up the people and they really support what’s going on out there, those people won’t get run over. And something just might start that makes a country question the oil economy once and for all. There’s been a lot of talk about it. But things keep going like nothing happened and the contamination keeps going. And I have 11 grandchildren that I worry about because the water’s everything.

BROWN: And where is your nation located?

SPEAKER: My people are from the Caribbean. Cuba, Puerto Rico, Dominican Republic. My particular family’s based at [inaud.] Mohawk reservation, where my wife is from. And they’re here. The whole [inaud.]. The [Sioux] Nation’s people are here. Mohawks are here. Many many tribes have signed on to this. Many many tribes. That doesn’t happen that often that people unite around a particular issue. So when that happens I know to pay attention because its either or now and its time for the people to come out. This is the time for the people to come out and it’s a really on the edge situation any time you stand up to such a huge industry. Many things can happen.

BROWN: A very hot and sweaty August afternoon was not enough to deter two to three hundred demonstrators. People standing in solidarity outside the US district courthouse here in Washington D.C. The Standing Rock Sioux Tribe lawsuit still lives to fight another day versus the US Army Corp of Engineers to prevent the construction of the Dakota Access Pipeline. However, the judge says that they do not expect to receive a decision for another two weeks. So as of right now the fight continues. Live from Washington D.C. for the Real News Network, I’m Kim Brown.