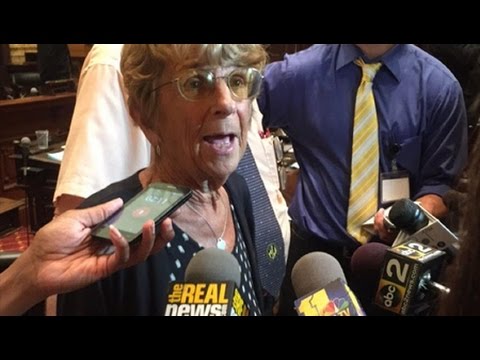 Tonight’s vote about the $15 minimum wage is expected to be a very close one. Eight votes are needed to pass the measure, and it’s not clear whether or not those votes are in the pocket yet.

SPEAKER: The ordinance for the purpose of setting Baltimore City’s minimum wage rate through the years 2016-2021.

MARY PAT CLARKE: –Make a motion to refer this legislation back to committee because of an amendment that needs to be added to and requires a hearing for full understanding. I would be glad to if I get my second explain that if necessary. Call the vote.

SPEAKER: Mr. President, what are we voting on? Oh, back to committee?

SPEAKER: We’re voting for her to send it back to committee.

SPEAKER: Okay. The bill goes back to committee.

BROWN: Lead sponsor of the bill Mary Pat Clarke explains about the last-minute amendment that is sending this back to committee.

CLARKE: This issue–last Monday was the first time I ever knew the National League for the Blind had a problem with any amendment here. We worked with all kinds of disability groups, like People on the Go and [Max] and everything else. We met with them. We worked with them. We thought our amendment was okay. They showed up, they demanded to meet, like that gentleman just a couple minutes ago. And I said, I’ll meet with you. And Wednesday we met. And they, they insisted that it had to be clarified and it had to be done in the original model, quote-unquote, bill.

And so I said, okay, I’ll make a motion to send it back to be heard and to be adopted, because I don’t want someone else showing up after we do this and saying they have a problem. Come one, come all, and let’s get this straightened out. And I will do that. I can’t guarantee that I can get the motion passed.

BROWN: Labor leaders like Ricarra Jones from SEIU 1199 are glad that the measure is not dead.

RICARRA JONES: We understand why it happened. It had to go back to committee because it’s not a complete bill. And we want to make sure like everyone else that a complete bill goes forward for the workers of Baltimore City. So we know it’s not over. We just look at it as a little bit of a delay.

JONES: No, because I mean, we want to make sure we get the best legislation passed. And we trust that the city council, they’re going to do what’s right, we’re going to get this back out of committee, and you know, we’ll get a raise for workers of Baltimore City very soon.

BROWN: The unexpected amendment to include employees with disabilities is probably the reason why the $15 minimum wage measure remains alive tonight in Baltimore City. So what’s going to happen is it’s going to be sent back to committee. Still not clear whether or not this will be the city council to ultimately make this decision. The vote may be delayed until after the new city council is sworn in after election day in November. But what remains clear is the Fight for $15 certainly will live to see another day here in Baltimore tonight.