Ricarra Jones of SEIU: Some councilmembers have forgotten that they previously voiced support for a $15 hourly wage

Ricarra Jones of SEIU: Some councilmembers have forgotten that they previously voiced support for a $15 hourly wage 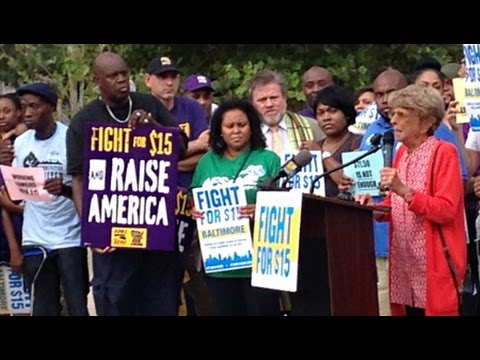 As it stands now, the minimum wage across Maryland is $8.75 an hour. Now, this is going to go up to $9.25 an hour by July of next year, and will reach $10.10 an hour by the year 2018. Yet a vote by the city council on Monday could change the minimum wage for Baltimore specifically. Council woman Mary Pat Clarke proposed a $15 an hour minimum wage hike for jobs located within the city. Now the preliminary bill fell short of passage by just one vote and the package that would be voted upon this Monday would come with an exemption for small businesses and an agreement that the $15 an hour minimum wage won’t take effect until the year 2022.

However, this is far from a done deal. Both sides of the issue are lobbying city council members hard and today we’re joined in studio with Ricarra Jones. She’s a political organizer with SCIU 1199. She joins us today. Hello, Ricarra.

RICARRA JONES: Hi. How are you? Thanks for having me.

BROWN: Thanks for being here. Well we have been covering this issue and following it pretty closely. We understand how tight a vote this is going to be on Monday with pretty much the council evenly divided. Now SCIU is in favor of raising the $15 an hour minimum wage. Tell us why?

JONES: Well it’s actually–we’re actually a part of a huge coalition, national, that’s been happening across the nation, that we’ve been seeing in cities and states. But our coalition consists of community members, there’s faith leaders, there’s other leaders, and I think that we’ve all just decided to come together because we look at our city and we realize that people here are suffering, they’re struggling, and one of the things that we can try to do to improve our city is raise wages for people who live here.

BROWN: So give us an idea about your typical member who is a Baltimore city resident who may be working a minimum wage job now. What would that mean for them if this wage were to go up to $15. Granted it won’t reach that peak until another several years. But what would this increase mean to one of your members?

JONES: So we just released a report about 2 weeks ago that looked at nursing home workers. So we represented nursing home workers across the city. And people know that this is physical work. It’s very demanding. There are long hours. And they don’t even make enough money to care for themselves.

So they spend all day in nursing homes taking care of elderly and sick patients and when the go home they can’t care for their own families because they don’t make enough money. So allowing them to make $15 an hour would mean they wouldn’t have to work 2 jobs. They could actually probably be home with their kids in the evening. They wouldn’t have to take double shifts and end up being tired and overworked. They would have more money just to provide for their families.

BROWN: The vote that just happened this past Monday, so there’s two votes. The vote that happened Monday and then the upcoming vote on the Monday. Last Monday’s vote came with 2 council members abstaining completely from the vote and that was councilman Carl Stokes and councilwoman Helen Holton. And the reasons that they gave were numerous and varied. But it kind of came down to council woman Holt and it was concerned that county workers, people who live outside of Baltimore city would come and actually displace city workers out of potential $15 an hour jobs. What do you have to say that?

JONES: So I think that the opposition always like to bring fear. That’s always what they rely on is just fear that these people are just going to come and steal our great jobs. And my response to that is does that mean that the workers of this city should suffer? That we should keep wages low so that we can keep everybody out of our city?

I don’t, that’s the answer. I think that we have to raise wages for people who live in our city and you know cause that’s the best that we can do for our city. We can’t live on this feat tactic that these people are going to come in and take our great jobs. And I think that with Carl Stokes and Helen Hogan abstaining, if you look at their districts and where they live and where they represent, if they wake up and they go outside their doors, they can see people who clearly need to make more money.

BROWN: You know, Councilman Stokes, we actually sat down with him and the reason he said that he won’t vote flat out no is because of the relationships he has with unions and the labor movement. How will this affect how unions and labor identify with whom they lend their support to on the city council going forward.

JONES: Well first off, I think that this is just bigger than a labor or union issue. Which is the reason why our coalition is so diverse. Because it’s not just a labor issue like some people like to paint it.

And second, I think a lot of organizations, community organization, labor organizations, prior to deciding who to endorse, they do question theirs. And they have these very honest conversations. Like do you support raising the minimum wage to $15?

Carl Stokes told us yes. He said that he supported raising the minimum wage to $15. Eric Costello also said yes. Jack Young also said yes. So you know, for us and for I think a lot of other organizations going forward, you know these candidates put these things in writing when they want your endorsement.

Then when it’s time to vote on them, sometimes they do things differently. For us that’s going to be, we’re going to have to make decisions in the future about where we decide to put our resources. And that’s our members’ support and financial support also.

BROWN: You know speaking of councilman Eric Costello, he was a no vote on Monday and he has been on the record as saying he would like to support a minimum wage increase for Baltimore as long as it doesn’t come at the expense of small businesses. Now some of the amendments that were agreed upon sort of take the sting out of that a little bit with businesses with 25 employees or less, businesses who make annual revenues of half a million dollars or less being exempted from this.

But councilmen Costello he seemed to echo a sentiment that’s also being repeated by the business community, by the Restaurant Association of Maryland, by the Great Baltimore Committees, these pro-business organizations, saying that why put the unfair burden on Baltimore only to raise its wages, if Anne Arundel County’s not raising their wages. If Baltimore County’s not raising their wages. The state of Maryland is not prepared to meet the city at this $15 an hour benchmark, then why should Baltimore bear this brunt alone?

So to call it a burden, I think it’s very unfair. And also, I think Baltimore is unique. It’s not like the surrounding counties. We just had 7,000 evictions. I don’t think they’re facing 7,000 evictions. And that’s because we have a housing crisis and we also have an income crisis.

People can’t afford to live in the city of Baltimore with such low wages because you see there are so many [vacants] and so many people who are facing eviction and have to have their homes and their families disturbed. And it’s because they can’t pay the rents in Baltimore City.

BROWN: So when we talk about the current minimum wage right now in the state of Maryland, $8.75 an hour. For people who are working minimum wage jobs even full-time and are still having problems making ends meet. What are you hearing from people who find themselves in that situation? Do they even think that raising the minimum wage is good for the city? Because some believe that it’s going to possibly hurt the city by driving businesses away. By possibly businesses passing those increased costs onto the customers and consumers. Are people in favor of this?

JONES: Yeah, I mean, we’ve had–I think the reason why the vote last Monday went so well is because all that we’ve been doing as a coalition is telling people to call their city council leader and tell them their stories. Tell them what’s going on, how their day to day life is, how much this would mean to them. And honestly, the response we hear the most is, why do we have to wait till 2022. Like you know we hear that all the time. I need $15 today. That’s the number one response that we hear all the time is that people want it today and they need it today.

BROWN: So give us an idea, procedurally from the council. So, should this measure not pass, this is something that is not likely to be raised again with the incoming city council that will be sworn in next year.

BROWN: We will certainly see how the city council vote transpires. I believe it’s scheduled at city hall, Monday evening at 5:30. I was out there last Monday. There were certainly a lot of representation from the labor community. And like you said, not just the labor community but a coalition of Baltimore workers out there supporting this measure. But we have a very strong business lobby in this city. So we will definitely see how this goes down.

We have been joined today with Ricarra Jones. She is a political organizer with SCIU 1199. Ricarra, thank you so much for your time.