In a nation-wide occupation movement, artists in Brazil fight the impeachment of Dilma Rousseff and lead a protest against newly instated right-wing government

In a nation-wide occupation movement, artists in Brazil fight the impeachment of Dilma Rousseff and lead a protest against newly instated right-wing government 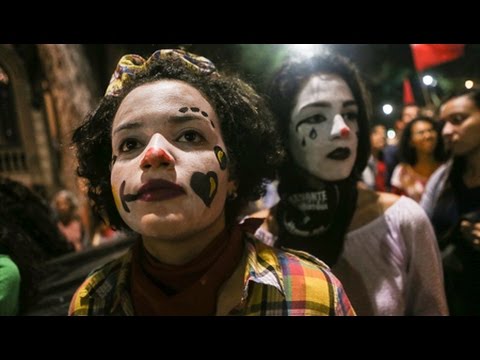 NARRATION: It’s been over a month since Brazil’s Senate voted to suspend and, ultimately, impeach President Dilma Rousseff. This left then-Vice President Michel Temer and his right wing cohort to take up power. Temer’s presidency has sparked outrage amongst some Brazilians, especially artists.

“So at this time I can say that I support Dilma. I did vote for Dilma, but even if I had not voted, I would still support Dilma at this time because I really think this impeachment is a coup. If a coup is pulling a person who was democratically elected from power, then this is a coup.”

NARRATION: Public outrage grew even stronger when three of Temer’s ministers were recently forced to resign because of their connection to a major corruption scandal. Temer himself has also been implicated in corruption scandals, and is now banned from running for office for the next eight years.

Over this past month, artists across the country have been occupying their local cultural ministry-buildings in protest of Temer, calling his government illegitimate and corrupt. The occupations have now spread to almost every state.

“Artists, and people who make up the country’s democracy, we reject the legitimacy and do not recognize this imposed government as the authority to make decisions about public policies.”

NARRATION: The occupation of the cultural ministry building began in Rio de Janeiro after Temer announced that he would close the Ministry of Culture. Temer eventually reversed his decision after several well-known Brazilian artists protested and rejected his policies.

But even though the Ministry of Culture remains, artists refuse to leave and continue to demand that Temer be removed from power.

“It’s not just culture we care about. We are here for many reasons, because we are against this completely illegitimate government. So, in everything that this government has done – for us, there is no dialogue, there is no kind of recognition.”

NARRATION: Many have called the Temer government a major step backwards, saying it is eliminating policies that were created after the fall of Brazil’s violent 20-year dictatorship; policies that were meant to encourage democracy and equality.

“This ministry has a practical and symbolic importance because it’s a ministry that for 30 years has been run and organized so that culture would be really valued in this country, [since r the fall of the dictatorship].”

NARRATION: In the mere weeks since Temer came to power, he has introduced austerity measures that will

reverse many of the progressive policies created by Rousseff and the left-wing PT government, which had been in power for the last 13 years.

And while the Ministry of Culture remains open, Temer has eliminated several other progressive ministries, and replaced all the ministers, creating a cabinet entirely made up of white men–what Brazilians say do not represent their diverse population.

“The policy of reducing the ministries, reducing the public structure, and the privatization of state enterprises is a defeated policy. And even more, it comes in an authoritarian manner from a government that is not legitimate, and does not respond to the concerns of the population.”

“The answer I hope for is that the government sees that people are not sleeping, that the population will resist everything that is a regression, everything that symbolizes a step backwards. We are here to resist so that the country advances.”

NARRATION: Not everyone supports President Rousseff, who has grown very unpopular over the past years. But there is a consensus among all protesters that Temer’s government must go. The artists are demanding that either Rousseff return to finish her term, or that new elections be called immediately.

“President Dilma was the president that Brazil elected and it’s legitimate for her to finish her term. And from there, we can think about her using the rest of her term to construct a new kind of politics: political reform is very urgent.”

NARRATION: Protesters say they are willing to maintain the occupation for as long as necessary.